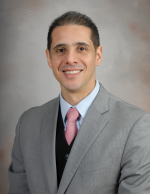 Cesar A. Arias, M.D., Ph.D. is an infectious disease researcher at The University of Texas Health Science Center at Houston (UTHealth)

Newswise — Cesar A. Arias, M.D., Ph.D., associate professor in the Division of Infectious Diseases at The University of Texas Health Science Center at Houston (UTHealth) Medical School, has been elected to the American Society for Clinical Investigation (ASCI). It is an honor society comprised of more than 3,000 physician scientists.

Members are elected for their scholarly achievements in biomedical research. Arias’ research is focused on antibiotic-resistant bacteria known as superbugs, which claim the lives of approximately 23,000 Americans a year. He runs research laboratories in the United States and Colombia.

“Cesar A. Arias is an internationally known physician-scientist, whose major contributions involve recognizing and characterizing novel aspects of antibiotic resistance in Gram-positive pathogens, particularly in the areas of molecular epidemiology and mechanisms of bacterial multidrug-resistance,” said Barbara E. Murray, M.D., director of the Division of Infectious Diseases and holder of the J. Ralph Meadows Professorship in Internal Medicine at UTHealth Medical School.

“Examples include his innovative work on resistance to daptomycin, the drug of last resort for enterococci, and on vancomycin resistance in a community clone of staphylococci. He has also been pivotal in promoting antimicrobial resistance research in developing countries,” said Murray, who is the immediate past president of the Infectious Diseases Society of America and who nominated Arias for membership into the society.

Arias leads the Laboratory for Antimicrobial Research at UTHealth Medical School. Receiving support from the National Institutes of Health (R01-AI093749), this laboratory studies the clinical and molecular aspects of antibiotic resistance in an effort to better understand the complex mechanisms by which superbugs become resistant to antibiotics. Researchers then design strategies to fight superbugs.

Arias is also founder and scientific director of the Molecular Genetics and Antimicrobial Resistance Unit at Universidad El Bosque in Bogota, Colombia. This research unit, created in 2000 with the support of the British Wellcome Trust, is a major surveillance center for resistant pathogens in South America.

Working together, researchers in these laboratories have identified novel mechanisms of antimicrobial resistance and unusual trends in antibiotic-resistant bacteria. In addition, they have characterized the emergence of clinically important superbugs. For his innovative work, Arias has been a recipient of the Wellcome Trust International Fellowship, NIH Pathway to Independence Award (K99/R00), American Society for Microbiology ICAAC Young Investigator Award, the Isidro Zavala Trujillo Medal by the Pan-American Society of Infectious Diseases and the Oswald Avery Award for Early Achievement from the Infectious Diseases Society of America, among others.

Arias received his medical degree from Universidad El Bosque, Bogota, Colombia in 1992. He obtained his MSc in clinical microbiology from the University of London in 1996. In 2000, he received his Ph.D. in molecular biology and microbial biochemistry from The University of Cambridge, Cambridge, United Kingdom. Arias carried out his internal medicine residency/infectious disease fellowship at the UTHealth Medical School and The University of Texas MD Anderson Cancer Center. He is on the medical staff of Memorial Hermann-Texas Medical Center and Harris Health System’s Lyndon B. Johnson Hospital.