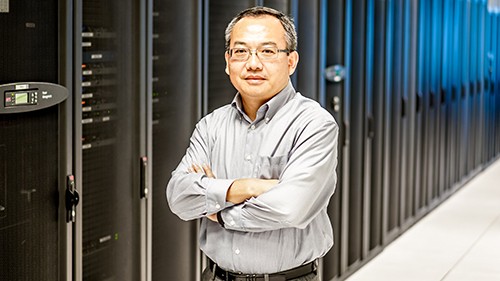 Newswise — In keeping with the shift in cancer research from data generation to data analysis, bioinformatician W. Jim Zheng, Ph.D., of The University of Texas Health Science Center at Houston (UTHealth) has been awarded a five-year, $5.8 million Cancer Prevention & Research Institute of Texas (CPRIT) grant to sort out information that could lead to cancer cures.

Zheng was one of two faculty members awarded grants from CPRIT during the summer round of awards. To date, UTHealth has received 51 grants totaling to a combined $71 million.

Despite advances in cancer care, the disease still claims approximately 100 lives a day in Texas.

“The research into the causes of cancer using the latest technology has generated huge amounts of data,” said Zheng, associate professor and associate director of the Center for Computational Biomedicine at UTHealth School of Biomedical Informatics. “The challenge now is to sift through the sea of cancer research data to find cures.”

To that end, Zheng is using the grant to establish the Data Science and Informatics Core for Cancer Research at UTHealth, which will have the big data infrastructure needed to identify links between cancer and other diseases. “In five years, the vision is to develop the tools to analyze cancer,” he said.

The facility, according to Zheng, will advance cancer research by making the latest computational methods to analyze cancer data available to scientists throughout the Lone Star State and then expand beyond state lines. Digital health records are revolutionizing cancer research by making it easier for scientists to analyze big databases, Zheng said. One database alone includes 50 million patient records.

“A paradigm shift is underway in cancer research,” Zheng said. “We’re moving from hypothesis-driven research to data-driven research. Mining the data will provide clues as to the causes of cancer.”

Zheng’s team has both the computer algorithms and computer storage – 1,000 terabytes – needed to analyze large data sets. The facility will be housed in UTHealth’s School of Biomedical Informatics, which is the only freestanding school of biomedical informatics in the country.

“I have always been interested in fighting cancer,” said Zheng, whose father Yeming Zheng succumbed to the disease in 1995. “I believe we can make a difference.”

CPRIT has awarded 1,189 grants totaling more than $1.89 billion. The agency began making awards in 2009 after Texas voters overwhelmingly approved a 2007 constitutional amendment committing $3 billion to the fight against cancer.