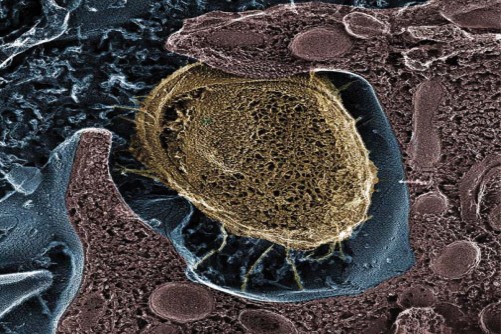 An E. coli bacterium (above, in gold) attaches to and invades cells lining the inner surface of the bladder. UTIs are among the most common infections, and they tend to recur. Researchers at Washington University School of Medicine in St. Louis have found a molecular decoy that reduces the number of UTI-causing gut bacteria. This compound potentially could lower the chance of repeat UTIs.

Newswise — Urinary tract infections (UTIs) are among the most common infections, and they tend to come back again and again, even when treated. Most UTIs are caused by E. coli that live in the gut and spread to the urinary tract.

“The ultimate goal of our research is to help patients manage and prevent the common problem of recurrent urinary tract infections while at the same time helping to address the worldwide crisis of antimicrobial resistance,” said Scott J. Hultgren, PhD, the Helen L. Stoever Professor of Molecular Microbiology and the study’s senior author. “This compound may provide a way to treat UTIs without the use of antibiotics.”

The study is published June 14 in Nature.

Close to 100 million people worldwide acquire UTIs each year, and despite antibiotic treatment, about a quarter develop another such infection within six months. UTIs cause painful, burning urination and the frequent urge to urinate. In serious cases, the infection can spread to the kidneys and then the bloodstream, where it can become life-threatening.

Most UTIs are caused by E. coli that live harmlessly in the gut. However, when shed in the feces, the bacteria can spread to the opening of the urinary tract and up to the bladder, where they can cause problems. Conventional wisdom holds that UTIs recur frequently because bacterial populations from the gut are continually re-seeding the urinary tract with disease-causing bacteria.

First, the researchers identified genes that E. coli need to survive in the gut. One set of genes coded for a kind of pilus, a hairlike appendage on the surface of E. coli that allows the bacteria to stick to tissues, like molecular velcro. Without this pilus, the bacteria fail to thrive in the gut.

Earlier studies found that the identified pilus attaches to a sugar called mannose that is found on the surface of the bladder. Grabbing hold of mannose receptors on the bladder with the pilus allows the bacteria to avoid being swept away when a person urinates. Bacteria that lack this pilus are unable to cause UTIs in mice.

Previously, Hultgren and co-author, James W. Janetka, PhD, an associate professor of biochemistry and molecular biophysics at Washington University, chemically modified mannose to create a group of molecules, called mannosides, that are similar to mannose but changed in a way that the bacteria latch onto them more tightly with their pili. Unlike mannose receptors, though, these mannosides are not attached to the bladder wall, so bacteria that take hold of mannosides instead of mannose receptors are flushed out with urine.

Since the researchers found that this same pilus also allows the bacteria to bind in the gut, they reasoned that mannoside treatment could reduce the number of E. coli in the gut and perhaps prevent the spread of the bacteria to the bladder.

To test this idea, they introduced a disease-causing strain of E. coli into the bladders and guts of mice to mirror the pattern seen in people. In women with UTIs, the same bacteria that cause problems in the bladder usually also are found living in the gut.

The researchers gave the mice three oral doses of mannoside, and then measured the numbers of bacteria in the bladders and guts of the mice after the last dose of mannoside. They found that the disease-causing bacteria had been almost entirely eliminated from the bladder and reduced a hundredfold in the gut, from 100 million per sample to 1 million.

“While we did not entirely eliminate this strain of bacteria from the gut, the results are still promising,” said Spaulding, the paper’s first author. “Reducing the number of disease-causing bacteria in the gut means there are fewer available to enter the urinary tract and cause a UTI.”

The type of pilus the researchers studied is found in most strains of E. coli and some related bacterial species as well. In theory, mannoside treatment could cause other bacteria living in the gut with the same kind of pilus to be swept away, much as antibiotic treatment kills bystander bacteria along with the intended target. Eliminating harmless bacteria potentially opens up space in the gut for more dangerous microbes to grow. This can result in intestinal disorders, one of the known risks of broad antibiotic treatment.

In collaboration with co-author Jeffrey I. Gordon, MD, the Dr. Robert J. Glaser Distinguished University Professor at the School of Medicine, researchers measured the composition of the gut microbiome after mannoside treatment. They found that mannoside treatment had minimal effect on intestinal bacteria other than the ones that cause most UTIs. This is in stark contrast to the massive changes in the abundance of many microbial species seen after treatment with antibiotics.

“This finding is exciting because we’ve developed a therapeutic that acts like a molecular scalpel,” Spaulding said. “It goes in and specifically cuts out the bacteria you want to get rid of, while leaving the remainder of the microbial community intact.”

Furthermore, since mannoside is not an antibiotic, it potentially could be used to treat UTIs caused by antibiotic-resistant strains of bacteria, a growing problem. UTIs account for 9 percent of all antibiotics prescribed every year in the United States, so a therapy for UTI that avoids antibiotics could help curb the development and spread of antibiotic-resistant organisms.

Differences in anatomy and behavior between mice and women make mice a challenging model for testing whether reducing the bacterial load in the gut actually reduces the number of repeat UTIs. To answer that question, human studies are needed.

Hultgren has co-founded a company, Fimbrion Therapeutics, with Janetka and Thomas ‘Mac’ Hooton, MD, of the University of Miami School of Medicine, to develop mannosides and other drugs as potential therapies for UTI. Fimbrion is working on identifying a promising candidate drug for clinical trials in humans.