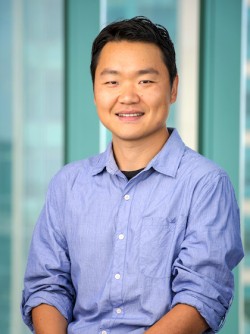 The research could someday lead to a test to predict an individual patient’s response to a particular drug in the class of cancer therapies called PARP1 inhibitors, they said.

The signatures, which he compared to bar codes at the grocery store, reveal how proteins from breast cancer subtypes are modified differently by the enzyme PARP1, which stands for poly (ADP-ribose) polymerase 1. This enzyme is critical to the cancer cell’s DNA repair response to chemotherapy that damages DNA, the cell’s genetic material, he added.

PARP1 is the major target for PARP1 inhibitor drugs, the first three of which were recently approved by the Food and Drug Administration to treat ovarian cancer. PARP1 inhibitors are being evaluated against other types of cancer in clinical studies at UT Southwestern and at dozens of other medical centers around the world, said Dr. Yu, a Virginia Murchison Linthicum Scholar in Medical Research. The drugs target cancer cells by blocking the function of PARP1 and crippling DNA repair. Although DNA damage is recognized as a potent activator of the PARP1 response, the cell-signaling cascades that follow PARP1 activation are poorly understood in other contexts, he said.

“I stress that this research is still in its early stages,” he said. “We think these results could have profound clinical implications. Our ultimate goal is to develop a signature, or fingerprint, for the changes in cellular proteins in response to the enzyme PARP1. A test based on a PARP1 signature could someday help doctors predict a particular patient’s response to a specific PARP1 inhibitor,” he said.

That would be a step toward the era of personalized medicine, he added.

At any given time, human cells contain about 12,000 proteins that work through signaling pathways to carry out the work of the cell, such as metabolism and the cell’s response to stress. The highly sensitive mass spectrometry system developed by Dr. Yu and his colleagues and first described in a 2013 Nature Methods article can pick out 200 or so modified, or tagged, proteins that form the PARP1 response signature. He compared his system to a shopper buying a watermelon at a grocery store where a bar code scanner is used to identify the particular type of melon being purchased.

In reference to the cancerous and noncancerous cells studied here, the chemical tag (or bar code) takes the form of a cluster of atoms that have a distinctive weight that can be measured with a sensitive mass spectrometer. Because chemical tags are part of the cancer cell’s efforts to set off signaling pathways to repair DNA, a better understanding of those pathways could result in new treatment targets, Dr. Yu explained.

The UT Southwestern researchers found significant differences between the signatures of noncancerous breast tissue cells that contained working copies of the tumor-suppressing BRCA1 and BRCA2 genes and breast cancer cells that lacked working BRCA1 and BRCA2 genes. Mutations in those two genes are thought to account for an estimated 10 percent of all breast cancer cases, they said.

“A major hypothesis within the field is that tumors that lack working BRCA genes tend to be more sensitive to PARP1 inhibitors because they are more dependent on PARP1 for DNA damage repair compared to noncancerous cells,” Dr. Yu said.

In a 2016 Science article, Dr. Yu and his colleagues used the same technology to study three members of the PARP enzyme family. That study – led by Dr. W. Lee Kraus, Director of the Cecil H. and Ida Green Center for Reproductive Biology Sciences – found that in addition to the DNA repair response, PARPs play key roles in several fundamental cellular processes that could lead to new drug targets, Dr. Yu said.

“Our current study builds on those findings with data indicating that PARP1 changes proteins in a cell-specific manner that includes modifications of proteins involved in transcription, messenger RNA metabolism, and protein translation, all of which are linked to the pathogenesis of human cancer,” he said.

Co-authors include lead author Dr. Yuanli Zhen and Dr. Yajie Zhang, both postdoctoral researchers in Biochemistry. Dr. Kraus, a Professor of Obstetrics and Gynecology and of Pharmacology, holds the Cecil H. and Ida Green Distinguished Chair in Reproductive Biology Sciences.

The study received funding from The Welch Foundation and the National Institutes of Health.

This news release is available on our website at http://www.utsouthwestern.edu/newsroom/