26-Jun-2018 11:05 AM EDT, by University of Virginia Darden School of Business
favorite_border

PagSeguro Digital likes to use the word “democratize” to describe its mission. The Brazilian payment-processing company was founded in 2006 to give more small vendors access to the world’s eighth-largest economy by letting them conduct transactions electronically. “We have every type of merchant: coffee shops, personal trainers, doctors, dentists, taxi drivers,” says University of Virginia Darden School of Business alumnus Ricardo Dutra da Silva (MBA ’07), CEO of PagSeguro since 2016.

The merchants may be small, but PagSeguro is having a huge effect on the ways that everyday Brazilians do business.

The company was conceived as a kind of Brazilian PayPal. It offers a free digital account through which users can send and receive money, and also sells point-of-service devices for merchants to process credit card transactions using a smartphone or using autonomous POS. Just like there was no PayPal before PayPal, there was nothing on the scene in Brazil to fill the particular niche that PagSeguro created for itself — and it’s still reaping the rewards for being first. Last year over 2.8 million merchants used the company’s payment options: “It’s 100 percent online,” Dutra da Silva says — no salespeople. “It’s very disruptive.”

Once an upstart, PagSeguro has grown into a powerful force that’s given the traditional Brazilian fintech industry a run for its money. In an initial public offering in January 2018 — the biggest IPO by a Brazilian company since 2011 — PagSeguro Digital (PAGS) raised $2.3 billion on the New York Stock Exchange, according to Bloomberg. With lead underwriting from Goldman Sachs and Morgan Stanley, it was also the biggest IPO on the NYSE since the March 2017 debut of Snap, the company that produces Snapchat.

Was he surprised by the success? A little bit, Dutra da Silva says: “We planned and worked hard to create an awesome and unique company, and the recognition we got from the market reinforced we are in the right way. And that is  great.”

He continues, “We’re the vanguard — we really created this new market. We’re not competing with incumbents.”

Dutra da Silva says he chose the Darden School in 2005 because he believed in the high quality of business and business school in the U.S. At 28 years old, the Sao Paulo native already had some business experience under his belt, having worked since 1997 for UOL, the Brazilian online-content firm that’s now PagSeguro’s parent company. He wanted to broaden his business horizons before settling down in Brazil to start a family, and he knew the U.S. was where to go: “The best place to study business,” he says. “America knows how to do it.”

If he chose America because it was the center of the action, Dutra da Silva selected Darden because of its small class size and case-based learning system — and because he loves Charlottesville. Directly following his graduation from Darden, Dutra da Silva worked in consulting at Bain & Co. in the Sao Paulo office, but ultimately ended up back at his former employer, UOL.

Dutra da Silva, who is also CEO of UOL Digital Content and Products, says UOL created PagSeguro in 2006 to meet a need nobody else was tackling as PayPal was quickly growing in the U.S.

PagSeguro continues to benefit from the trail it blazed. When the company debuted on the NYSE earlier this year, a financial analyst from KeyBanc Capital Markets said PagSeguro “holds a strong position in Brazil’s digital payment space,” according to the finance website Benzinga, taking advantage of “a $400 billion market that’s less than 30 percent penetrated.” Brazil’s small merchants remain “significantly underserved,” the analyst said — pointing the way for future growth.

Darden, he says, “was crucial for my success in my career and the success of the IPO. You have 300, 400 meetings with investors. It was the confidence Darden gave me to talk to all these investors and understand the big picture.” 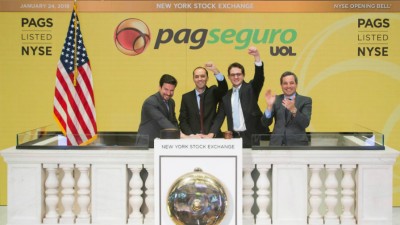 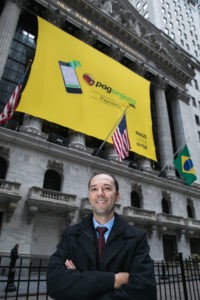