16-Jun-2017 10:05 AM EDT, by University of Virginia Darden School of Business
favorite_border 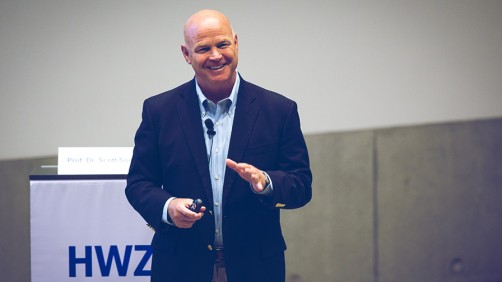 The Darden-HWZ conference featured experts from both schools discussing new technology and its impact on culture, teams and corporate strategy, among other topics.

Newswise — As new technologies continue to dramatically alter companies and the workplace at remarkable speed, predicting even the near-term future of many businesses can be a tall task.

Opening the Leadership in the Face of New Technology conference in Zurich, Switzerland, HWZ University of Applied Sciences in Business Administration Zurich President Peter Petrin said that while it was understandable to be uncertain of what the future would bring, failure to grapple with the question represented an abdication of leadership.

“Many don’t know what is going to happen,” Petrin said. “That is not a shame, but it would be a shame if you did not deal with the new technologies and their potential.”

The conference, the second co-hosted with Darden as part of a nearly decade-long collaboration, featured experts from both schools discussing new technology and its impact on culture, teams and corporate strategy, among other topics.

With the explosion of Big Data as a backdrop, Darden Professor Raj Venkatesan shared his research on how companies could best harness the reams of data now at their fingertips in order to gain a sustainable advantage over the competition — an opportunity few companies are exploiting.

According to research conducted by Venkatesan and Darden Professor Kimberly Whitler, corporate leaders have a desire to use data, but are often stymied by the obstacles, which Venkatesan breaks down into (1) the complacency of cognitive inertia, (2) the unwillingness to invest resources into an arena with uncertain outcomes, and (3) the complexity of the problems at hand.

Venkatesan cited a number of companies that have successfully tapped into the potential, including Netflix, Nationwide, CarMax and Airbnb, among others, and described the manners in which they had baked effective data use into the decision-making processes throughout their companies.

Darden Professor and Global Chief Diversity Officer Melissa C. Thomas-Hunt led a discussion on some of the challenges, both familiar and novel, that can emerge when attempting to leverage teamwork in the era of Big Data.

Noting that Big Data may not be the cure-all that some suggest, Thomas-Hunt said the field of data science was nevertheless being widely embraced due to tangible effects such as decreasing expenses, adding new revenue and launching new products.

All of which makes the data scientist — the person existing at the center of the overlap of domain expertise, computer science and math — an in-demand employee. Such an employee is further suited to their position if they feature attributes such as curiosity, cleverness and storytelling ability.

The only problem with such a person? They may not actually exist.

“That person can actually be quite rare — that’s a lot for that one individual,” Thomas-Hunt said. “The conceptualization of the data scientist as the lone person that’s doing all of those things is much like the mythical unicorn.”

Instead, the data science function at an organization is likely accomplished by a team of individuals with complementary talents. And while ideal in conception, such teams can fall victims to some familiar patterns and pitfalls, with hierarchies emerging and the expertise of some members going unrecognized as others dominate.

It may fall to the leader of an organization to recognize and combat such potentially counterproductive behavior.

“Leaders have to step in,” Thomas-Hunt said.  “To the degree that you are in roles where you are even nominally the leader, there is a curatorial role for you.”

Data holds endless potential, Thomas-Hunt said, but data alone can do nothing without a team of people able to effectively harness its uses.

Darden Professor Scott Snell noted a similar dynamic in his discussion on executing strategy, which remains one of the most vexing challenges for corporate leaders.

According to Snell’s research, executional excellence is the top problem faced by CEOs, with many unsure of how to even approach the issue, given the complexity.

Snell’s research suggests that the capability to execute relies on some combination of culture, organizational design and process management, among other factors.

“Being good at one will not make you good at another, and if you are not good at all of them at some level, you’re not going to be able to execute,” Snell said.

Snell has further honed his model of execution capability into what he described as the 4A Model, a model composed of alignment, activation, ability and architecture, a related and interconnected combination of human and organizational capability.

Snell cited examples from companies such as UPS, Microsoft and Marriott, which are all taking steps to execute strategy as they plan for the future.

Forward-thinking companies recognize that execution is an “unending process,” Snell said, noting that the approach to execution inevitably evolves as a company executes.

Noting the agility with which companies must operate in order to execute with optimal effectiveness, Snell described execution strategy “about managing change as much as about innovation.”

In addition to the Darden faculty, HWZ faculty members led sessions as well, with Professor Claude Meier delivering a case study on digital leadership. Executives from companies including Evernote and Accenture also addressed the conference.

In 2015, Darden and HWZ collaborated to host the Big Data: Little Ethics? conference.