8-Nov-2017 11:05 AM EST, by University of Virginia Darden School of Business
favorite_border 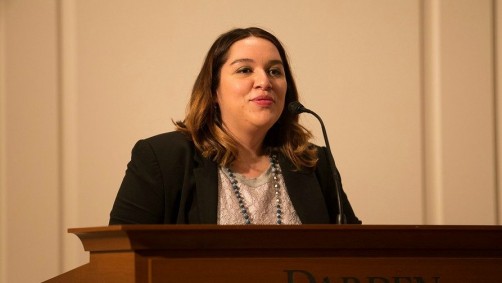 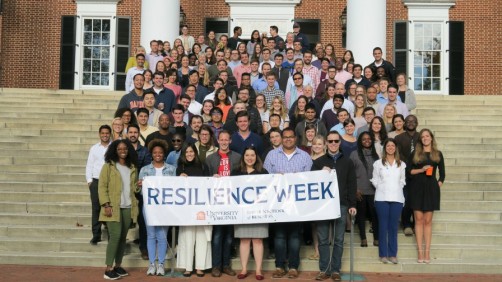 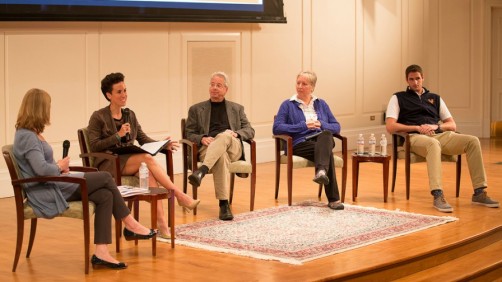 Catherine Aranda (Class of 2018) said she spent much of her First Year at the University of Virginia Darden School of Business feeling like an imposter, a West Coast transplant with a nonprofit background who maybe just wasn’t cut out for business school.

Learning what felt like multiple new languages while struggling to find her voice in the classroom, Aranda says she often felt defeated. With an assist from UVA Counseling and Psychological Services (CAPS), a deep well of personal resolve and a lot of hard work, Aranda eventually found her footing and began to excel in and outside of the classroom.

Aranda subsequently threw herself into a new mission, working to bring mental health and wellness issues into the sunlight to both remove their associated stigmas and build a stronger Darden community.

The work of Aranda and a new Darden Student Association (DSA) executive committee on mental health and wellness formally culminated on 23 October with the kickoff of Darden’s first Resilience Week. Four days of programming featured over 20 events, with sessions led by students, faculty and staff on topics ranging from lessons on maximizing individual performance to strategies to cope with trauma and adversity.

While the topics are broad and varied, Aranda said organizers wanted to be sure to explain the business case for resilience, calling the ability to adequately deal with adversity a key trait for future leaders.

“If you can’t manage yourself first, what kind of leader are we making of you?” Aranda said. “If we are successful, Darden graduates will re-enter society with a tool kit that better enables them to practice self-care, maximizing their performance and impact as a business leader.”

Resilience Week is one component of the new Darden Mental Health and Wellness Initiative, a student-driven effort to establish an institution-wide foundation for helping members of the community become more resilient leaders. Aranda pitched the initiative to Darden’s Office of Student Affairs in April 2017 at the same time the office was making the decision to expand its 2016-2017 [email protected] pilot, which included the addition of clinical psychologist Deborah Wilson to the Darden staff.

Speaking at the First Coffee Resilience Week kickoff event, Assistant Dean of Student Affairs Sarah Elliott said Darden had long seen a need for greater in-house wellness services. When she heard there was a then-First Year student eager to help expand its efforts, Elliott said she “knew it was one of those fortuitous moments when all of the right pieces were coming together.”

At one Resilience Week session titled The Business Case for Resilience, a panel of Darden community members described the relationship between personal wellness and organizational health, noting, for instance, the contagious and often destructive nature of negative thoughts.

Professor Lili Powell recounted her own experience coming to terms with grief, an effort assisted by mindfulness-based stress reduction.

Seeing the strength of the technique, Powell began bringing mindfulness into her courses and teaches a leadership-presence course that incorporates aspects of the approach.

“You cannot manage other people unless you manage yourself first,” Powell said, quoting the management guru Peter Drucker. “As leaders, you will want employee retention, employee engagement, innovation and mental agility. All of that can be aided with mindfulness, compassion and resilience.”

Professor Marc Lipson said the sorts of attributes companies recruit for — innovation, risk tolerance, the ability to experiment and be bold — are all directly related to resilience, as all presuppose a willingness to be wrong, or to fail.

As more and more jobs are automated, positions of the future will be those directly related to a capacity for emotional and mental resilience, Lipson said.

Margaret Weeks, associate director of career education and advising at the Darden Career Development Center, called resilience “the number one thing you need to have in MBA recruiting,” and said students who are open to multiple options often have the most positive experience finding jobs. Students who approach the job search locked in on particular position often set themselves up for disappointment, Weeks said.

Professor Lalin Anik encouraged attendees to consider a more expansive view of resilience. While the concept of reacting to, or standing against, adversity was important, Anik challenged the audience to consider resilience as an everyday approach entwined with “just being.”

Using an analogy of how potatoes, eggs and coffee react differently to boiling water, Anik said that while the three items all face the same adversity, each react differently, with the egg turning hard on the inside, the potato turning soft and the coffee embracing the boiling water to release its essence. Success, at Darden or in life, often comes to those who were most like coffee, Anik suggested.

First Year student Dan Friedman (Class of 2019) described his experience with resilience, recounting his story of losing his father in the terrorist attacks of 11 September, the community that rallied around him and his family, and his path to Darden.

“You can use what has happened to you to inspire others that it will turn out okay,” said Friedman, who in September launched a sock startup that donates a portion of its proceeds to a charity benefiting communities affected by terrorism and traumatic loss. “If you own the message, you don’t give others an opportunity to feel sorry for you. You display your own resilience and you display your own ability to thrive.”

Aranda said she hopes the topics and themes brought out during Resilience Week were part of the beginning of a “lifelong conversation,” and cited a number of ways organizers hoped to keep momentum going at the School, including the exploration of a resilience fund that could support future programming and be “used during times of disruption.”

Overall, Aranda said she hoped Darden students and community members came away from the week with a greater sense of the importance of resilience in business and life.

“Every effective business leader is a manager of change,” Aranda said. “Resilience is about your ability to cope with change.” 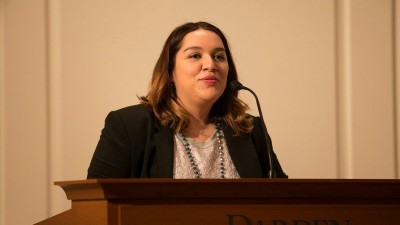 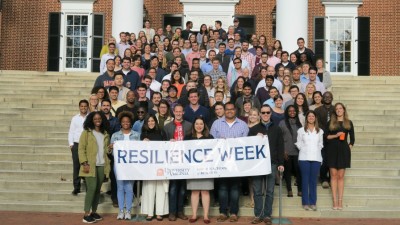 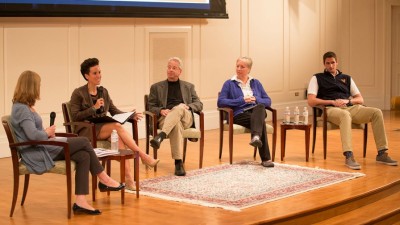