8-Aug-2018 11:05 AM EDT, by University of Virginia Darden School of Business
favorite_border 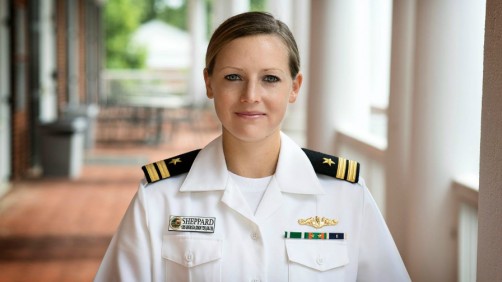 U.S. Navy Lt. Taylor Sheppard is fitting an MBA and training for a Hawaiian ocean swim into her “shore leave” from submarine duty.

Newswise — In 2011, the U.S Navy announced that female sailors could serve on submarines, putting another crack in the military’s glass ceiling. Taylor Sheppard, then an undergraduate student at the University of Notre Dame and a Navy ROTC cadet, jumped on board.

Immediately after graduation, the Maui, Hawaii native joined the ranks of female submariners, serving first as a nuclear engineer and then a weapons division officer.

It’s been six years now, and Sheppard, now a lieutenant, is still loving it. She remains on active duty even as a second-year student at the University of Virginia Darden School of Business, where the two-year curriculum fit nicely with her two-year “shore tour” assignment. Between classes, she frequently checks in with UVA’s Navy ROTC unit — her current assigned unit — and she will return to submarine tours after school.

Even off duty, Sheppard can’t stay away from the water. She’s also a swimmer; she swam competitively at Notre Dame, and recently completed a 13-mile race around Key West, her longest open-water competition to date. She finished second overall, with a time of 5 hours, 12 minutes and 17 seconds.

Next month, Sheppard will swim between Lanai and Maui — a windy, choppy 10-mile stretch — and in a few years, she hopes to tackle the English Channel.

“That’s really a matter of timing right now,” she said of the 21-mile Channel swim. “You have to reserve it pretty far in advance, and there is a lot of cold water training that goes into it.”

In her spare time — yes, she does have some — Sheppard is one of the leaders of Darden’s Outdoors Club, planning camping, hiking and rafting trips and other excursions for her classmates (as shown in the video below). Right now, she’s in the midst of planning a camping trip to introduce newly arrived first-year students to some of her favorite spots.All in all, it’s safe to say that she loves the outdoors. In fact, she might now love the Blue Ridge Mountains just as much as she loves the ocean.

“Honestly, I could go on and on about Darden, UVA and Charlottesville,” Sheppard said, sitting outside a favorite local coffee shop, Shenandoah Joe. “For me, it was such a hidden gem. I had no idea Charlottesville was so great, but when I visited, I completely fell in love with UVA, the city and the surrounding area.”

Sheppard also loved Darden’s focus on the case method, though she admits that she was intimidated by the teaching style at first. Case-method classes at Darden replace traditional lectures with intense discussions of a business case presenting difficult dilemmas or decisions. Sitting at the back of class and not talking is not exactly an option.

“The case method terrified me, honestly,” she said. “But I knew it would put me out of my comfort zone every day, and I thought that would be much more developmental for me in the long run.”

Case-based classes also tend to create a collegial, team-focused environment, as students work together in small learning teams to analyze each case and prepare for class.

“When I visited Darden, I loved seeing how the students supported each other,” Sheppard said. “I remember leaving and thinking that I wanted to be friends with every single person I had met.”

She speculates that collaborative atmosphere has a lot to do with Darden’s appeal to military veterans.

“It’s a smaller school with a tight-knit community, and that is something military veterans are very familiar with,” she said. “We also love working with people, and Darden’s structure, where you are put on learning teams early on, really emphasizes that.”

As much as she enjoys her classmates, Sheppard misses seeing her submarine crewmates every day. After all, they were together for four- or five-month stretches during their submarine missions, mostly in the Indian Ocean and the Mediterranean, and nearly always in pretty tight quarters.

“The people were the best part of it all. … Every time I have been involved in a submarine crew, from seeing them on naval bases growing up to my own experience, the crews have continually impressed me. They are so tight-knit and so good at their jobs,” she said. Joining a submarine crew was “the best decision I ever made.”

During her first tour of duty, Sheppard served as her submarine’s nuclear engineer, having just completed two years of nuclear engineering training in Charleston, South Carolina. Her team was responsible for supervising the nuclear reactor that powered the submarine, as well as monitoring radiation on board.

On subsequent tours, she served as a weapons division officer, supervising the technicians who worked on the submarine’s torpedoes, and as the “officer of the deck,” leading navigation and coordination with the captain and the chain of command on shore.

At Darden, Sheppard has been building on her technical skills as an engineer and her experiences managing teams of sailors.

“I was a math major in college, and I have engineering experience and management experience in the military, but I was missing exposure to the business world,” she said.

This summer, she is wrapping up an internship with the finance division of Apex Clean Energy, a Charlottesville-based firm that focuses on wind energy.

“It’s been a great summer,” she said. “The people are great, the work they do is so interesting and the company is so innovative. I’ve loved seeing how they do business.”

After graduation, Sheppard plans to serve out her remaining three years in the military before transitioning to the private sector to work in the energy industry.

“I really like the energy sector and I really like finance, so I hope I can find a role that combines those two things,” she said. “I think the energy industry will be completely different in four years as the shift to renewable energy continues, so it’s hard to say exactly what that career will look like. But I think I would like to go down that road.”