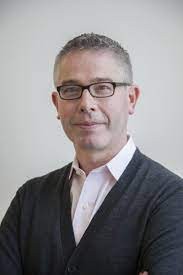 UW-Milwaukee astrophysicist Patrick Brady was just elected to a two-year term as spokesperson of the LIGO Scientific Collaboration. He is the sixth scientist to hold the position.

The announcement came the same day that the LIGO facilities resumed operations after an 18-month hiatus during which they were upgraded.

The spokesperson of the LIGO Scientific Collaboration (LSC) speaks on behalf of the 1,300 scientists in 20 countries who are engaged in gravitational wave research with data from observatories located in Hanford, Washington, and Livingston, Louisiana.

Brady, a UWM professor of physics and director of the Leonard E. Parker Center for Gravitation, Cosmology and Astrophysics, is sixth in an elite group of scientists who have served as LSC spokespersons since the LSC formed in the late 1990s. Former spokespersons were Nobel Prize winner Rainer Weiss (Massachusetts Institute of Technology), Peter Saulson (Syracuse University), Dave Reitze (Caltech), Gabriela Gonzalez (Louisiana State University) and David Shoemaker (MIT).

LIGO’s twin detectors return to their hunt for gravitational waves — ripples in space and time caused by violent cosmic events — after improvements that increase their sensitivity by 40 percent over its last run. This means the detectors can now see farther into space than beforefor powerful, wave-making events, such as the collisions of black holes.

Joining the search will be Virgo, the European-based gravitational-wave detector, located at the European Gravitational Observatory (EGO) in Italy, which has almost doubled its sensitivity since its last run and also started up April 1.

Improvements to the detectors have historically made a difference to furthering discovery. In 2015, after LIGO began observing for the first time in an upgraded program called Advanced LIGO, it soon made the first direct detection of gravitational waves.

The ripples traveled to Earth from a pair of colliding black holes located 1.3 billion light-years away. UWM contributed to the detection with data processing systems built and maintained by UWM physicists and global collaborators, some of whom are former UWM students.

Since then, the LIGO-Virgo detector network has uncovered nine additional black hole mergers and one explosive smashup of two neutron stars. That event, dubbed GW170817, generated not just gravitational waves but light, which was observed by dozens of telescopes in space and on the ground.

With the start of the next joint LIGO-Virgo run, said Brady, the observatories are poised to detect an even greater number of black hole mergers and other extreme events, such as additional binary neutron star mergers, which is thought to be the producer and distributor of heavy metals, such as precious metals, throughout the galaxy.

“Gravitational wave astronomy has given scientists a new way to view the universe and collect data previously inaccessible through conventional telescopes,” Brady said. “It’s an important step in our quest for multi-messenger astronomy, which is the observation of celestial events across multiple mediums, including visible light, radio waves, X-rays, cosmic rays and neutrinos.”

Brady’s research focuses on the analysis and interpretation of data from the network of gravitational-wave detectors. He served on the executive committee of the LSC from 2004-2006, and has co-chaired the LSC Inspiral Analysis Group and chaired the LSC Data Analysis Software Working Group. He joined the UWM faculty in 1999, after a fellowship at Caltech. In 2010 he was elected a Fellow of the American Physical Society, and he shared in the 2016 Special Breakthrough Prize.