Brenda Cárdenas , an associate professor of English, has been honored for her poetry 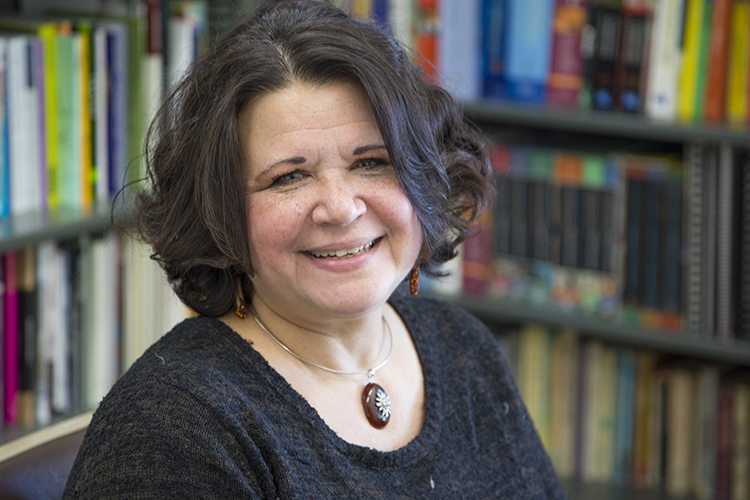 Brenda Cárdenas' poetry is "interlingual," with elements of Spanish and English.

Newswise — Brenda Cárdenas was excited and grateful to be named a 2018 Outstanding Woman of Color for the University of Wisconsin-Milwaukee this fall by the UW System.

“I think the award has to do with serving the community at UWM and the larger community as well. That’s always been important to me,” she said. “I have also spent my career in my own work as a poet focusing, not exclusively, but quite a bit, on my identity as a Mexican-American or Chicanx identity, culture, history and art.”

Cárdenas, an associate professor of English, also values the writer’s less tangible rewards, ones that come through having others share and relate to her words. Much of her poetry is what she calls “interlingual,” combining the English and Spanish languages to create something new.

That poem about monarch butterflies migrating between countries and cultures reflects her feelings of being a woman in the space between – being both Mexican and American, said Cárdenas.

“That to me was more important than an award I could have won,” Cárdenas said. “She was this young person in Alaska that I connected to through this poem. For me that was one of my favorite achievements.”

Cárdenas, who was Milwaukee’s poet laureate from 2010-2012, grew up in Milwaukee in a Mexican-American family where storytelling was part of daily life. Her grandparents loved sharing stories with the children, both fairytales and memories of their Mexican homeland. Her father’s sister, her aunt Elia, made and bound little blank books out of scrap paper where Cárdenas could write her own stories and make drawings to go with them. “She was my Mexican Mary Poppins.”

Cárdenas’ focus on poetry as the form she wanted to use in her own writings developed in high school as she discovered the works of Gwendolyn Brooks, Langston Hughes, Walt Whitman and others. After starting study in journalism at UW-Eau Claire, she came to UWM as a first generation student, earning her bachelor’s in English. She went on to earn her master’s in creative writing-poetry at the University of Michigan, where she delved into the work of Latin American and U.S. Latinx novelists and poets.

After teaching and working in Chicago for seven years, she returned to Milwaukee, first to MATC and then to UWM. In addition to teaching creative writing and U.S.-Latinx literary studies, she is the author of several volumes of poetry and chapbooks, editor of other poetry anthologies and has contributed to numerous poetry journals and anthologies. In 2014, the Library of Congress recorded a reading of her work for its Spotlight on U.S. Hispanic Writers.

Language as a musical instrument

One critic for the Midwest Book Review wrote of her poetry:

“Language is a musical instrument, and for Brenda Cárdenas, blending musical instruments makes for better music. ‘Boomerang’ is a collection of poetry from Cárdenas emphasizing her unique style of blending English and Spanish to create a truly unique style that those who can appreciate both languages’ better qualities will certainly enjoy.”

The movement toward and support of such interlingual poetry was spotlighted when Juan Felipe Herrera was named the first Latinx poet laureate of the United States in 2015, Cárdenas said.

She worked with a colleague and sponsors to bring Herrera to UWM in 2016. “That was one of my very favorite things I’ve been able to do here.”

Living in Milwaukee again has brought her more fully into her family circle and into a busy life that includes sharing poetry with the community, teaching and writing.

She recently did a poetry reading at the Folger Shakespeare Library in Washington, D.C., that focused on eco-justice poetry. One of her poems that regards both culture and eco-justice was part of an anthology. She also organized a panel at UWM of Milwaukee of creative writers in nonprofit careers to inform students about such a career path. In January, was on a panel of Chicago Latinx writers at the MLA (Modern Language Association) conference.

Currently, her own work has focused on poems inspired by Latinx artists. “One of the series I’m working on is based on drawings by Eric de Luna, who did a series of Lotería cards.” His version is called “100 Names for Death,” featuring different depictions of skeletons. One set of pictures featured women carrying heavy loads of various kinds, including a stack of bird cages and a child. “The poem ended up being about the artwork, but also about the separation of families at the border and the caging of children.”