Students in the UW-Milwaukee App Brewery worked with a neuropsychologist at the Medical College of Wisconsin to develop an app used for awake brain surgery. MCW doctors have used NeuroMapper in dozens of surgeries already and now top-tier hospitals across the country are testing it. 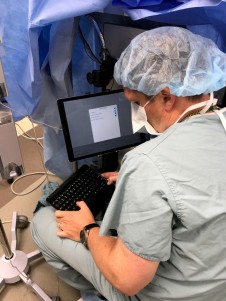 Newswise — MILWAUKEE _ A new app developed by the University of Wisconsin-Milwaukee and the Medical College of Wisconsin helps doctors make better decisions during brain surgeries.

The app, developed through a collaboration between students in the UWM’s App Brewery and a neuropsychologist at MCW, maps and monitors critical brain functions during surgeries in which patients are awake.

Called NeuroMapper, the tablet-based tool aids surgeons who are removing a tumor or tissue by helping them test whether they are encroaching on tissue that would impair critical functions if removed.

“Tumors can sometimes involve or be near important brain areas that control movement, vision and cognition, or our thinking abilities,” said Dr. David Sabsevitz, the neuropsychologist and MCW associate professor who developed NeuroMapper with the App Brewery.

In only a few months, NeuroMapper has been tested in more than 30 MCW surgical cases, and it’s being tested in major academic medical centers across the country.

The app delivers cognitive and sensory stimuli to patients and evaluates their responses. It uses a sophisticated platform in which two tablets communicate while capturing and tracking sensitive behavioral metrics in real time. Previously, doctors relied on much more basic information-gathering methods, such as talking to patients or showing them flashcards.

The app is attracting a lot of attention not only for its usefulness in surgery, but also for its potential in medical research outside the operating room. Sabsevitz is in the process of forming a consortium focused on that research use.

NeuroMapper is the latest tool produced through a four-year partnership involving the App Brewery and Froedtert & The Medical College of Wisconsin. UWM students in computer science, information studies and graphic design gain experience by developing new medical solutions using basic programming. MCW faculty get a glimpse into what is possible with mobile applications and how they are made.

“The impact of this innovative partnership is multifaceted,” UWM Chancellor Mark Mone said. “We provide hands-on experiences to our undergraduate students. Brain tumor patients receive a new level of personalized care. And, the region benefits from the collaborative, entrepreneurial work that generates products like NeuroMapper.”

Building the latest app was the most challenging job yet for Brewery developers, said Dustin Hahn, Brewery project manager. “As far as I know, no one has done this kind of app before,” Hahn said. “It took nine months to construct and evaluate it.”

By comparison, he said, the average Brewery project is completed in a month.

For NeuroMapper, UWM computer science graduate student Chase Lettney designed some of the app’s more complex functions, such as measuring a patient’s vocal responses and the timing of those responses. He was well underway with the assignment before he fully realized its potential impact.

“The magnitude of what we were creating didn’t really occur to me until after the doctors first tried it,” Lettney said. “I learned more about brain surgery in building this app than I ever knew before. It was an incredible experience.”

Recognized as one of the nation’s 115 top research universities, UW-Milwaukee provides a world-class education to 26,000 students from 89 countries on a budget of $667 million. Its 14 schools and colleges include Wisconsin’s only schools of architecture, freshwater sciences and public health, and it is a leading educator of nurses and teachers. UW-Milwaukee partners with leading companies to conduct joint research, offer student internships and serve as an economic engine for southeastern Wisconsin. The Princeton Review named UW-Milwaukee a 2018 “Best Midwestern” university based on overall academic excellence and student reviews, and the Sierra Club has recognized it as Wisconsin’s leading sustainable university.

About the Medical College of Wisconsin

Founded in 1893, The Medical College of Wisconsin is dedicated to leadership and excellence in education, patient care, research and community engagement.  More than 1,200 students enrolled in MCW's medical school and graduate school programs in Milwaukee, 56 medical students enrolled at MCW-Green Bay, and 26 students matriculated to MCW-Central Wisconsin in 2016. MCW's School of Pharmacy matriculated the inaugural class in 2017. A major national research center, MCW is the largest research institution in the Milwaukee metro area and second largest in Wisconsin. In FY2015, faculty received more than $158 million in external support for research, teaching, training and related purposes. This total includes highly competitive research and training awards from the National Institutes of Health (NIH). Annually, MCW faculty direct or collaborate on more than 3,200 research studies, including clinical trials. Additionally, more than 1,500 physicians provide care in virtually every specialty of medicine for more than 525,000 patients annually.