Two Wisconsin companies started up to move production from overseas 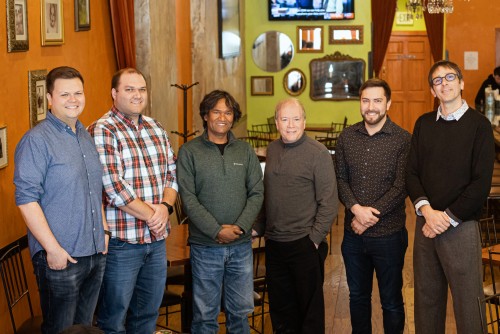 Professor Mark Dietz and alumni of his lab got together recently for lunch. Left to right are: Kevin Wolters, James Wankowski, Mohammed Abdul Momen, Dietz, Michael Kaul and Cory Hawkins. All trained at UWM in the highly specialized work of separations involving nuclear material, a critical skill for Wisconsin companies.

Newswise — A UW-Milwaukee chemistry professor and graduates of his lab are helping move production of a vital medical material – once produced only by foreign sources – to the United States.

The material is molybdenum-99, the parent of technetium-99m, the most widely used radioisotope in the world for diagnostic medical imaging, according to UWM Chemistry Professor Mark Dietz. (The materials are often abbreviated as Mo-99 and Tc-99m.)

About 10 years ago, after repeated disruption to supplies of Mo-99 from abroad, the Department of Energy began to encourage the development of new approaches to the production of this critical radioisotope in the U.S.

However, the companies needed chemists who were skilled in separations involving radioactive materials. Over the last four years, five graduates of Dietz’s research group, all trained in this highly specialized work, have been hired by these two companies, one on a temporary basis and four others permanently – two by each company.

“UWM and its graduates have contributed to Wisconsin employers’ ability to solve an issue of national importance,” Dietz said.

The medical isotope derived from Mo-99 is the workhorse of nuclear medicine. It is used in more than 40 million medical imaging procedures each year for heart patients and cancer diagnosis.

Cory Hawkins is a UWM alum who now works for the therapeutics division at SHINE Technologies. Hawkins’ division is focused on production of lutetium-177 for cancer-targeted radiotherapy.

“It makes me feel good that we are developing diagnostics and therapeutics that can help the critically ill and that we can also fill in a supply gap,” Hawkins said.

SHINE has a four-phase vision to build a profitable business and ultimately bring nuclear fusion power to market, he added. The current phase 2 involves radiopharmaceutical production.

Mohammed Abdul Momen, another UWM grad who also works for SHINE, came into the field because he was interested in environmental issues and the safe handling of nuclear materials.

James Wankowski, who earned his doctorate in 2017, works at NorthStar Medical Radioisotopes. NorthStar has a focus on developing and creating products in an environmentally sound way, and that’s an important part of Wankowski’s work.

“My project is essentially taking this critical and expensive raw material and helping us re-use it to benefit our customers and the patients they serve.”

Kevin Wolters, who completed his doctorate at UWM in December 2021, worked in Dietz’s lab and took a long-term temporary position with SHINE Technologies for two and a half years with his professor’s recommendation.

He eventually took a position at Sterling Pharma Solutions in Germantown that involves helping develop drugs. He completed his doctoral degree on weekends while working there.

Michael Kaul was exposed to the research as an undergraduate at UWM. He went on to pursue a doctorate in the field and landed a job at NorthStar Medical Radioisotopes as a process chemist.

James Harvey, chief science officer of NorthStar Medical Radioisotopes, got to know Dietz earlier in both of their careers and has stayed in touch as his firm looks to recruit researchers for its cutting-edge work.

“We’re very impressed with the graduates who have come out of Dr. Dietz’s lab,” he said.

“They have the skill sets we need in advancing radio imaging manufacturing. They’re well-rounded and hit the ground running.”