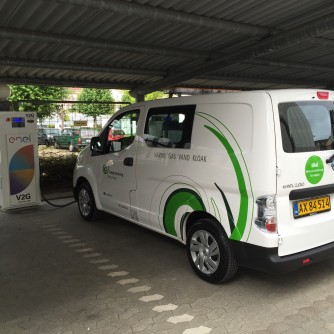 University of Delaware’s platform for integrating vehicle-to-grid (V2G) technology is now operating in Denmark, creating a new V2G hub outside the United States that is poised to expand widely with commercial products. Ten electric cars and ten V2G charging stations are now providing commercial V2G services in the city of Frederiksberg. 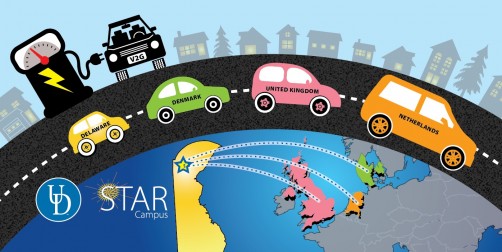 Infographic by Tammy Beeson
Previous Next

Newswise — The University of Delaware’s platform for integrating vehicle-to-grid (V2G) technology is now operating in Denmark, creating a new V2G hub outside the United States that is poised to expand widely with commercial products.

Ten electric cars and ten V2G charging stations are now providing commercial V2G services in Frederiksberg, according to Willett Kempton, professor in the School of Marine Science and Policy in UD’s College of Earth, Ocean, and Environment and research director of the University’s Center for Carbon-Free Power Integration.

The project is a collaborative effort between Nuvve, who is licensing UD-developed technology, Nissan, Enel, Danish Technical University, and the Danish Grid Operator, Energinet.dk.

To deploy renewable energy at large scale, low-cost storage is needed. Instead of buying batteries just for this purpose, the vehicle-to-grid concept is to use batteries in electric vehicles when they are parked. It’s an idea much discussed and debated, but only now being implemented by multiple industrial companies.

The first deployment of this type was done by a joint venture between NRG and UD in the United States, which launched the world’s first revenue-generating vehicle-to-grid project on UD’s STAR Campus in early 2013.

“Locally in Delaware, we provide storage used for the service of balancing power on the PJM grid, and they pay us at the end of each month for the amount of balancing power that we provided. We are now doing the same thing in Denmark, although the technical requirements and rules are somewhat different,” said Kempton.

It’s a coordinated effort that involves many partners.

Nissan is providing the cars for the Denmark effort, Enel is the maker and distributor of the V2G charging stations, and Frederiksberg Forsyning is the local fleet operator who purchased and is operating the cars. Nuvve, a startup company, licensed the V2G control and grid integration platform, for use in Europe through UD’s Office of Economic Innovation and Partnerships.

Besides being the first in Europe, this development is significant because all the participating companies are prepared to expand widely, with commercial products.

“This is not just an experiment or trial,” said Kempton.

Kempton and colleagues have been working in Denmark for four years with Danish Technical University, as well as the Danish grid operator to prepare the technical and regulatory basis of the project. The initiative required that specialized charging stations be developed for use in Europe and included significant enhancements to ensure that the V2G technology integrates seamlessly with Denmark’s electric power grid.

The electricity stored in the vehicles’ batteries is controlled and aggregated by a centralized server. UD’s Grid Integrated Vehicle computer software links multiple vehicles together, allowing them collectively to be viewed as a single “power plant.” It’s a complicated task that requires a lot of qualification and testing to local standards and regulations, provided by Nuvve, to officially identify, certify and register the aggregator and charging stations.

On the technology side, UD postdoctoral researcher Stijn Vandael adapted the GIV software so that it would interface properly with the Danish grid operator to ensure that the V2G-enabled vehicles qualify and correctly report what they are doing, so that their owners can be paid for the power service.

According to Gregory Poilasne, CEO and co-founder of Nuvve, the Denmark operation is just one example of how Nuvve is commercializing the UD licensed technology in Europe.

Earlier this year, Nissan and Enel confirmed plans to launch in the United Kingdom a major V2G trial comprising 100 V2G units. Kempton, who is Nuvve’s chief technology officer, has built relationships with other automakers that are developing V2G technologies too, including BMW and Honda, among others.

In the Netherlands, TenneT approved Nuvve’s participation in the frequency regulation market. Nuvve has been working closely with local partner The New Motion, which has 15,000 cars operating, providing grid services for the Dutch grid operators also using the UD licensed technology.

“We are very excited to see the broad adoption of the technology starting and the release of new services that are reducing the cost of ownership of electric vehicles. V2G is the true bridge between the energy used for transportation and the energy used to power our houses. It simply makes the system more efficient to integrate renewable energy sources.” said Poilasne, CEO of Nuvve.

How does the energy flow from the car to the grid and back?

Currently in the U.S. and elsewhere, as the demand for electricity fluctuates, large generators ramp up and down quickly to adjust for the changes and to balance electricity supply and demand. Vehicles equipped with V2G technology and controlled by the GIV server can perform the same function more cost-effectively.

The GIV system monitors the status of the electric grid in a given geographical area to determine whether the grid requires additional power or has excess power that needs to be absorbed.

Then, the GIV platform controls the V2G-equipped electric vehicles to help regulate the local power grid, while those electric vehicle owners earn money for this service. Based on short-term testing by the Danish grid operator in July, Poilasne estimates that on an annual basis, revenue per car would be approximately $1,445 (Euro 1,300) per year.

Kempton and his colleagues developed the concept of V2G, controls for EVs and charging stations and the Grid Integrated Vehicle platform at the University of Delaware, beginning in 1997, and hold four patents in relation to it through UD’s Office of Economic Innovation and Partnerships.

The original UD research team, which includes Fouad Kiamilev, professor of electrical and computer engineering (ECE) and a co-principal investigator on the project, Rodney McGee also in ECE, and lead electrical engineer on the project, and many others, has continued to conduct research and develop V2G technologies, making a practical production system.

Partnership has been a keystone in the V2G technology’s development and advancement, and has led to collaborations with commercial partners in the automotive, electronics and energy industries.

To further develop the V2G platform and assess its technical and business potential, OEIP worked closely with UD’s Office of General Counsel to help form a partnership with NRG (now operating as EVGo), one of the nation’s largest power generation and retail electricity businesses. NRG licensed the UD technology in the United States. Nuvve, a startup company, subsequently licensed the V2G platform for use in Europe.

“These developments in Europe support our conviction that UD’s vehicle to grid platform has the potential to positively impact both the energy business and the environment on a global scale. With the UD technology licensed exclusively to NRG in the US and to Nuuve worldwide outside of the US, we have two partners who have the desire and capability to develop a worldwide business,” said David Weir, OEIP director. 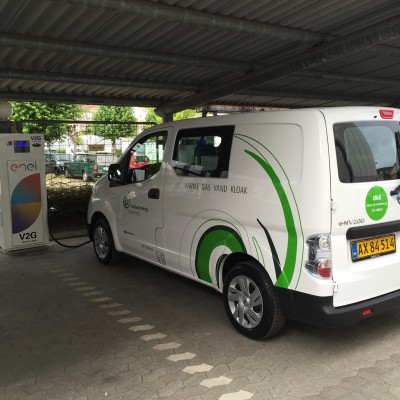 Caption: University of Delaware’s platform for integrating vehicle-to-grid (V2G) technology is now operating in Denmark, creating a new V2G hub outside the United States that is poised to expand widely with commercial products. Ten electric cars and ten V2G charging stations are now providing commercial V2G services in the city of Frederiksberg. 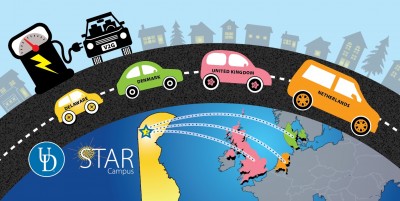