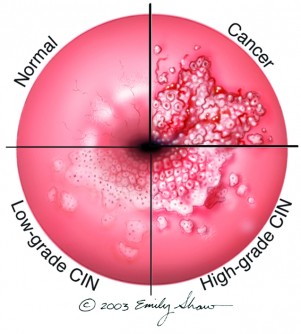 A view of the cervix.

Newswise — Scientists have used a genetically engineered vaccine to successfully eradicate high-grade precancerous cervical lesions in nearly one-half of women who received the vaccine in a clinical trial. The goal, say the scientists, was to find nonsurgical ways to treat precancerous lesions caused by HPV.

“Every standard therapeutic option for women with these lesions destroys part of the cervix, which is particularly relevant for women of childbearing age, who may then be at risk for preterm birth due to a weakened cervix,” says Cornelia Trimble, M.D., professor of gynecology and obstetrics, oncology, and pathology at the Johns Hopkins University School of Medicine, and first author of the new report, which appears online Sept. 17 in The Lancet. “A vaccine able to cure precancerous lesions could eventually be one way women can avoid surgery that is invasive and can also harm their fertility.”

High-grade cervical lesions, termed CIN2/3, occur most often in women 40 or younger, according to Trimble, a member of Johns Hopkins’ Kelly Gynecologic Oncology Service and Kimmel Cancer Center. Because the lesions can progress to cancer, they are usually removed by surgery, freezing or laser. The procedures are successful in removing the precancerous areas in approximately 80 percent of women, says Trimble. Less troublesome lesions, called low-grade dysplasia, are usually monitored by physicians rather than immediately removed because they pose less of a risk for cancer and usually regress on their own.

For the study, the scientists used a vaccine, originally developed by University of Pennsylvania scientist David Weiner, Ph.D., which is engineered to teach immune system cells to recognize precancerous and cancerous cells. Those cells are coated with proteins linked to an infection with two strains of HPV — 16 and 18 — that cause cervical cancer. The vaccine, given by injection into the arm, is made by Inovio Pharmaceuticals Inc., which funded the clinical trial, and whose employees co-authored the report with Trimble.

Between 2011 and 2013, the scientists recruited 167 women, ages 18 to 55, with newly diagnosed, high-grade precancerous cervical lesions. The women were randomly assigned to receive either three doses of the vaccine or saline injections over a 12-week period at 36 hospitals and private gynecology practices in the U.S. and six other countries.

Two patients discontinued the study because of pain at the injection site. Skin redness was more common in the vaccine group compared with saline.

Among women who completed all three injections, scientists could find no trace of HPV in the cervixes of 56 of the 107 women who received the vaccine, compared with only nine of 35 saline recipients.

“In many of these women, the vaccine not only made their lesions disappear, but it also cleared the virus from their cervix,” says Trimble. “In most unvaccinated patients whose lesions went away, the virus was still present, and many still had low-grade lesions.”

Trimble says clearance of the virus is a “significant bonus” from receiving the vaccine because persistent HPV infection is a major risk factor for recurrence of cervical lesions.

In the biopsy samples, the scientists found that patients whose lesions completely regressed after treatment had more immune cells, called T cells, present in the tissue. “It’s important that T cells capable of recognizing HPV stay in the cervix and fight off any recurrence of the infection,” says Trimble.

“This is a great first step,” says Trimble. “We showed that the vaccine may enable an immune response in a person whose immune system was initially not adequately engaged or was hampered in some way so as to let the lesion occur.”

Trimble says that precancerous lesions are unlikely to progress to cancer during the vaccine treatment period, and monitoring of high-grade lesions is done routinely for pregnant women. “It typically takes about 10 or more years for precancerous cells to become cancer, so there is a window of opportunity to intervene with nonsurgical approaches to reverse the process of viral-associated cancers,” says Trimble.

Trimble says she and her colleagues are now working to identify biomarkers from cervical tissue that can predict which lesions are more likely to persist and eventually progress to cancer. The research team will be monitoring this initial group of study participants to see whether they have fewer recurrences than unvaccinated patients. Trimble is also studying other types of vaccines to prevent the progression of high-grade cervical lesions to cancer.

Trimble received an unrestricted grant from Inovio Pharmaceuticals Inc., but she has no other financial or consulting arrangements with the company.