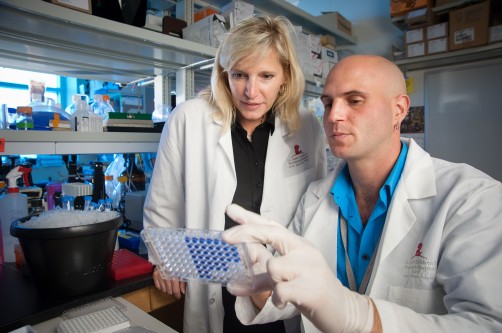 Newswise — A study led by St. Jude Children's Research Hospital found that obese mice are not protected against influenza infections by vaccines that include adjuvants, raising concerns about vaccine effectiveness in obese humans who are known to be at an increased risk for severe flu. The findings appear today in the scientific journal mBio.

“This is the first study to show that current strategies to bolster the effectiveness of flu vaccines protected lean mice from serious illness but fell short of protecting obese mice from infections,” said corresponding author Stacey Schultz-Cherry, Ph.D., a member of the St. Jude Department of Infectious Diseases. The strategies include increasing the vaccine dose and adding substances called adjuvants to vaccines to boost the immune response.

The findings come amid ongoing concerns about flu pandemics launched by avian flu viruses and the global rise of obesity. The World Health Organization estimates that 10 percent of adults worldwide and 42 million children under the age of 5 now qualify as obese. Obesity leaves individuals at increased risk for flu-related complications, including hospitalization and death. “There is a critical public health need to translate these findings to humans and understand vaccine response in this growing segment of the population,” Schultz-Cherry said. Vaccination remains the most effective flu prevention strategy and a key element in pandemic flu preparedness. Meanwhile, research continues at St. Jude and elsewhere to develop more effective flu vaccines, particularly for high-risk groups, including the elderly, pregnant women and obese individuals.

This study used vaccines prepared from killed viruses that are the basis of flu shots. The vaccines targeted an influenza A H1N1 seasonal flu strain as well as A(H7N9), a virus considered to have the potential to trigger a human pandemic. Researchers looked at the immune response to vaccination in lean and obese mice, including how vaccine dose and different adjuvants impacted that response. Both methods have been used to improve vaccine effectiveness in older adults and other high-risk groups.

While adjuvants improved the immune response to vaccinations in both lean and obese mice, the overall immune response was reduced in the obese animals compared to their lean counterparts. Following vaccination, the obese mice had lower antibody levels, including lower levels of neutralizing antibodies, and higher levels of the virus. In addition, lean mice who received vaccines with adjuvants were protected from severe flu infections. Obese mice were not.

“The addition of adjuvants to the vaccines led to levels of neutralizing antibodies in both the lean and obese mice that have been considered to be protective. Surprisingly that did not translate into protection from flu infection or fatal disease in the obese animals,” Schultz-Cherry said. That suggests that obese individuals may be at risk for flu infections even if their blood antibodies reach what have been considered protective levels, she said.

A four-fold increase in the dose of A(H7N9) vaccine bolstered the immune response in both lean and obese mice, but failed to protect the heavier animals from flu-related deaths.

Protective antibodies from lean mice also failed to protect obese mice from flu infections. “That suggests the problem lies with the immune response of the obese animals rather than the antibodies themselves,” said first author Erik Karlsson, Ph.D., a staff scientist in the Schultz-Cherry laboratory.

The obese mice seemed more susceptible to the virus, which remained elevated following vaccination compared to blood levels in lean animals. “The virus penetrates more deeply into the lungs of obese mice, and the animals seem to have a more difficult time repairing the damage,” Schultz-Cherry said.

The other authors are Tomer Hertz of Ben-Gurion University of the Negev, Israel, and Fred Hutchinson Cancer Research Center, Seattle; Cydney Johnson of St. Jude; Andrew Mehle of the University of Wisconsin, Madison; and Florian Krammer of the Icahn School of Medicine at Mount Sinai, New York.