Vaccines Not Just for Babies: New Survey Reveals Teen Health May Be Impacted by Misperceptions

Majority of parents and teens believe it is important for all teens to be vaccinated, yet the rates are far lower than where they should be 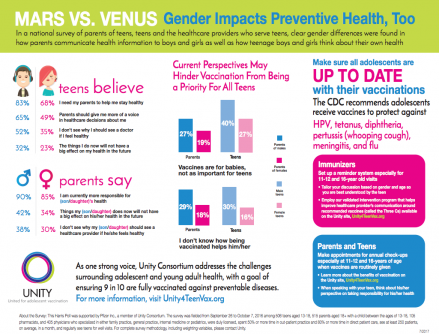 Newswise — NEWTOWN, PA., JULY 11, 2017 – A national survey of parents, teens and healthcare providers (HCPs) revealed some major areas for improvement in preventive health communications to teens.  Nearly all parents realize the importance of “hot topics” to help their teens stay healthy, such as keeping them safe from STDs (92%), avoiding alcohol/drugs/smoking (95%), and getting enough sleep (94%), but somewhat fewer (80%) say getting all recommended vaccines is important, despite them being vital for future health.  Unity Consortium, an action-oriented non-profit organization that brings together diverse groups who share a common interest in adolescent and young adult preventive health with a focus on immunization, sponsored the survey. Unity Consortium strives to make a positive impact to improve adolescent preventive health habits as an investment to better life-long health. The survey was conducted online in the fall of 2016 by Harris Poll among 515 US parents of teens 13-18 year olds, 506 teens ages 13-18 years, 405 physicians who see teens and 105 pharmacists.

A vast majority of parents and teens believe it is important for all teens to be vaccinated.  However, in reality teen vaccination rates are far lower than where they should be. For instance, less than 50% of male teens and 65% of female teens have received the first dose of the HPV vaccine series. Why the reason for this gap? Unity evaluated this closely in a recently published Call to Action, Adolescent Immunization: Understanding Challenges and Framing Solutions for Healthcare Providers, and the survey results reinforced that both parents’ and teens’ attitudes towards preventive health keep them from prioritizing important preventive health strategies like vaccination.

Differences were also seen between younger and older teens. The survey shows that older teens are starting to take more responsibility. They want healthcare providers to help them stay healthy by sending reminders for annual checkups and vaccinations. Older teens also reported that spending time alone with the HCP makes them feel more responsible for their health.  While feeling that way, physicians noted that it is the younger teens who speak more during visits. With regard to vaccines, younger teens and their parents are also significantly more likely to say that vaccines are for babies, not as important for teens.

The issue of ensuring that teens are invested in their own health is even more acute for male teens as clear gender differences were found in the survey results.  Among the 81% of parents who attended their child’s last doctors visit, parents of boys were more likely than parents of girls to report that they themselves spoke most during the visit (34% vs. 17%) and, in turn, boys are more likely to rely more on their parents to help them stay healthy than girls (83% vs. 68%).

“While the vast majority of parents believe that teens want to shoulder more responsibility for their health, only half of doctors agree that teens want to be accountable,” said Paul A. Offit, MD, Director of the Vaccine Education Center and an attending physician in the Division of Infectious Diseases at Children's Hospital of Philadelphia and advisor to Unity Consortium.  “This disconnect widens the communications gap.  Our goal in sharing these survey results is to encourage healthcare providers, parents and teens to communicate better about vaccines.  Because it’s not an exaggeration to say that one shot can mean the difference between life and death.”

Misperceptions about immunizations can have serious consequences

While annual check-ups are critical, the 11-12 and 16-year old appointments are essential for teens to be on the recommended schedule for vaccinations.  The CDC recommends that adolescents receive four vaccines to protect their health in the short and long-term.

Surprisingly, given that science and research have validated the safety and overwhelming benefit of vaccines, nearly 6 in 10 parents (57%) and teens (57%) have safety concerns about vaccines. Among physicians, less than half (44%) have reminders in place to remind teens or their parents about missed vaccinations.  This combination shows a clear gap in the opportunity to assess and discuss the need for vaccination as a vital part of preventive health and to vaccinate.

“We all have a common goal to keep our teens healthy now and in the future, and with the advances in science, we have a great ability to do that,” said Judy Klein, President of Unity Consortium.  “We understand the confusion that can come with something new or how seeing a healthcare provider when healthy may be a low priority. But ignoring these steps has real consequences.  That is why we at Unity won’t stop until preventive health and vaccination become a priority in every household.”

Annual checkups and vaccinations should be the norm, not the exception. The survey reinforces some simple steps:

Additional information on teen preventive health and vaccination can be found at Unity4TeenVax.org.

The national survey was conducted online by Harris Poll on behalf of Unity.   The survey was fielded from September 26 to October 7, 2016 among 506 teens aged 13-18, 515 parents with a child between the ages of 13-18, 105 pharmacists, and 405 physicians who specialized in either family practice, general practice, internal medicine or pediatrics, were duly licensed, spent 50% or more time in out-patient practice and 80% or more time in direct patient care, see at least 250 patients, on average, in a month, and regularly see teens for well visits. For complete survey methodology, including weighting variables, please contact Unity.

UNITY Consortium is a non-profit 501 (c)(3) organization that brings together diverse groups that share a common and passionate interest in adolescent and young adult health with a focus on prevention and immunization. Our members represent public and private organizations, industry, academia, healthcare providers, retailers, and advocacy groups. As one strong voice, Unity Consortium addresses the unique challenges surrounding adolescent and young adult health, prevention and immunization.