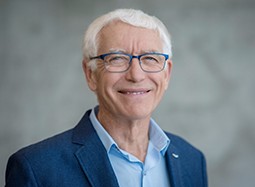 Jones’s award reflects his “trailblazing work advancing medical sciences and technology by pioneering epigenetics and expertly translating his discoveries into clinical treatments, offering new hope for millions of cancer patients worldwide and exemplifying the innovative spirit to which every SU student should aspire,” according to a statement from the University.

“I am honored and humbled to receive this distinction, particularly from a university that played such a major role in the formative days of my career,” Jones said. “Outstanding and impactful science is a team effort, and I have been fortunate over the years to work with exceptional colleagues who share a deep commitment to improving human health.”

Jones was born in Cape Town, South Africa, and served two stints at Stellenbosch early in his career—first as a South African Medical Research Council junior faculty member in the department of Dr. Wieland Gevers and second as Chief Research Officer in the Department of Medicinal Biochemistry at Tygerberg Hospital, which is affiliated with the university’s medical school.

While there, he published a paper on epigenetics, the intricate system that regulates gene expression, that would go on to form the foundation of his career. He later discovered that a drug called 5-azacytidine causes cells to differentiate, revealing a fundamental epigenetic process and paving the way for 5-azacytidine’s use as a treatment for blood cancers.

Jones joined VARI as its chief scientific officer in 2014 after 37 years at University of Southern California, where he served in many leadership roles including a decade as director of the USC Norris Comprehensive Cancer Center. Since then, he has charted a bold new path for the Institute, with a goal of making VARI a globally recognized leader in epigenetics and Parkinson’s disease research.

He has published more than 300 scientific papers and received several honors, including an Outstanding Investigator Award from the National Cancer Institute. He and his colleague Dr. Stephen Baylin shared the Kirk A. Landon Award for Basic Cancer Research from the American Association for Cancer Research (AACR) in 2009 and the Medal of Honor from the American Cancer Society in 2011. Jones and Baylin also are co-leaders of the Van Andel Research Institute–Stand Up To Cancer Epigenetics Dream Team, a multi-institutional effort that brings together leading scientists, physicians and industry partners with one goal—to improve cancer treatment through cutting-edge clinical trials.

The conferral will take place during the University’s 100-year anniversary celebrations and graduation ceremonies in March. Jones joins 13 other luminaries who will also receive honorary degrees from Stellenbosch. A full list is available here.

ABOUT VAN ANDEL RESEARCH INSTITUTE
Van Andel Institute (VAI) is an independent nonprofit biomedical research and science education organization committed to improving the health and enhancing the lives of current and future generations. Established by Jay and Betty Van Andel in 1996 in Grand Rapids, Michigan, VAI has grown into a premier research and educational institution that supports the work of more than 360 scientists, educators and staff. Van Andel Research Institute (VARI), VAI’s research division, is dedicated to determining the epigenetic, genetic, molecular and cellular origins of cancer, Parkinson’s and other diseases and translating those findings into effective therapies. The Institute’s scientists work in onsite laboratories and participate in collaborative partnerships that span the globe. Learn more about Van Andel Research Institute by visiting vari.vai.org. 100% To Research, Discovery & Hope.