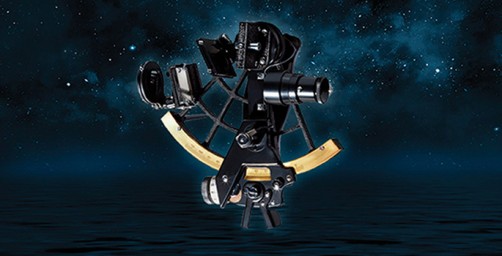 Newswise — This year, on campuses around the country, more than 1,200 midshipmen enrolled in the Naval Reserve Officer Training Corps are learning the ancient and somewhat complicated art of navigating by the stars for the first time in nearly 20 years.

In the 1990’s increasing reliance on navigation technologies including GPS caused the Navy to drop celestial navigation from its officer training curriculum. Now, increasing awareness of the vulnerability of these systems to hacking and other types of disruption has prompted it to reintroduce the requirement.

This spring, as the midshipmen learned how to take sightings of various celestial bodies and then consult a set of nautical tables to ‘reduce’ them to a geographical position, they got an assist from a team of Vanderbilt astronomers and educators headed by Adjoint Assistant Professor of Astronomy Susan Stewart.

For the last 20 years, Stewart has been a staff astronomer at the U.S. Naval Observatory in Washington D.C. where she is responsible for maintaining the publications that contain the tables used for celestial navigation, by charting and predicting the positions of the bright sources in the sky that the military uses for sea and air navigation.

In the course of her work, Stewart encountered a number of navigators who told her that one of the major obstacles to using traditional celestial navigation was knowing how to find the right values in the tables and use them correctly. She realized that an online course would be the perfect platform to address this problem.

“I thought it was important to reduce the impediments to celestial navigation, particularly as the vulnerabilities of satellite navigation have become apparent, so it can serve as a viable backup for navigation,” she said.

In 2013, the astronomer reconnected with Vanderbilt, where she got her undergraduate degree in astronomy, in order to work with students in a research capacity. Since returning to campus, she has mentored a number of students, taught several astronomy courses and developed a Maymester class on eclipses.

In pursuing her idea of creating an online course that could guide people through the complexities of celestial navigation, especially using the complicated tables of positions and corrections, Stewart interested Vanderbilt doctoral student Dave Caudel in the project. Caudel, who is a U.S. Army veteran, had produced some instructional videos on how to use an atomic force microscope and was intrigued by the idea. (He is graduating with his Ph.D. this spring.)

Stewart also made contact with Erica Grundstrom, director of astronomy labs and outreach in the physics and astronomy department.

“Because CelNav is important, is a bit of a lost art, and has some confusing materials that goes along with it, I thought it would be a great challenge to undertake!” Grundstrom said.

In 2014, the three applied for and received a Vanderbilt Center for Teaching Blended and Online Learning Design Fellowship to develop an online celestial navigation module, which they dubbed VandyAstroNav. Caudel produced a series of instructional videos based on the content that Stewart supplied while Grundstrom wrote a site guide and prepared assessment questions to determine how well individuals who take the course have learned the basic principles involved.

After they created the online course, they needed to test it. So Grundstrom recruited students in several of her labs to test drive the module and Stewart, who had contacted the Vanderbilt NROTC office, persuaded them to let the midshipman try it out as well. Based on the feedback the students provided, they made a number of refinements.

About the same time that Stewart’s team was putting the final touches on their course, back in Washington D.C. the Chief of Naval Operations issued a directive to the NROTC to add celestial navigation instruction to its curriculum. So, when Vanderbilt NROTC Captain Scott Kraverath put Stewart in touch with Michelle Rea, NROTC’s curriculum manager, she was quite receptive. When she saw what Stewart and her collaborators had accomplished, she got approval from the Naval Observatory to recruit her for their course development effort.

“Susan really helped us refine our curriculum,” said Rea. “She helped write two courses and trained a number of our instructors. The videos in her online course make it much easier for our students to pick-up the basic concepts involved.”

Since VandyAstroNav was launched in April 2015, it has been freely available on the internet. Users have the option to watch the instructional videos alone or to register to take the complete course. In the last two years 1,125 people have signed up for the full course.

User feedback has been extremely positive, Stewart reported. She pointed to one user comment in particular: "I am simply astounded that such an excellent course on celestial navigation is free online! The videos were well produced with clear graphics that helped with the understanding of the content. Especially helpful were the real examples out of the Nautical Almanac, which otherwise seems like an indecipherable code book. Thanks to Vanderbilt and the authors/producers of this course!"

The website’s usage has increased by 57 percent since the beginning of the year and spiked up in March from between 100 to 200 daily views to more than 375 as NROTC instructors began downloading VandyAstroNav lessons when they reached the celestial navigation section that has been added to the Intro to Navigation class sophomores are required to take.

In addition to NROTC, instructors at the U.S. Naval Academy, which reintroduced celestial navigation two years ago, reviewed VandyAstroNav while developing their coursework and the Navy’s Surface Weapons Officer School has expressed interest in using it in a refresher course.

As a result of this effort, Navy officers will be better prepared in the future should their fancy satellite navigation systems fail and they are forced once again to navigate by the stars.