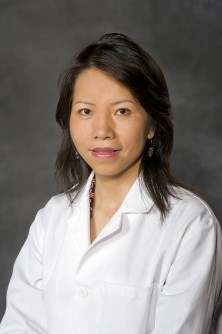 Zheng Fu, Ph.D., lead investigator on the study, member of the Cancer Molecular Genetics research program at VCU Massey Cancer Center and assistant professor in the Department of Human and Molecular Genetics at the VCU School of Medicine

Newswise — Researchers at VCU Massey Cancer Center have uncovered a novel function of the gene PLK1 (polo-like kinase 1) that helps prostate cancer cells metastasize (spread) to other parts of the body. This mechanism highlights new potential targets for cancer therapies and challenges the previous understanding of PLK1’s role in cancer growth and progression.

Recently published in the journal eLife and featured in a poster session at this year’s American Association for Cancer Research (AACR) annual meeting, preclinical experiments show for the first time that PLK1 promotes the migration of prostate cancer cells by setting in motion a process that induces what is known as the epithelial-to-mesenchymal transition (EMT). The EMT is a biological process wherein epithelial cells (cells that line the cavities and surfaces of blood vessels and organs) become mesenchymal (skeletal) stem cells that can move throughout the body and differentiate into a variety of cell types.

“We challenged a current dogma in the field that emphasized PLK1’s role in mitosis (cell division) as a primary mechanism for cancer growth,” says Zheng Fu, Ph.D., lead investigator on the study, member of the Cancer Molecular Genetics research program at VCU Massey Cancer Center and assistant professor in the Department of Human and Molecular Genetics at the VCU School of Medicine. “We showed that PLK1 drives migration of normal prostate epithelial and prostate cancer cells through an entirely different process.”

In preclinical experiments using human prostate cancer cell lines, Fu’s team showed that increased PLK1 expression activated an oncogene known as c-RAF, which has previously been shown to play a role in regulating cell growth and division. However, c-RAF has also been shown to activate signaling through the mitogen-activated protein kinase (MAPK) pathway. MAPK regulates cell functions, including proliferation, gene expression, differentiation, cell division and a form of cell suicide known as apoptosis. The team demonstrated that this enhanced MAPK signaling was responsible for inducing the EMT and stimulating metastasis of prostate cancer cells.

“Our findings could significantly impact the development of PLK1 inhibitors for the treatment of advanced prostate cancer,” says Fu. “Furthermore, the findings may extend to other cancers because previous research has shown a link between enhanced PLK1 expression and invasiveness of colorectal, breast and thyroid tumors.”

Fu plans to further explore the link between PLK1 and MAPK signaling in prostate cancer patients and determine whether PLK1-induced EMT contributes to other cancer-promoting processes that go beyond cell migration and metastasis.

The full manuscript of this study is available online at: https://elifesciences.org/content/5/e10734v1