Veins on Mars Were Formed by Evaporating Ancient Lakes

The Open University and University of Leicester publish study determining the fluids once present in Martian Yellowknife Bay, Gale Crater 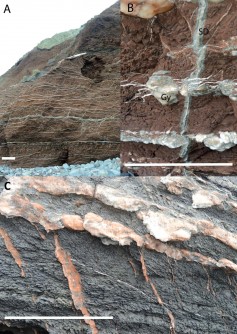 • Results provide evidence for long and varied history of water in Mars Gale Crater• Sulphur and iron rich groundwater in Gale Crater was habitable by Earth standards• Mudstones in Gale Crater close in composition to rocks in Watchet Bay in North Devon, highlighting a terrestrial analogue

Newswise — Mineral veins found in Mars's Gale Crater were formed by the evaporation of ancient Martian lakes, a new study has shown.

The research, by Mars Science Laboratory Participating Scientists at The Open University and the University of Leicester, used the Mars Curiosity rover to explore Yellowknife Bay in Gale Crater on Mars, examining the mineralogy of veins that were paths for groundwater in mudstones.

The study suggests that the veins formed as the sediments from the ancient lake were buried, heated to about 50 degrees Celsius and corroded.

Professor John Bridges from the University of Leicester Department of Physics and Astronomy said: "The taste of this Martian groundwater would be rather unpleasant, with about 20 times the content of sulphate and sodium than bottled mineral water for instance!

"However as Dr Schwenzer from The Open University concludes, some microbes on Earth do like sulphur and iron rich fluids, because they can use those two elements to gain energy. Therefore, for the question of habitability at Gale Crater the taste of the water is very exciting news."

The researchers suggest that evaporation of ancient lakes in the Yellowknife Bay would have led to the formation of silica and sulphate-rich deposits.

Subsequent dissolution by groundwater of these deposits - which the team predict are present in the Gale Crater sedimentary succession - led to the formation of pure sulphate veins within the Yellowknife Bay mudstone.

The study predicts the original precipitate was likely gypsum, which dehydrated during the lake's burial.

The team compared the Gale Crater waters with fluids modelled for Martian meteorites shergottites, nakhlites and the ancient meteorite ALH 84001, as well as rocks analysed by the Mars Exploration rovers and with terrestrial ground and surface waters.

The aqueous solution present during sediment alteration associated with mineral vein formation at Gale Crater was found to be high in sodium, potassium and silicon, but had low magnesium, iron and aluminium concentrations and had a near neutral to alkaline pH level.

The mudstones with sulphate veins in the Gale Crater were also found to be close in composition to rocks in Watchet Bay in North Devon, highlighting a terrestrial analogue which supports the model of dissolution of a mixed silica and sulphate-rich shallow horizon to form pure sulphate veins.

Ashwin Vasavada, Curiosity Project Scientist from the NASA Jet Propulsion Laboratory said: "These result provide further evidence for the long and varied history of water in Gale Crater. Multiple generations of fluids, each with a unique chemistry, must have been present to account for what we find in the rock record today."

About The Open University

The Open University (OU) is the largest academic institution in the UK and a world leader in flexible distance learning. Since it began in 1969, the OU has taught more than 1.8 million students and has almost 180,000 current students, including more than 15,000 overseas.

Over 70% of students are in full-time or part-time employment, and four out of five FTSE 100 companies have sponsored staff to take OU courses.

Space Science at The Open University

Space Science is one of The Open University's Key Strategic Research Areas. OU research into space contributes to major global challenges through scientific exploitation of imaging and detection technologies and to building the Space sector of the UK economy. For further information please visit: http://www.open.ac.uk/research/main/our-research/space

About the University of Leicester