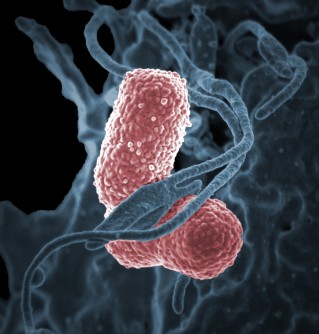 Newswise — The inappropriate or excessive use of anti-microbial agents in past decades has propelled the emergence and spread of multidrug resistant microbial pathogens. According to the European Centre for Disease Prevention and Control and the European Medicines Agency, each year about 25.000 patients in the EU die from infections with multidrug-resistant bacteria. Globally, 700.000 people per year die due to antimicrobial resistance.

The rise of superbugs
Earlier this year, the World Health Organization (WHO) published a report on anti-microbial resistance, with a special emphasis on antibiotic resistance of so-called "superbugs". Such bacteria pose the greatest threat to human health due to their resistance to several different antibiotics.  Among these superbugs is Klebsiella, which can cause severe and often fatal infections of the bloodstream and lungs. Klebsiella has been reported to be resistant to common classes of antibiotics and to a great extent also to carbapenems, the last resort to treat severe nosocomial infections.

Treatment options beyond common antibiotics
The researchers around Pavel Kovarik at MFPL and Jose Bengoechea at Queen’s University Belfast now discovered how immune cells arriving at the site of infection communicate and join forces to eradicate Klebsiella during lung infections. Their study suggests that future therapies of severe Klebsiella infections could target the immune system, rather than the pathogen itself.

Future perspectives Pavel Kovarik and his team are optimistic that their new found results will contribute to the development of urgently needed novel therapeutics against multidrug resistant pathogens. "If drugs fail to kill the pathogen, we should help the immune system do the job. Our current study identifies new and feasible ways how to support the immune system in fighting superbugs."

The research was supported by the Marie Curie Initial Training Network INBIONET, a part of the EU’s Seventh Framework Programme, and the Austrian Research Fund FWF.