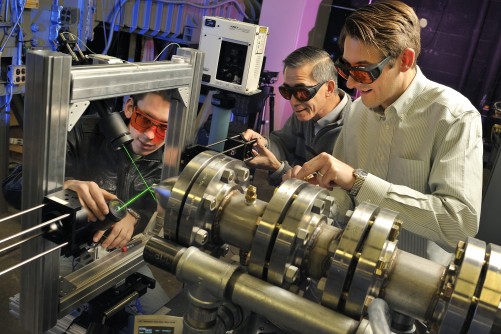 Have you ever had a fighter jet fly over your home and the noise of the aircraft booms loud enough to rattle the windows? Well, imagine working on an aircraft carrier or air base, up close to the engines as they take off or land. Even with ear plugs, the noise can be deafening.

Virginia Tech’s College of Engineering is one of several U.S.-based research teams tasked with finding a solution as part of a three-year project funded by the U.S. Office of Naval Research’s Hot Jet Noise Reduction program, related to a broader Navy initiative known as the Noise Induced Hearing Loss program.

The Navy’s goal: Reduce noise exposure on the flight deck and its impact on the communities near air bases or in the path of jet flyovers. NASA also is partially funding the project.

“It is a subject that has received very little attention in the military world since it doesn’t improve military vehicle performance,” said Todd Lowe, originally of Richlands, Va., and now an assistant professor in the Department of Aerospace and Ocean Engineering.

Yet it has created a problem of hearing loss and damage among military personnel, said Lowe. Measured in decibels – the intensity of sound perceived by humans – the Navy estimates that jet noise from tactical aircraft can reach 150 decibels on the flight line as sailors and Marines prepare fighters and other aircraft for launching. Comparatively, a lawnmower typically produces noise levels of 90 decibels.

Lowe is working on the project with Wing Ng, who holds the Chris Kraft Endowed Professorship in the Department of Mechanical Engineering. Of the total $4 million project, Virginia Tech is to receive $600,000 in various stages as research continues.

Working on Lowe and Ng’s research team are Donald Brooks of Snowville, Va., and Tobias Ecker of Blieskastel, Germany, both doctoral students in the aerospace and ocean engineering program, part of the College of Engineering.

Brooks built an $80,000 model scale hot jet rig – minus the engine – that simulates the noise of a fighter jet by forcibly pushing air through a small nozzle opening at a tremendous speed – roughly 1.6 times the speed of sound. This movement of air and the turbulence it creates causes the roar that is associated with jets.

Tests on the rig system are completed inside a concrete-reinforced basement lab of Randolph Hall, where no one is allowed inside the room while the jet rig is in operation.

The jet apparatus can reach temperatures of 1,000 degrees Fahrenheit. Once the engine is primed, it is activated via remote control from an adjoining room, with closed circuit TVs operating as the “eyes” of the research team. A system of lasers, high-speed cameras, and microphones record the tests visually and audibly. The engine has reached Mach 3, tapped with a 1-inch short nozzle, creating a deafening roar.

“The loudness is exactly the same as a real jet in flight, if heard from a properly scaled distance,” said Lowe. “For instance, our rig has the same loudness to an observer standing 1 foot away as an observer who is standing about 50 feet away from the real jet engine in flight.”

The jet rig entails a Sylvania 192 kilowatt heater that is larger and more powerful than similar models because it uses only one inline heater rather than multiple ones, Brooks said. The change makes the apparatus smaller and easily portable.

“The idea was to have the ability to take the jet rig to other facilities such as anechoic test facilities to do more studies on the jet flow, without having to build multiple rigs in different locations,” said Brooks.

Lab tests are only the beginning of the multi-stage research project, begun last year. The second stage of the project includes a JT15D jet engine now housed at the nearby Virginia Tech Montgomery Executive Airport. There the stationary jet – built into a large scaffold – can be fired, with the blast noise and flow of air recorded, again, both by high-speed cameras and microphone.

A third stage may involve testing with stationary engines from F18 jets.

“As air travel continues to expand, we can’t let our cities be polluted by the noise generated by these aircraft in takeoff and landing. The second impact that jet noise has on the human way of life is directed at our service men and women on board aircraft carriers,” said Brooks.

“These men and women put their life on the line every day, but it sometimes gets neglected that they also put their hearing on the line. Many Navy veterans have ended up with large amounts of hearing damage due to the harsh acoustic environment created on the deck of an aircraft carrier.”

Once all data is collected, Lowe said the U.S Office of Naval Research will take the expertise and carry on the work in building noise-mitigation technology that will combine with ear protection. Lowe said the jet rig equipment may find additional lab uses, including the possible testing of heat on asphalt surfaces to mitigate melting.

Added research partner Ng, “I can see that in a few years, our measurement technique developed for jet noise research will be used by many researchers from around the world, and this technique can also be used to study jet noise from commercial jet liner, such as the Boeing 787 Dreamliner.”