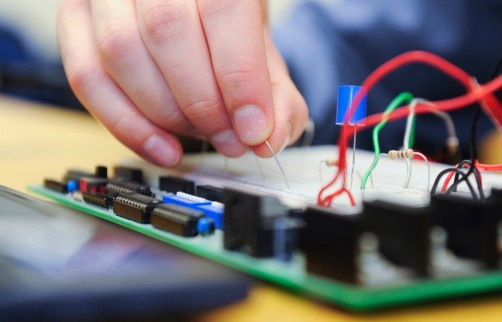 Newswise — The National Science Foundation has awarded more than $2.5 million in research funding to Wireless@Virginia Tech for projects in support of the White House's Advanced Wireless Research Initiative, which promotes innovative spectrum policy and research to speed the deployment of a new generation of wireless networks that may be up to 100 times faster than today’s.

The funding will address critical issues concerning emerging wireless communication networks and technology, which are vital to economic growth and development in the United States.

"The five research projects awarded to Virginia Tech are intended to propel the technological revolution of wireless for decades ahead, from spectrum management to the Internet of Things,” said NSF program director Thyaga Nandagopal. “The White House initiative aims to deploy and use four city-scale testing platforms for advanced wireless research over the next decade with Platforms for Advanced Wireless Research, a program designed to develop wireless research platforms conceived by the U.S. academic and industrial wireless research community."

Multiple faculty members from the Bradley Department of Electrical and Computer Engineering in Virginia Tech’s College of Engineering and Wireless@Virginia Tech, a cognition and communication center funded by the Institute for Critical Technology and Applied Science, will serve as academic research partners to create solutions fundamental to the nation's progress.

“Virginia Tech is a world leader in radio spectrum and cognitive radio research, “said Michael Buehrer, professor of electrical and computer engineering and director of Wireless@Virginia Tech. “We are pleased NSF has invested in our efforts to drive research to the next level in support of the White House’s initiative.”

• The first and the largest of the five awards, totaling $830,356, “Implications of Receiver Front End Nonlinearity on Network Performance: Fundamentals, Limitations, and Management Strategies,” focuses on overcoming limitations of low-quality radio receivers that cause interference or are susceptible to interference. The principal investigator on this project is Jeffrey Reed, the Willis G. Professor of ECE, and co-principal investigators are Allen MacKenzie, associate director of Wireless@Virginia Tech and associate professor of ECE, and Vuk Marojevic, research associate of ECE.

• The second award, for $600,000, will fund an upgrade to Virginia Tech’s Cognitive Radio Network Testbed, a collection of 48 software-defined radio nodes deployed within a four-story building, Kelly Hall, on Virginia Tech's main campus. This facility will be used to test new concepts in wireless access, including techniques that will use artificial intelligence to control the radios. The grant will also support educational and outreach efforts to reach students and STEM professionals through demonstrations, conferences, and an annual international student design contest. The principal investigator on this award is Carl Dietrich, associate research professor of ECE, and co-principal investigators are Jerry Park, professor of ECE; Vuk Marojevic, research associate of ECE; and Reed.

• The fourth award, for $400,000, for “Smart Interference Management for Wireless Internet of Things,” will study how to cope with the potential interference in the coming Wireless Internet-of-Things (W-IoT), consisting of billions of wireless devices creating enormous amounts of data traffic over the airwaves. Tom Hou, the Bradley Distinguished Professor of ECE and principal investigator, will work to create and demonstrate a new approach for W-IoT devices to automatically invoke and configure interference management techniques to ensure smooth wireless communications.

• The fifth award, totaling approximately $1 million with Virginia Tech’s share coming to $375,000, is a collaborative project with Temple University and the University of Arizona called “Coexistence of Heterogeneous Wireless Access Technologies in the 5 GHz Band.” It seeks to create solutions for enabling the harmonious coexistence between unlicensed-LTE, Wi -Fi, and Dedicated Short-Range Communications (DSRC) operating in the same band. Jerry Park, professor of ECE and principal investigator, will work to develop solutions for new emerging technologies beyond today’s LTE, Wi-Fi, and DSRC systems.

“NSF has a long, proud history of catalyzing fundamental research in networking and communications that has resulted in profound impacts for science and society,” said Jim Kurose, head of computer and information science and engineering at the NSF. “Fundamental research on advanced wireless will be transformative and take us beyond the current and next generation of wireless – beyond what has been envisioned thus far.”