Virginia Tech, Ecuadoran Scientists Study Rare ‘Pinocchio Lizard’ in Effort to Save It 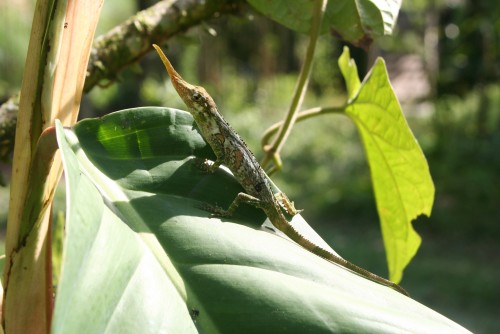 Researchers seek to know more about the 'Pinocchio Lizard' to save it from extinction.

Newswise — For more than 50 years, scientists thought that the horned anole lizard — sometimes called the “Pinocchio Lizard” for its long, protruding nose — was extinct. But it turns out this is a tall tale.

Scientists re-discovered the lizard in 2005, living elusively at the tops of tall trees in the cloud forests of Ecuador — the only place in the world that it is known to exist.

A team led by a Virginia Tech scientist recently uncovered new information about the role that the lizard’s long nose plays. Only the males have long noses, and they appear to be used in social interactions, both among males and between males and females.

Previous investigators had wondered if the nasal appendage served as a weapon of some sort in male-male interactions.

“It’s important that we learn as much as we can about the natural history, social behavior, and ecology of this lizard, in order to save it from true extinction,” said Ignacio Moore, an associate professor of biological sciences in the College of Science, a Fralin Life Science Institute affiliate, and a faculty member with the new Global Change Center at Virginia Tech.

Moore and his colleagues presented their findings at the 2015 Annual Meeting of the Society for Integrative and Comparative Biology in West Palm Beach, Florida. Quirola is now preparing an article about the findings.

While in Ecuador on research sabbatical, Moore partnered with Omar Torres-Carvajal, a faculty member at the Pontificia Universidad Católica del Ecuador in Quito, and Torres-Carvajal’s undergraduate student Diego Quirola.

Late at night, wearing head lamps and shimmying up trees, the team was able to catch a few dozen lizards. They held them in an outdoor facility built to mimic the lizards’ natural habitat and observed them for a couple days, after which the lizards were returned to the exact branch where they were found.

“We were able to observe and videotape 11 copulations and two male-male combat scenarios,” said Quirola. “The nasal appendage was not used as a weapon in these interactions but was used as part of the social displays. The appendage is lifted during the social interactions although what role this specific movement plays is unclear.”

What is becoming clear is that the appendage is an important part of their social interactions and a unique aspect of the natural history of this remarkable lizard.

Since it’s rediscovery in 2005, the Pinocchio lizard is quickly becoming a commodity for its strange beauty and rareness, with pet smugglers offering large sums of money for its capture.

“It’s important for scientists to educate the public about the biological importance of this lizard. It is not a pet but a truly remarkable product of nature,” said Moore.

2015 Annual Meeting of the Society for Integrative and Comparative Biology