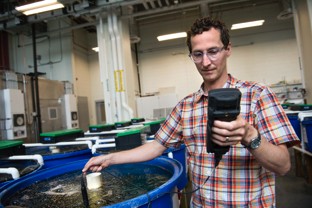 “Ultimately, the repercussions of poor water quality impact not only our own drinking water, but also our economy,” said Durelle “Scotty” Scott, an associate professor of biological systems engineering. “One of the main concepts behind federal protection is that water runs down hill, across political boundaries. Balancing needs of upstream and downstream water demands requires holistic management and protection.” (Scott’s full bio)

The clean water rule, one of former President Barack Obama’s major environmental regulations, was written to clarify and establish the federal government has the authority to regulate smaller streams and headwaters, and about other water sources such as wetlands. “We all have a stake in clean water and protection of streams and wetlands. Fundamentally, wetlands and headwater streams lead to larger streams and rivers,” Scott said. “Ultimately, protecting our nation’s small streams and wetlands provide inexpensive ecosystem services throughout river corridors, something that would be much more expensive to fix “downstream.”

In the Chesapeake Bay alone, recreational and commercial fishing contributes over $1 billion to the economy. Poor water quality increases filtration costs for drinking water municipalities, and can drive businesses away that require clean water.

Today, we have the opportunity to maintain and even increase agricultural production on the landscape while protecting river corridors. Technological and scientific advancement provides opportunities for targeted management practices, Scott said.

BackgroundWithin the United States, there are over 3 million miles of streams that range from the smallest headwaters to the mighty Mississippi. The smallest streams, known as headwaters, represent over 50 percent of the total river miles. Wetlands are also found throughout the landscape, and are hydrologically connected to the river corridor.

Across the U.S., surface water withdrawals from streams and lakes are the most common water source for drinking water. Within Virginia alone, there are over 800 surface water withdrawals, where 230 are for drinking water supply. Other uses include manufacturing and agriculture, both of which require clean water. For example, one of the primary questions of breweries when considering a new plant (e.g. Deschutes in Roanoke) is the quality of the source water.