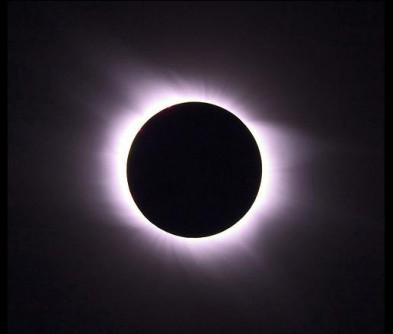 The Aug. 2008, solar eclipse at the point of totality, when the moon completely blocks out the body of the sun, revealing the normally hidden, halo-like corona.

August 21 is a once-in-a-lifetime opportunity for many in the U.S. to see a total eclipse — but for scientists and engineers, it’s a chance to conduct research on systems we rely on for communication, safety and even transportation.

A Virginia Tech expert, backed by research funding from NASA and the National Science foundation, will lead an experiment to study those effects, along with a host of other changes in the upper atmosphere that have an impact on radio propagation.

Greg Earle, a professor of electrical engineering, heads up a team of faculty, staff, and students studying the effects on systems we use everyday – such as over-the-horizon radar, amateur radio, and even the global positioning system or GPS, which helps guide us through traffic.

“Radio wave propagation is affected by the electrical part of the atmosphere and during the eclipse, we really have the opportunity to collect data and learn more about the impact of these changes on systems we’ve come to rely on,” said Earle.

The Virginia Tech team plans to gather data from a variety of sources, including radar systems, transceivers, satellites, ham radio, and GPS receivers, in order to analyze the effects of the solar eclipse on the conductive region of the atmosphere.

“Whether military radar, or consumer GPS signals, the eclipse is going to have effects on the medium that we would like to understand better, so that we can either mitigate them or use them to our advantage,” said Earle.