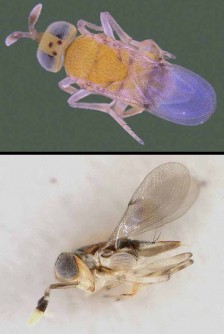 Of the parasitic wasps imported from Mexico, the Acerophagus papayae, top, was found to be effective against the papaya mealybug in India. The bottom image shows one of the other wasps deployed, Anagyrus loecki.

Newswise — Virginia Tech researchers who first discovered a devastating pest in India and devised a natural way to combat it have now put an economic value on their counterattack: up to $309 million the first year and more than $1 billion over five years.

That’s the amount of damage the papaya mealybug would have wreaked on farmers and consumers in India without scientists’ intervention.

The papaya mealybug ripped through crops including papaya, eggplant, and tomato in southern India – causing mold and stunted growth – before Rangaswamy “Muni” Muniappan of Virginia Tech identified the pest and spearheaded the natural control program.

For a relatively modest cost of $200,000 during the first year of the intervention, devastation that would have totaled from $524 million to $1.34 billion over five years was prevented, Muniappan and other scientists report in the February issue of the journal Crop Protection.

“India’s first efforts to eradicate the papaya mealybug failed,” says Muniappan, who heads up Virginia Tech’s federally funded Integrated Pest Management Innovation Lab program, a venture that works in developing countries to minimize crop losses, increase farmer income, and decrease pesticide use. “The government and farmers tried spraying pesticides, but crop losses kept getting larger. It was clear to us that this was a case not for poisons but for natural, biological controls.”

The winning intervention centered on three parasitic wasps from Mexico, natural enemies of the mealybug that the U.S. government first employed in Florida after the pest spread there in the late 1990s. The wasp lays its eggs inside the mealybug larvae, and when the eggs hatch, the young wasps eat the larvae.

Virginia Tech’s work to stop the papaya mealybug is “an important contribution” to protecting U.S. crops, says Marjorie A. Hoy, a University of Florida entomologist not associated with the Virginia Tech study who was instrumental in controlling a Florida infestation.

“It’s impossible for regulatory agencies at the borders to inspect and remove any infested material – they try, but it’s impossible to do it all," Hoy says. "I’m happy to hear that [Virginia Tech scientists] conducted an economic analysis. That is so often missing in biological-control projects.”

Scientists first identified the papaya mealybug in Mexico, where natural enemies kept it under control, according to the research paper. It was found on St. Martin Island in 1995, and by 2000 it had spread to Florida, the Caribbean, and Central and South America.

The paper’s authors include Stephanie Myrick of Virginia Tech’s College of Agriculture and Life Sciences and representatives from Tamil Nadu Agricultural University in India.