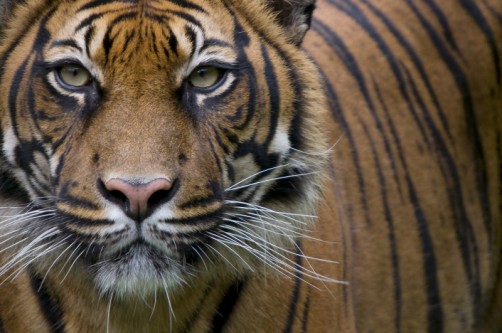 Sumatran tigers are threatened with extinction; it is estimated that fewer than 400 currently survive in the wild.

Newswise — Sumatran tigers, found exclusively on the Indonesian island of Sumatra, are on the brink of extinction. By optimistic estimates, perhaps 400 individuals survive. But the exact the number and locations of the island’s dwindling tiger population has been up for debate.

Virginia Tech and World Wildlife Fund researchers have found that tigers in central Sumatra live at very low densities, lower than previously believed, according to a study in the April 2013 issue of Oryx -- The International Journal of Conservation.

The findings by Sunarto, who earned his doctorate from Virginia Tech in 2011, and co-researchers Marcella Kelly, an associate professor of wildlife in the College of Natural Resources and Environment, and Erin Poor of East Lansing, Mich., a doctoral student studying wildlife science and geospatial environmental analysis in the college, suggest that high levels of human activity limit the tiger population.

Researchers studied areas and habitat types not previously surveyed, which could inform interventions needed to save the tiger.

“Tigers are not only threatened by habitat loss from deforestation and poaching; they are also very sensitive to human disturbance,” said Sunarto, a native of Indonesia, where people typically have one name. “They cannot survive in areas without adequate understory, but they are also threatened in seemingly suitable forests when there is too much human activity.”

The smallest surviving tiger subspecies, Sumatran tigers are extremely elusive and may live at densities as low as one cat per 40 square miles. This is the first study to compare the density of Sumatran tigers across various forest types, including the previously unstudied peat land. The research applied spatial estimation techniques to provide better accuracy of tiger density than previous studies.

Sunarto, a tiger and elephant specialist with World Wildlife Fund–Indonesia, collaborated on the paper with Kelly, Professor Emeritus Michael Vaughan, and Sybille Klenzendorf, managing director of WWF’s Species Conservation Program, who earned her master’s and doctoral degrees in wildlife science from Virginia Tech. The WWF field team collected data in partnership with the Indonesian Ministry of Forestry staff.

“Getting evidence of the tigers’ presence was difficult,” Kelly said. “It took an average of 590 days for camera traps to get an image of each individual tiger recorded.”

“We believe the low detection of tigers in the study area of central Sumatra was a result of the high level of human activity — farming, hunting, trapping, and gathering of forest products,” Sunarto said. “We found a low population of tigers in these areas, even when there was an abundance of prey animals.”

Legal protection of an area, followed by intensive management, can reduce the level of human disturbance and facilitate the recovery of the habitat and as well as tiger numbers. The researchers documented a potentially stable tiger population in the study region’s Tesso Nilo Park, where legal efforts are in place to discourage destructive human activities.

The study -- “Threatened predator on the equator: Multi-point abundance estimates of the tiger Panthera tigris in central Sumatra" -- indicates that more intensive monitoring and proactive management of tiger populations and their habitats are crucial or this tiger subspecies will soon follow the fate of its extinct Javan and Balinese relatives.

Oryx -- The International Journal of Conservation