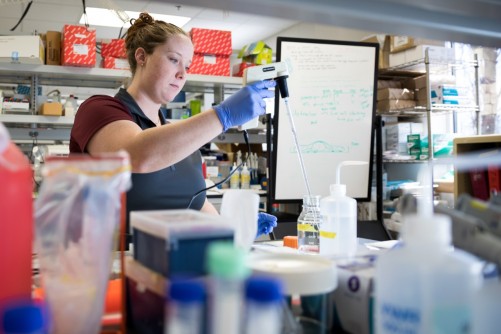 Alexandra Hyler prepares samples for testing in the lab. Hyler led a study that examined the effects of fluid shear stress on ovarian cancer development and progression, which found that even normal fluid flow in the abdominal cavity can cause cancerous and benign cells to become more aggressive. 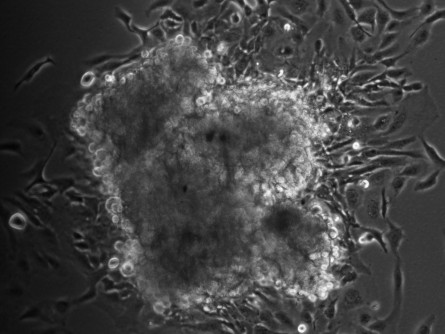 Newswise — Ovarian cancer is known as the silent killer. With an unfortunate knack for spreading throughout the body undetected, the disease has almost always progressed to an advanced stage before patients receive a diagnosis. Symptoms are often vague and doctors currently have no reliable diagnostic test for ovarian cancer at their disposal.

If scientists could identify what triggers healthy ovarian cells to turn malignant, they'd at least be able to pinpoint a predictor of the disease. Such a predictor might lead to an earlier diagnosis, which could lead to more effective treatment and save the lives of thousands of women each year.

New research from Virginia Tech is moving physicians closer to that goal. Published in PLOS ONE, the study found that cancerous cells in the abdominal cavity exposed to fluid shear stress – the force effect of the body’s fluid moving along and around organs – caused those cells to become more aggressive.

Additionally, the researchers discovered that benign cells exposed to fluid shear stress began to look more and more like cancer.

“We saw those aggressive cancer cells continue to get more aggressive,” said Alexandra Hyler, a doctoral student in the department of biomedical engineering and mechanics in the College of Engineeringand the study’s lead author. “When we put those cells under conditions that mimicked your basic, everyday fluid flow in a healthy individual, they showed traits indicative of progression, like changes in their cytoskeleton and increased focal adhesions. These cells also started forming tumor-like structures, or what we call spheroids.”

“In the benign cells, it got even scarier,” said Hyler. “Those cells started to look like aggressive cells. We were actually seeing traits of cancerous cells exhibited in these benign cells.”

Hyler, who first became interested in the project from a women’s health perspective when she joined the BIOTRANS program several years ago, explained that the physical environment of cancer has recently emerged as a hallmark of the disease. As such, environments like the abdominal cavity, known as the peritoneal cavity, have become a target for many cancer researchers.

“Where the ovaries are located at the base of that cavity is very susceptible to fluid movement,” said Hyler. “Those cells can easily get picked up from the base of your abdomen and taken to other locations.”

To study how fluid shear stress affected the development and progression of ovarian cancer, the researchers subjected mouse ovarian cells at three different stages – benign, slowly developing cancerous, and aggressively cancerous – to a system of fluid flow similar to what actually happens in the body.

They paralleled this dynamically progressive mouse model to ovarian cells from human patients at the benign and cancerous stages.

“We used these mouse cells to validate our findings and to show that the results were similar to what we were seeing of ovarian cancer in the human cells,” said Hyler. “The mouse cells helped us validate the overall relevancy of the model.”

Eventually, the researchers hope to answer questions like how and when the cells transition from benign to cancerous. Future studies could address protein and gene activation as well as a further examination of the role fluid shear stress plays in the promotion of cancer invasion.

“If we discover how these cells respond to the physical stress of fluid shear, we might be able to specifically inhibit these signaling pathways and delay, or even prevent, the survival of metastases and their secondary outgrowth,” said corresponding author Eva Schmelz, an associate professor in the department of human nutrition, foods, and exercise. “These events could be targets for specific drugs that could prolong the life of women with metastatic ovarian cancer.”

Hyler is already working on a better system for controlling shear stress in future experiments, which could be used for long-duration studies that might be able to correlate fluid shear stress magnitudes to cellular responses.

“There has to be an underlying biological mechanism at work here, and we don't have the answer to that question yet,” said Hyler. “If you could pinpoint something that’s responding to the changes of that mechanical force, or what we call mechanosensors, then you're talking about ways to step in for earlier diagnosis and treatment.”

“We’re trying to create a better understanding of this disease,” she said.

This research was funded in part by the National Science Foundation and the Virginia Tech Institute for Critical Technology and Applied Science. Additional authors include Mark Stremler and Rafael Davalos of the department of biomedical engineering and mechanics, Megan Brown of the department of human nutrition, foods and exercise, and Nicolaas Baudoin and Daniela Cimini of the Biocomplexity Institute.