Virus may jump species through rock-and-roll motion with receptors

23-Sep-2019 11:20 AM EDT, by Penn State Institute for Computational and Data Sciences
favorite_border 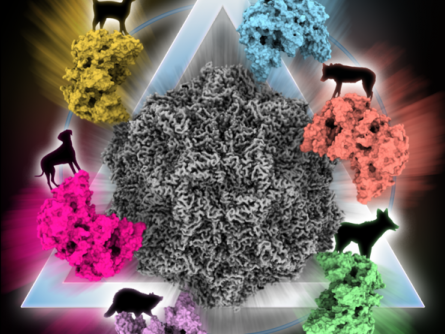 Newswise — UNIVERSITY PARK, Pa. -- Like a janitor thumbing through a keychain to find just the right key to open lock, the rock-and-roll motion of the canine parvovirus during the binding process may help explain how the virus can find the spot on a receptor to infect not just dogs, but multiple species, according to an international team of researchers.  The model could also lead to a better understanding of how viruses enter a human body.

The researchers, who report their findings today (Sept. 23) in the Proceedings of the National Academy of Sciences, used a sophisticated electron microscope that can take pictures of structures at the atomic level to examine the virus as it interacted with the transferrin receptor, or TfR, a protein on the surface of the cell that helps manage a body’s iron uptake.

“The virus uses the same receptor in many different species of animals,” said Susan Hafenstein, associate professor of biochemistry and molecular biology and an affiliate member of the Huck Institutes of Life Sciences. “All of these animals -- including raccoon, mink, cats, dogs -- have a transferrin receptor, and, as you can imagine, the receptor would be slightly different depending on the species. So how is a virus able to use the receptor from a fox and the same receptor from a wolf or a cat?”

The key may be motion generated by the virus and receptor molecules when they interact. The study shows that when the molecules interact, they  can sway, which allows the virus to roll around the receptor point-of-contact searching for the right place to bind, according to Hafenstein, who is also an associate of the Institute for CyberScience, which provides Penn State faculty access to supercomputer resources.

Once it binds, the virus hijacks the iron-uptake process that TfR regulates.

"TfR's job is to bind iron-loaded transferrin," said Hafenstein. "So that when that iron-loaded transferrin binds to the receptor, it signals the receptor: 'OK. It's time to get into the cell.’ At that point, the virus hitches a ride. For us, this was pretty exciting because it makes so much biological sense. If the virus binds naked TfR, it would just sit at the cell surface, but it prefers the TfR that's about to go in.”

Understanding the virus’s versatility of attacking the receptor gives scientists a new understanding of how the disease swept through animal and pet populations in the 1970s.

Hafenstein added that scientists were particularly baffled at the evolution of canine parvovirus because it is a DNA-based virus.

“DNA viruses are not very well known for being able to jump species,” said Hafenstein. “They don’t exist with a lot of mutations, like RNA viruses such as HIV, which is treated with a drug cocktail because the virus mutates so rapidly.”

According to the researchers, this work may inform further investigations into the interactions between viruses and humans to see if this rock-and-roll motion is a wider phenomenon. If so, that could pave the way for new treatments.

“What I study is virus and host interactions because entry can be very, very specific, so if we can figure out the mechanisms that control entry, that's a good target to stop the virus,” said Hafenstein.

The work would likely not have been possible without the cryo-electron microscope at Penn State, said Hafenstein. The device,  uses ultra-cold temperatures to create high-resolution images that are reconstructed into three-dimensional maps of structures, allowed the researchers to see the virus in rich detail. However, the team used special analysis take the study further and  noticed signs of motion of the virus-receptor interaction.

“This is marvelous -- these are the kinds of things we can do with the cryo-electron,” said Hafenstein. “This study was actually an application of using the microscope that we didn’t even know we could do. Typically, cryo-EM gives you a snapshot at atomic resolution, but by using innovative classification combined with three different asymmetric approaches, we were able to predict this flexibility and movement.”

The National Institutes of Health, the National Science Foundation and the Pennsylvania Department of Health supported this work.