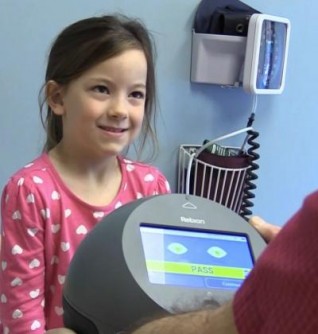 Within seconds of the screening, the blinq™ device calculates a binocularity score based on foveal alignment and provides a “pass” or “refer” result to the clinician. 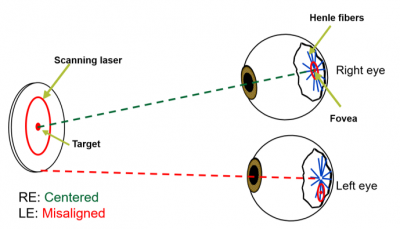 blinq™ uses a polarized light to scan the nerve fibers surrounding the foveas in each eye. It can detect even small misalignment between the eyes’ foveas, which can interfere with the brain’s ability to integrate the images from both eyes.

Newswise — The National Eye Institute (NEI) has funded the development of a handheld pediatric vision scanner that easily and accurately screens for amblyopia, or “lazy eye.” The device could facilitate earlier identification of children who need vision-saving treatment when therapy is likely to be more effective. It also could reduce unnecessary referrals to ophthalmologists.

The device, called blinq™, detects a misalignment of the eyes known as strabismus, a condition that can interfere with the eyes’ ability to work together. The blinq™ device is unique because it detects even subtle strabismus. It was developed and tested with support of an NEI Small Business Innovation Research grant, a funding mechanism that helps independently owned companies with 500 or fewer employees bring biomedical technologies to the market. NEI is part of the National Institutes of Health.

“Vision loss from amblyopia is entirely preventable if diagnosed and treated early. Having a reliable screening strategy is one of the most important things we can do to prevent vision loss from the disorder,” said Eileen Birch, Ph.D., director of the Crystal Charity Ball Pediatric Vision Laboratory at the Retina Foundation of the Southwest.

Amblyopia is an impaired vision in one eye that occurs when the brain does not recognize the sight from that eye, even though it is structurally normal. It is the leading cause of preventable monocular (single eye) vision loss, affecting three of every 100 children in the U.S.

During early childhood, our developing brains learn how to take images from each eye and fuse them into a single image to produce vision. Amblyopia develops when an impairment such as strabismus, refractive error, or cataract interferes with the brain’s ability to process visual information from one eye, causing it to favor the other eye. Once a child is visually mature, vision loss from amblyopia cannot be corrected with glasses or contact lenses.

Children with amblyopia can suffer from poor school performance and impairments in-depth perception and fine motor skills such as handwriting and other hand-eye coordinated activities. Some studies show that amblyopia negatively affects self-esteem. People with amblyopia are at increased risk of visual disability, should they lose vision in their good eye.

Amblyopia treatment forces use of the “weak” (nondominant) eye by covering the dominant eye for several hours each day with a patch or blurring it with atropine eye drops. Ideally, treatment begins by age 2 or 3, when the brain is actively forming neural connections. If treatment starts after age 7, the amblyopia may never improve.

Diagnosing amblyopia requires an eye health specialist to thoroughly assess visual acuity and the ability of the eyes to work together. A dilated eye exam, when drops are placed on the eye to widen the pupil, is also performed by the physician to look for structural abnormalities.

Healthy children do not routinely go to an eye health specialist; therefore, the primary care provider must perform screening to identify children in need of a specialist exam. The U.S. Preventive Services Task Force recommends that preliminary vision screening occur for all children at least once between the ages of 3 and 5 years. Generally, pediatricians and family physicians incorporate such vision screening into an annual well-child visit.

“Initially, eye charts were all that was available for vision screening. That strategy worked well for six-to-seven-year-olds, and some five-year-olds. But it detects amblyopia too late to fully treat,” said David Hunter, M.D., Ph.D., co-inventor (with David Guyton, M.D., professor of pediatric ophthalmology at the Johns Hopkins Hospital in Baltimore) of the blinq™ device and ophthalmologist-in-chief at Boston Children’s Hospital. Hunter is also co-founder of Rebion, the Boston-based firm that markets the device.

About two decades ago, photo screening devices started to become available to screen for amblyopia in children as young as two. The devices are not diagnostic for amblyopia, but instead, detect risk factors for it. Photoscreeners shine a light beam into the eye and an infrared camera takes pictures showing how the light is focused by the eye. The images are then interpreted by software incorporated into the equipment.

In 2012, medical professional organizations including the American Academy of Pediatrics and the American Academy of Opthalmology endorsed the use of such instrument-based vision screening. Since then, insurance companies have begun covering the cost of a test. While photo screeners are becoming more widely used in pediatric practice, many practices continue to struggle to identify amblyopia.

In other words: When 1 in 5 children have an amblyopia risk factor, but amblyopia occurs in only 1 in 40 children, that means that only about 1 in 8 children with risk factors who get referred to an eye health specialist for further evaluation actually end up having amblyopia. That is a false referral rate of 87.5%.

By comparison, the blinq™ pediatric vision scanner has a much lower false-positive rate, less than 15%.

The blinq™ device is a polarized laser scan that probes the nerve fibers inside the retina, the light-sensing tissue at the back of the eye. This allows blinq™ to detect small-angle strabismus, which is a subtle misalignment of the eyes’ foveas, the area of the retina used for sharp, central vision. Even a small misalignment of the foveas can interfere with the brain’s ability to integrate images from both eyes. When detected with precision, misalignment of the foveas identifies essentially 100% of children who have amblyopia, with fewer false positives compared with photo screeners.

To use, blinq™ is held 14 inches from the child’s eyes. While the child fixates on a smiley face, the device simultaneously scans both retinas in 2.5 seconds. The scans determine the precise position of nerve fibers surrounding the fovea. blinq™ detects even a one-degree misalignment between foveas—a sign that amblyopia is present. The device calculates a binocularity score which indicates whether the child requires referral to an eye health physician for further investigation.

Rebion’s earlier model of blinq™, the Pediatric Vision Scanner, was put to the test in a general pediatric practice within the Kaiser Permanente system. Primary care providers used it to screen 300 children, ages 2-5 years, with no known eye conditions. Pediatric ophthalmologists masked to the device’s findings performed comprehensive dilated eye exams to confirm the findings. The device detected all six children who were found to have amblyopia and/or strabismus on the specialist eye exam. The overall false referral rate was 15%, but when only children who had excellent cooperation for the test were included, the false referral rate was only 9%.

In a separate study, this one using the commercial release of blinq™ in 80 children in an ophthalmology practice at Eye Physicians of Central Florida, the blinq™ device again detected 100% of children with amblyopia or strabismus, this time with a false referral rate of just 3%. Both studies were presented at the American Academy of Ophthalmology 2019 annual meeting.

In his pediatric practice, Andrew Schuman, M.D., uses blinq™ to screen children for amblyopia starting at age two. “It takes some experience to get used to using the device. But it’s a quick test that the nurses perform within a minute,” said Schuman, clinical assistant professor of pediatrics, Geisel School of Medicine at Dartmouth University, Lebanon, New Hampshire.

Although he made the switch to using blinq™ for amblyopia screening, Schuman adds that he still relies on photo screeners to screen children age five and older for refractive errors to determine if they could benefit from wearing glasses, especially as they start school.

Schuman points out, however, that even with improved accuracy for amblyopia detection, there are many roadblocks to amblyopia treatment. Healthy People 2020 data show that fewer than 40% of children get their vision tested by age five.

“Even when children do have amblyopia screening, it’s tough to get parents to understand the urgency for following up with an eye doctor should their child require it,” he said. In his practice, out of 1,062 children screened for amblyopia in one year, 115 required referrals for suspected amblyopia. But of those, only 22 (19%) followed up with the specialist. In many cases, the lack of insurance coverage for ophthalmology visits is a major challenge.

Cleared by the U.S. Food and Drug Administration in 2016, each blinq™ device retails for $8,995. How much insurance companies will reimburse pediatric practices for use of blinq is still being determined. But Schuman estimates that if insurance companies pay pediatric practices $25 per test, similar to the reimbursement for photo screening, the device will pay for itself after 360 screens, which for many practices can be achieved in 6 to 12 months.

Funding for the development and testing of blinq™ was provided by a Small Business Innovation Research award, NEI grant 5R44EY025926, and R01EY022313. Clinical trial identifier: NCT02536963.

The Small Business Innovation Research (SBIR) program is a competitive awards-based funding mechanism that supports U.S.-based small businesses engaged in research and development that has the potential for commercialization. The NEI SBIR program specifically provides funding to companies developing technologies and innovations relating to blinding eye diseases, visual disorders preservation of sight, and addressing the special health problems and requirements of individuals with impaired vision