Salk researchers have uncovered details about stem cell growth that could help improve regenerative therapies and treatment for colon cancer. 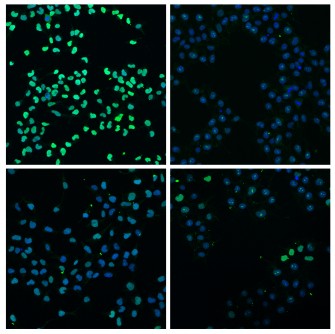 In early-stage cell nuclei (blue), developmental genes (green) must be turned on for the cell to develop. When the two cellular processes, Wnt and Activin, work together (upper left), genes are activated to a much greater degree than when neither process is active (upper right). When just a single pathway is active (Wnt, lower left, Activin, lower right), only a few genes are turned on. 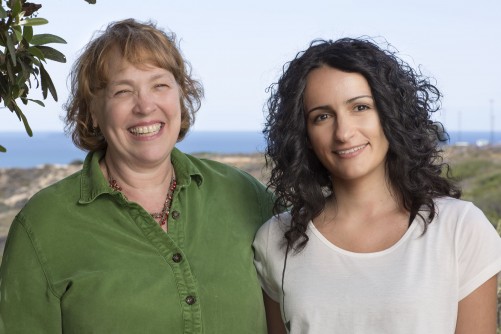 Newswise — LA JOLLA--Stem cells, which have the potential to turn into any kind of cell, offer the tantalizing possibility of generating new tissues for organ replacements, stroke victims and patients of many other diseases. Now, scientists at the Salk Institute have uncovered details about stem cell growth that could help improve regenerative therapies.

While it was known that two key cellular processes—called Wnt and Activin—were needed for stem cells to grow into specific mature cells, no one knew exactly how these pathways worked together. The details of how Wnt and Activin influence each other, published April 30, 2015 in Molecular Cell, offer guidance for improving stem cell therapies. The new work also reveals more about certain cancers that arise when these processes go astray, for example, when the Wnt signaling step becomes inappropriately reactivated, as happens in most colon cancers.

“We found that the mechanisms of these two pathways are complementary and activate the transcription, or turning on, of about 200 genes essential for stem cells to differentiate,” says Kathy Jones, senior author of the paper and a Salk professor. These genes are among the first steps that prompt stem cells to begin to change, or differentiate, into specific tissues, particularly ones that will eventually form the digestive and respiratory tracts, including intestines, lung, pancreas, thyroid and liver.

The researchers found that Wnt loads up the cellular machinery needed to begin the copying and activation of genes. Activin, meanwhile, boosts the process further: it increases the speed and efficiency by which the cellular machinery moves to copy the gene. Whereas Wnt treatment alone enhances the expression of developmental genes by a factor of 20-fold, further treatment with Activin boosts the signal to 150-fold or higher, says Jones. The team also found that the order of the signaling is equally important, because Activin could not turn on these genes unless the cells were first exposed to the Wnt signal.

“Wnt gets the ball rolling and Activin amplifies the signal,” says Conchi Estarás, first author of the paper. “This is a particularly clear example of how two different pathways, working through two different mechanisms, can cooperate to activate the same genes.” The new finding adds to a growing picture that the transcription process is much more dynamic than previous thought.

“Now we understand stem cell differentiation at a much finer level by seeing how these cellular signals transmit their effects in the cells,” adds Jones. “Understanding these details is important for developing more robust stem cell protocols and optimizing the efficiency of stem cell therapies.”

When they looked closer at the genes that both pathways activated, researchers were surprised to find that the pathways were further connected to a third process, which is known to control tissue growth and organ size. The central protein in this new pathway, called Yap, acted specifically at these genes to counteract the effects of the Activin.

“The opposing effects of Activin and Yap are exerted at a late step in transcription, the elongation phase,” says Jones. We don’t know very much about the signaling networks in normal or cancer cells specifically affect the elongation stage of transcription, so it was a real bonus to find that it is targeted by two pathways in stem cells.”

Both the Wnt and Activin signaling processes operate differently in cancer, compared to stem cells. Wnt, in particular, is turned on very early in human colon cancer in nearly 90 percent of cases. The aberrant behavior of the Activin process, meanwhile, is tied to the metastasis of many cancers.

“There is great interest in developing transcription-based inhibitors of the Wnt pathway, because these would have strong anticancer activity for many tumor types,” says Estarás. “Because the environment of stem cells and cancer cells are quite distinct, and different target genes are involved, it will be interesting to see how the synergy and regulation that we have defined in stem cells operates in the cells of a tumor.”

Authors of the work are Conchi Estarás, Chris Benner and Katherine A. Jones, all of the Salk Institute for Biological Studies.

The work was funded by the Pioneer Fund and the National Institutes for Health.

About the Salk Institute for Biological Studies:  The Salk Institute for Biological Studies is one of the world's preeminent basic research institutions, where internationally renowned faculty probes fundamental life science questions in a unique, collaborative, and creative environment. Focused both on discovery and on mentoring future generations of researchers, Salk scientists make groundbreaking contributions to our understanding of cancer, aging, Alzheimer's, diabetes and infectious diseases by studying neuroscience, genetics, cell and plant biology, and related disciplines. 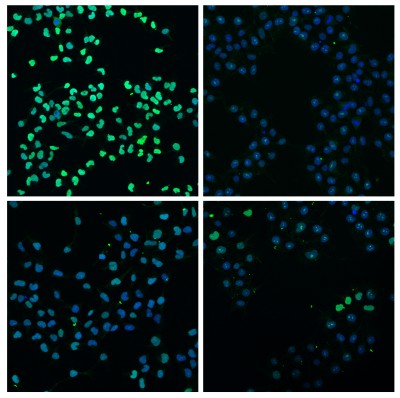 Caption: In early-stage cell nuclei (blue), developmental genes (green) must be turned on for the cell to develop. When the two cellular processes, Wnt and Activin, work together (upper left), genes are activated to a much greater degree than when neither process is active (upper right). When just a single pathway is active (Wnt, lower left, Activin, lower right), only a few genes are turned on. 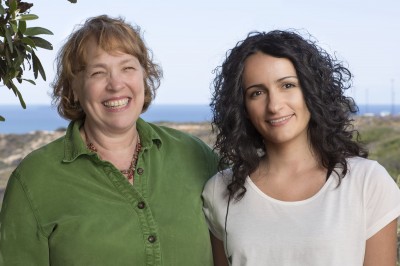