Walls of Art Tell the Story of UCLA School of Nursing

Newswise — When you enter the UCLA School of Nursing lobby, your attention is quickly drawn to three beautiful paintings adorning the walls. One depicts a small woman shaking hands with President Lyndon Johnson. The second is a hospital setting with a group of nurses and a therapy dog, and the third is of five woman on the steps in front of the iconic Royce Hall.

Painted by renowned artist Gregg Chadwick, they bring the School’s story to life in a way that engages and creates pride in the roll the School plays in the history of nursing and the history of the UCLA School of Nursing.

The Birth of a Project

Chadwick has had a long and supportive history with UCLA and the School. Two years ago, he was approached by Dean Linda Sarna with a request: would he consider creating a painting that would celebrate the School’s upcoming 70th anniversary?

They both soon realized that one picture alone would not tell the story. After perusing historical photos of the School, the agreement for one painting turned into 12, with 10 currently hanging in the School’s hallways.

Over his storied career, Chadwick often looks to historical imagery as an inspiration. “Ironically, shortly before the initial discussion with the Dean, I had gone to the UCLA Biomed Library and was looking at some of the ancient volumes they have in a locked room. One was by the early anatomist Vesalius, and they have one of the original copies from the Renaissance. And it kind of knocked my socks off. It was just housed there downstairs just beneath the nursing school.”

Deciding on the Themes

Chadwick gave his selection of themes a lot of thought before settling on one for each painting.

“I wanted images that weren’t so idiosyncratic that people would be like, ‘Huh?’” said  Chadwick.

Three of the paintings were inspired from historical photos from the School’s files.

“For example, the picture of Lulu meeting President Johnson. That was a key moment in both the history of nursing and the history of the School,” he said. “So I really, really wanted to create something around that. I painted historical figures before, but I had never tackled Johnson. So that was kind of a fun thing to be able to do.”

For several other paintings, he decided he wanted a more contemporary take on the profession. One of the paintings, of an operating theater, “The Team,” was inspired by one of the School’s distinguished alumni, Dr. Chuck Griffis, a long-time friend of Chadwick.

“I looked into Chuck’s profession as an anesthetist and wanted to create sort of an almost a dramatic image of the operating theater,” said Chadwick. “I wanted to have at least one of those images within the paintings that are in the school. And so I looked at the work of an American artist from the 19th century, Thomas Eakins, and he was a real inspiration for that piece. There are some classic paintings he did at the operating theater at that time in Philly, the University of Pennsylvania.”

“Gregg’s artistic sensitivity shows through in this wonderful painting of a nurse anesthetist providing care to a sleeping patient, said Griffis, (Ph.D. ’05).  “His message is that nurses are there for our patients – awake, asleep, in pain, in need.  We are there, watching out, caring for every breath and every heartbeat.”

Chadwick also wanted to make sure that he included images of people who look like the people who are all around us.

“We have a very diverse society and I wanted to make sure that was part of what was going on in all of the paintings.”

Each work was created through an open-ended series of painting sessions.

As Chadwick paints, surfaces are scraped down, over painted and layered with transparent pigments. Opaque swaths of color are brushed in the wet surface, leaving remnants of past figures and locations, while memories and future journeys surge to the surface and overwrite the image.

“The color in these was meant to create a draw and also a sense of pleasantness,” he said. “I picked colors that were more dreamlike to get you into a place of thinking of visions and times past.”

Nine of the 10 pieces are oil paintings on Belgian canvas and one, “Caring for Children: Listening is Key,” is a pastel.

“Often I do studies before I do paintings, and this was kind of a study to get into the project,” he said. “But when I shared it with the Dean and a few others, we all felt it was more than just a drawing – it could hold its own.

“It was a big body of work. No doubt about it. A lot of paint and a lot of brushes were sacrificed in the creation of these pictures.”

Chadwick is an UCLA alum (BA ‘81). He reminisced, “For my first art class we took our drawing materials down to the botanical garden just across from Factor, so I have history in that space.”

He had long been inspired by nurses – and is married to Dr. MarySue Heilemann, associate professor at the School. “Even before I met MarySue, I hung out with a number of nursing professionals,” Chadwick said. “I learned a lot and tried to be open to understanding what the profession entailed. When I was a student, there was a lot of controversy about closing the School, so I was aware of those issues too.”

The paintings were unveiled at a special reception prior to the 70th Anniversary Gala and the reactions were overwhelmingly positive.

“These ten paintings not only evoke different aspects of nursing and the School’s history, they enhance the environment where we work, teach, study, explore and create,” said Sarna. 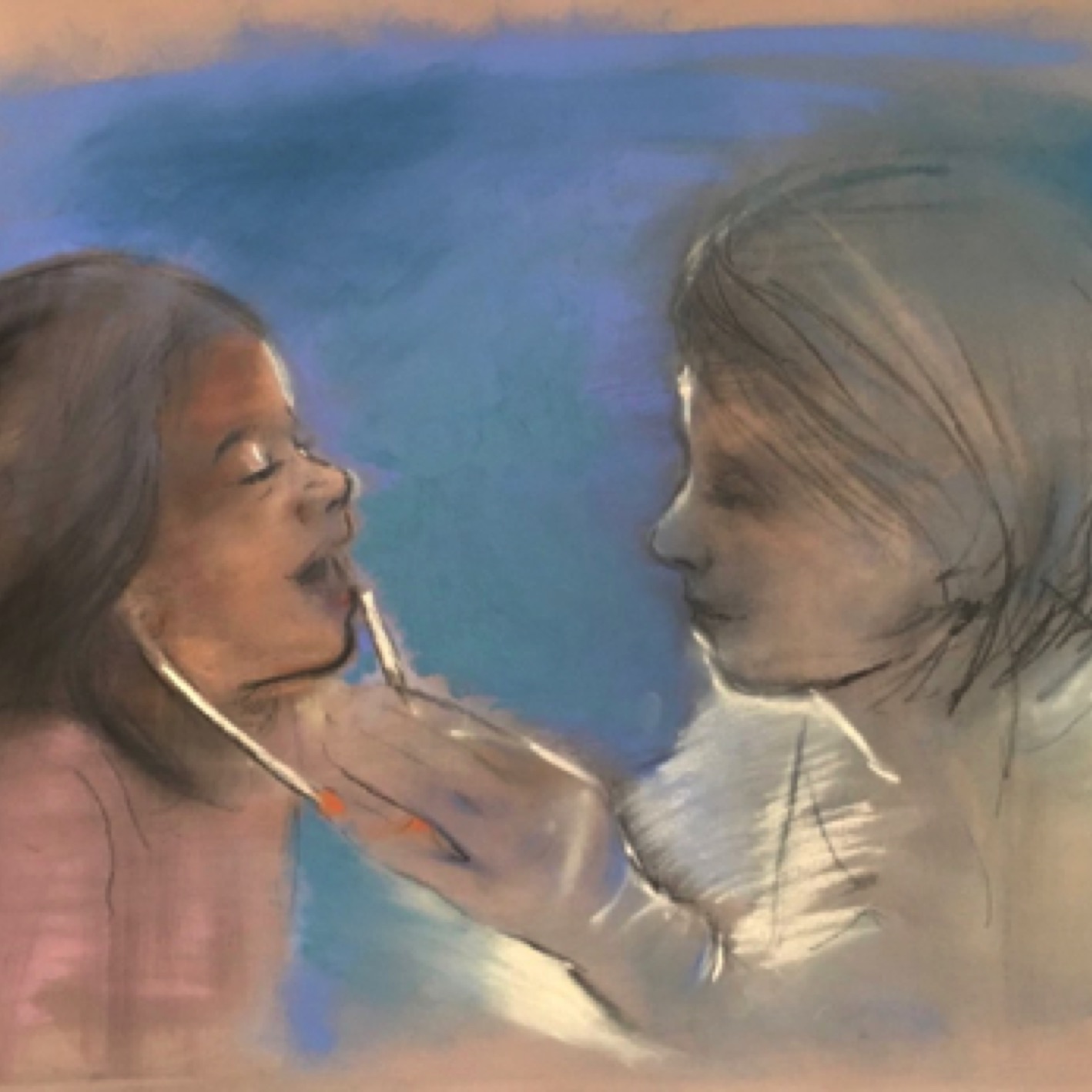 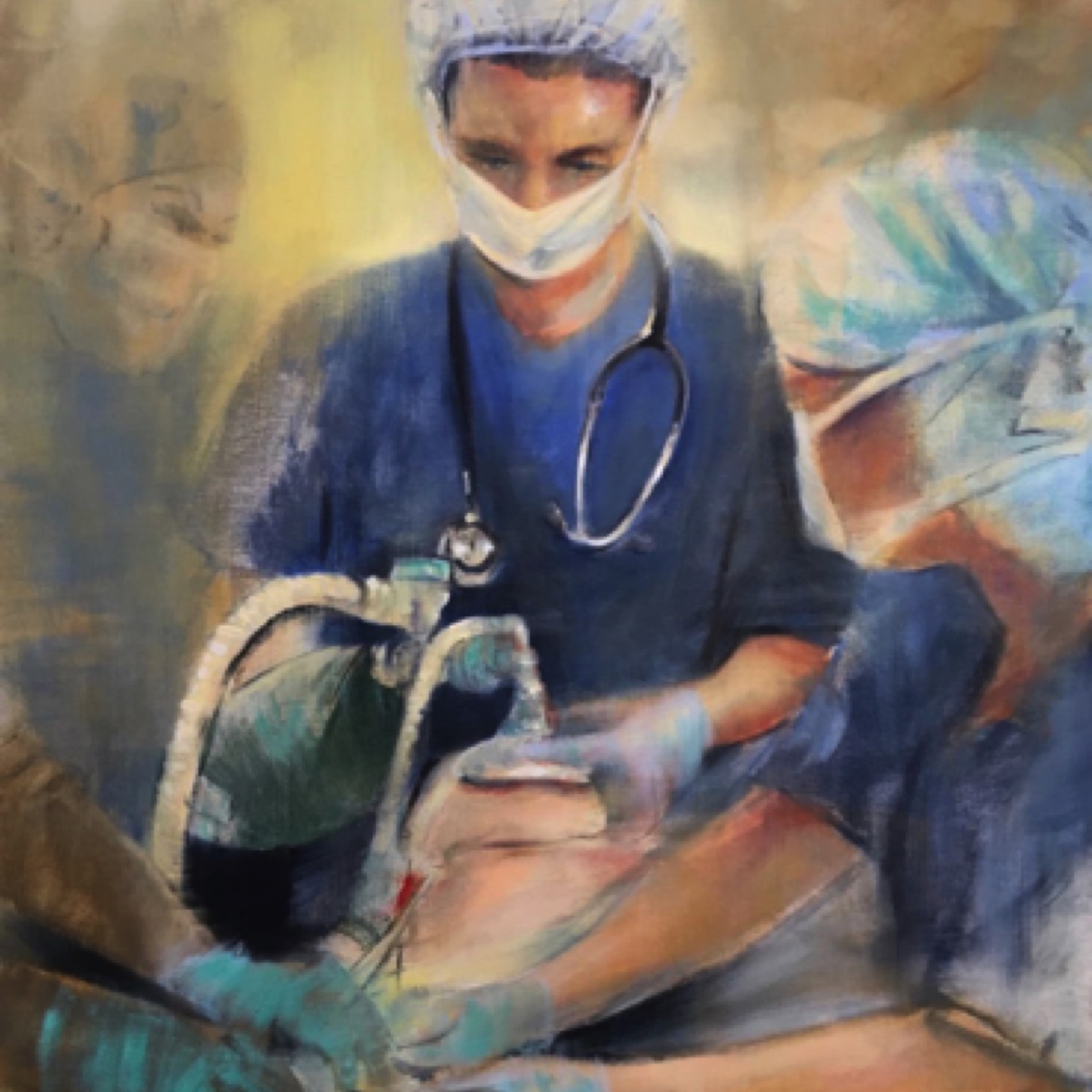