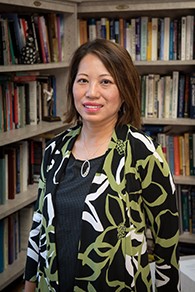 Newswise — MANHATTAN, Kan. — One of the best gifts a person could give their significant other for Valentine's Day is a discussion on boundaries regarding social media, according to a researcher at Kansas State University.

"Social media can enhance romantic relationships when it's used to stay in touch throughout the day or honor your partner's achievements, but there are pitfalls to avoid that could damage the relationship," said Joyce Baptist, associate professor of marriage and family therapy in the School of Family Studies and Human Services.

In a study of nearly 7,000 couples who use social media, Baptist found that the more accepting couples are of "boundary crossing," or communicating with someone they perceive as physically attractive, the more harmful it is to their relationship.

Baptist says there is a difference between boundary crossing and boundary violation. A crossing is when a partner brushes a proverbial guard rail, possibly by having platonic but frequent contact with another individual he or she finds attractive. Boundary violation, on the other hand, may be emotional or physical infidelity, Baptist says.

Without a discussion, each person in the relationship might have a different view of what is and is not acceptable, according to Baptist.

"Couples should be on the lookout for boundary crossing and discuss when a crossed boundary becomes a violation," Baptist said. "It's an important conversation for couples to have as a preventative measure."

Baptist's research showed that while some people accepted the fact that their partners interacted with old flames or flirted with others online, their resignation to the situation was not indicative of relationship satisfaction.

"Although they may say, 'I trust you and it's OK,' they are not happy about it," Baptist said. "They eventually perceive that their significant other is spending too much time connecting with others on social media rather than paying attention to their own partner."

Baptist says these situations decrease relationship satisfaction and levels of care that people receive from their significant other.

According to Baptist, the foundational problem is a lack of agreement regarding boundaries on social media. She says couples ought to share not only what they are willing to tolerate but also what they would prefer so the couple can create a secure and satisfying relationship.

"When you come across an old flame or another attractive person on social media, the question to ask is: Will communicating with this other person enhance my relationship or harm it?" Baptist said. "Just because you see that your girlfriend or boyfriend from high school is on Facebook doesn't mean that you need to 'friend' them."

Keeping lines of communication open with former significant others can become a slippery slope, according to Baptist, because relationships naturally have peaks and valleys. During a relationship's lower points, a person may be tempted to confide in a previous partner.

"Ebbs and flows do not mean the relationship is heading down the drain, but reigniting an old flame could destroy it," Baptist said. "My best advice is that if you are serious about your relationship, cut off those ties."