Want to Improve Memory? Strengthen Your Synapses. Here's How 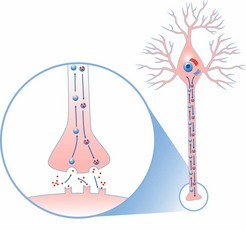 Electrical signals move from the cell (above right) along the axon to the synapse (detail at left), where they are relayed across the synaptic cleft to neighboring cells in the form of chemicals called neruotransmitters.

A sharp mind and strong memory depend on the vitality of your brain's network of interconnecting neurons, and especially on junctions between these neurons called synapses. Since many of the brain changes that accompany aging and mental disorders are associated with deterioration or loss of synapses, learning ways to strengthen and protect these important connections may help you delay or avoid cognitive decline.

These findings appear in the February issue of Mind, Mood and Memory, a newsletter from Massachusetts General Hospital, a leading center of excellence in the field of cognitive fitness. (For more information click on http://www.mindmoodandmemory.com.)

The synapse is the point of communication between one neuron and a neighboring neuron, muscle cell or gland cell. It is the site where virtually all important brain activity emerges. At this gap between the message-relaying axon of one brain cell and the message-receiving dendrites of its neighbor, chemicals called neurotransmitters are released and absorbed in a process of information transmission that spreads throughout extensive networks of cells.

There are trillions of synapses in the brain: Each one of our more than 100 billion neurons may be connected to hundreds of other cells by as many as 10,000 synapses. Together they form a complex and flexible instrument upon which the music of our thoughts, behaviors and feelings is played out.

Research has established that, among its many functions, the synapse plays an important role in learning and memory. New information is absorbed and retained through a process characterized by changes in synaptic interconnections among neurons in the hippocampus and cerebral cortex, regions of the brain associated with memory. But the ability to learn and remember, along with other mental and emotional processes, can be influenced by the effects of lifestyle and environment on the synapses. Studies suggest that neurons that are adversely affected by factors such as stress, lack of stimulation, or neurotoxins may be hampered in their ability to form new patterns of connectivity and may lose synaptic connections. "Psychiatry essentially deals with brain issues that transpire at the synaptic level and at connections between neurons in different brain regions," says Eric M. Morrow, MD, PhD, Instructor in Psychiatry at Harvard Medical School and a researcher in neuroscience and genetics at Massachusetts General Hospital. "Most medications that have been developed to treat mood and other neuropsychiatric disorders work at this level. In psychiatry, the emphasis is generally on problems and benefits that come from the functioning of the brain's synapses and chemicals, whereas treatment for lesions of the brain such as those associated with stroke or brain injury is done by neurologists.

"Researchers are developing ways to study neurotransmitters in the synapse to measure their effects on brain plasticity (ability to change in response to experience), learning and memory, and to discover their association with disorders such as mild cognitive impairment (MCI), Alzheimer's disease and depression," he adds. "While the associated symptoms of mental health are not subtle, visualizing the functioning brain at the level of the synapse is difficult. This is a very challenging but important problem. New tools are on the way that may one day help scientists develop a deeper understanding of synaptic function."

How the synapse functionsNeurons send and receive messages using their single axon—a tubular filament that conducts electrical signals away from the cell—and dendrites—projections with a tree-like structure that receive signals from other cells across a synapse. When one cell communicates with another, it sends a wave of electrical activity down its axon to one of a cluster of presynaptic terminals—branches at the end of the axon that are positioned close to a neighboring cell's dendrites.

In most cell communication, once a signal reaches the presynaptic terminal, the nerve impulse is transformed into a message composed of one or more neurotransmitters. These neurotransmitters are then released into a gap called the synaptic cleft, where they relay their message by binding with receptors on the post-synaptic membrane of the neighboring cell.

It is generally agreed that learning occurs when the acquisition of new information causes synaptic changes, but scientists are not yet certain precisely how these changes come about. Several theories have been proposed. In one, called the Hebbian theory, it is thought that any two cells or systems of cells that are repeatedly activated at the same time will tend to become "associated," so that activity in one makes it more likely the other will become active. Repeated co-activation of connected cells is thought to make physical changes in the brain—such as the development of new synapses between neurons or more receptors in the post-synaptic membrane—that lead to a lasting memory.

Another theory ascribes learning to the strengthening of existing synapses. It is thought that the developing brain overproduces synapses early in life. Subsequently experience, by activating certain nerve cells repeatedly and ignoring others, determines which synapses become mature and stable and which ones wither away in a process of synaptic pruning. Over time, this process leaves us with only highly functional synapses. Learning and memory are thought to result when repeated stimulation of sets of neurons causes the communication across synapses to be strengthened, a condition called long-term potentiation.

Keeping synapses healthyMaintaining brain cells and synapses in good condition is critical, since mental performance is totally reliant on the health of the brain's complex network of trillions of synapses. Deterioration or loss of synapses can result in changes in mood and cognition, and in alterations of brain functioning such as those associated with neurological disorders or aging.

Stress is a major cause of synapse dysfunction.. Research shows that prolonged exposure to stress can interfere with the function of neurotransmitters. Excessive amounts of the excitatory neurotransmitter glutamate may accumulate in the synapse. In high concentrations, glutamate becomes a toxin that can interfere with learning and cause cell damage in the brain's memory regions. Research presented at the 2006 American Psychological Association convention suggests that repeated stress remodels the brain and causes neurons in the hippocampus and prefrontal cortex to shrink. Stress can also lead to depression, which is associated with memory difficulties.

A number of studies suggest that lack of stimulation is associated with a reduced number of synaptic connections in the brain, a factor that may increase vulnerability to Alzheimer's disease (AD). For example, scientists who used an electron microscope to compare post-mortem brain tissue from the prefrontal cortex of 16 subjects found that those whose professions required greater amounts of skill or education had 17 percent more synapses for each neuron than those with less education. Another study suggests that seniors who enjoy a variety of intellectually challenging activities (such as playing a musical instrument, solving puzzles or reading) have a lower risk of developing dementia. It is thought that the larger number of neuronal interconnections associated with regular intellectual activity may provide extra insurance against cognitive decline. The synapses are vulnerable to neurotoxins, as well. Excessive alcohol consumption, exposure to certain pesticides and heavy metals, and to drugs such as phencyclidine (PCP) and ketamine can cause memory problems and synaptic loss. The toxin from the bacteria that causes poisonous botulism acts directly on the synapses by blocking transmission of neurotransmitters, as does the deadly toxin curare.

Following these tips may help you keep your mind active and alert by protecting and strengthening your synapses: