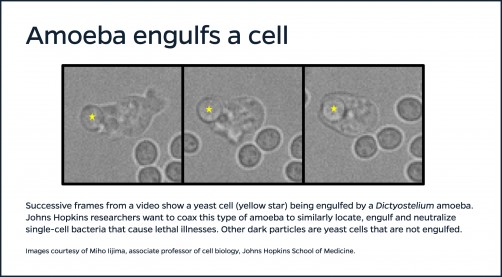 An amoeba engulfs a yeast cell, in a manner similar to attacks on dangerous single-cell bacteria that Johns Hopkins researchers are attempting to incite.

Newswise — Drawing on their expertise in control systems and cell biology, Johns Hopkins University researchers are setting out to design and test troops of self-directed microscopic warriors that can locate and neutralize dangerous strains of bacteria.

A five-member team from the university’s Whiting School of Engineering and its School of Medicine recently received a four-year $5.7-million federal contract to devise a prototype biocontrol system that can dispatch single-cell fighters to track down and engulf specific pathogens, rendering them harmless. The funding was awarded by the Defense Advanced Research Projects Agency, commonly called DARPA.

Possible first targets in this proof-of-concept project include Legionella, the bacteria that cause Legionnaire’s disease, and Pseudomonas aeruginosa, a bacterial strain that is the second-leading cause of infections found in hospitals. If the project succeeds, these tiny infection-fighters might one day be dispatched to curtail lethal microbes lurking in medical settings. Eventually, they could also be used to cleanse contaminated soil or possibly defend against bioterror attacks.

An important goal of the project is that each of the proposed soldier cells must carry out its own mission without relying on step-by-step commands from a remote human operator.

“Once you set up this biocontrol system inside a cell, it has to do its job autonomously, sort of like a self-driving car,” said Pablo A. Iglesias, principal investigator on the project. Iglesias, the Edward J. Schaefer Professor of Electrical & Computer Engineering in the Whiting School, shifted his research focus from man-made to biological control systems about 15 years ago.

“Think about how the cruise control in your car senses your speed and accelerates or slows down to stay at the pace you’ve requested,” Iglesias said. “In a similar way, the biocontrol systems we’re developing must be able to sense where the pathogens are, move their cells toward the bacterial targets and then engulf them to prevent infections among people who might otherwise be exposed to the harmful microbes. To develop the bio-circuitry needed for these tasks, Iglesias teamed up with four School of Medicine cell biology and biological chemistry experts who are co-investigators. These experts plan to biologically embed search-and-surround orders within a familiar type of amoeba cell called Dictyostelium discoideum. These widely studied microbes, commonly found in damp soil such as riverbeds, typically engulf and dine on bacteria, which are much smaller.

“These amoebas possess receptors that can detect the biochemical ‘scents’ emitted by bacteria,” said Douglas N. Robinson, a professor in the School of Medicine’s Department of Cell Biology and a co-investigator on the DARPA project. “Our goal is to use concepts from control theory to design a ‘super amoeba’ that can recognize a particular bad guy—a specific type of disease-causing bacteria—and then move toward and attack these target cells.”

Robinson added, “The plan is to develop amoebas that are super-sensitive to these bacterial signals and home in on them as though they were a plate piled high with fresh chocolate chip cookies. The goal is to make these amoebas behave as though this is the most natural thing to do.”

These bioengineering experiments are required to operate under strict safety and ethics rules, he said, including those related to the environmental release of engineered organisms. But if the project is successful, the researchers say the single-cell fighters could eventually be introduced into the cooling and ventilation system in a hospital, where they could feast on the bacteria that are currently causing dangerous infections. One possible method of introducing the infection fighters into such systems might be through use of a spray solution.

Principal investigator Iglesias noted that initial efforts will focus on bacteria lurking outside, not within the body. “In this contract, we are not targeting bacteria in human blood,” he said, “but the hope is that the techniques we develop would ultimately be useful for that.”