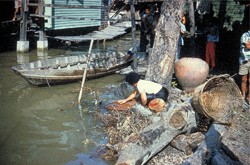 A woman leans over a source of water that is potentially contaminated with cholera bacteria.

Newswise — BOSTON (September 2, 2014) — In the battle between our immune systems and cholera bacteria, humans may have an unknown ally in bacteria-killing viruses known as phages. In a new study, researchers from Tufts University, Massachusetts General Hospital, Partners In Health, Haiti’s National Public Health Laboratory, and elsewhere, report that phages can force cholera bacteria to give up their virulence in order to survive. Importantly, the study — published in eLife — found that cholera’s mutational escape from phage predation occurs during human infection.

First author Kimberley Seed, Ph.D., and corresponding author Andrew Camilli, Ph.D., both of Tufts University School of Medicine, and their co-authors analyzed phage resistance properties and DNA sequences of cholera bacteria taken from phage-positive stool samples from patients with cholera in Haiti and Bangladesh, two countries where cholera outbreaks are common at present.

“This is the first time we have seen cholera bacteria defend themselves from phages while infecting humans. This suggests that these phages are actively working in our favor, first by killing cholera bacteria within the patient, and second, by genetically weakening the bacteria that are shed by the infected patient such that they are less fit to survive in the environment or less able to cause infection in other people,” said senior author Andrew Camilli, a Howard Hughes Medical Institute investigator, professor of molecular biology & microbiology at Tufts University School of Medicine, and member of the Molecular Microbiology program faculty at the Sackler School of Graduate Biomedical Sciences at Tufts University.

“This important finding suggests that we may be able to leverage the strength of phages for treating people with cholera or perhaps preventing cholera in people who may have been recently exposed as an alternative to antibiotics,” he continued.

“Seeing this rapid evolutionary change in the cholera bacteria occurring during human infection suggests that the phages are posing a very strong threat. And to observe this in two different continents suggests that this is not a one-time find, but that it may be happening consistently during cholera outbreaks,” said first author Seed, now assistant professor of molecular, cellular and developmental biology at University of Michigan. “Additionally, virtually all bacteria can be infected by phages, which are found wherever bacteria are. So this finding with cholera may be the start of a broader understanding of how phages and bacteria evolve.”

Previous work by Camilli and Seed, published last year in Nature, provided the first evidence that a phage could acquire a wholly functional and adaptive immune system. They observed that the phage could use this acquired immune system to disarm a phage defense system of the cholera bacteria, allowing the phage to ultimately destroy its bacterial host. This study bolstered the concept of using phage to prevent or treat bacterial infections, and extended the idea that phages can be extremely sophisticated bacterial predators. The team is now investigating the details of this particular arms race between phage and bacteria in hopes of better understanding how phage influence cholera outbreaks and how we can further leverage phages to treat or prevent infections.

The World Health Organization reports that there are an estimated three-to five million cases of cholera cases and 100,000 to 120,000 deaths due to cholera each year. This summer, at least 67 people in Ghana have died of cholera while 6,000 others have been infected. In northern Cameroon, there are reports that 200 people have died and many more infected in the last few months. A current outbreak in South Sudan has taken 130 lives out of a total of more than 5,800 cases. In Haiti, since the beginning of the epidemic there (October 2010) and through March of this year, more than 8,500 people have died, out of more than 700,000 reported cases.

Additional authors are Minmin Yen, a Ph.D. student in the Molecular Microbiology program at the Sackler School of Graduate Biomedical Sciences; B. Jesse Shapiro, Ph.D., assistant professor of biology and chair of the Microbial Evolutionary Genomics lab at the Université de Montréal; Isabelle J. Hilaire, M.P.H., of Partners In Health; Richelle C. Charles, M.D., an assistant physician in the Division of Infectious Diseases at Massachusetts General Hospital, and assistant professor of medicine at Harvard Medical School; Jessica E. Teng, M.P.H., of Partners In Health and a research assistant in the Division of Global Health Equity at Brigham and Women’s Hospital; Louise Ivers, M.D. M.P.H., DTM&H, of Partners In Health, associate physician in the Division of Global Health Equity at Brigham and Women’s Hospital, and associate professor of medicine and of global health at Harvard Medical School; Jacques Boncy, M.D., director of Haiti’s National Public Health Laboratory (Laboratoire National de Santé Publique), the reference laboratory center of Haiti’s Ministry of Public Health and Population (Ministère de la Santé Publique et de la Population or MSPP), and professor of microbiology and laboratory medicine at the University of Haiti; and Jason Harris, M.D., an associate pediatrician and member of the pediatric infectious disease division at Massachusetts General Hospital, as well as an associate professor of pediatrics at Harvard Medical School.

Research reported in this publication was supported by the National Institute of Allergy and Infectious Diseases (NIAID) of the National Institutes of Health (NIH) under award number R01AI055058, as well as the Natural Sciences and Engineering Research Council of Canada and the Canada Research Chairs program via award number 950-228996. Kimberley Seed was also supported by the Charles A. King Trust Postdoctoral Research Fellowship Program. Additional funding was provided by the NIAID under award numbers R01AI099243 and K08AI089721.

For more information, read The DNA Thief, or New Study Shows Viruses Can Have Immune Systems.