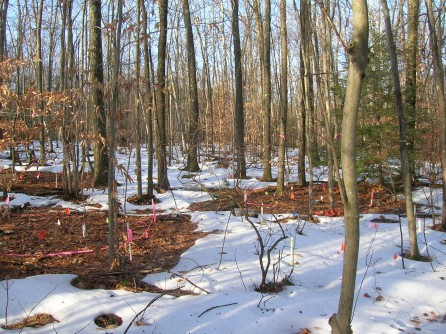 Research sites at the Harvard Forest Long-Term Ecological Research site in Petersham, Mass., where Frey and Melillo have been warming two sites with underground cables. The photo was taken during a January thaw on a 50-degree day; the heated plots, which had been snow-covered, melted before the unheated ones. 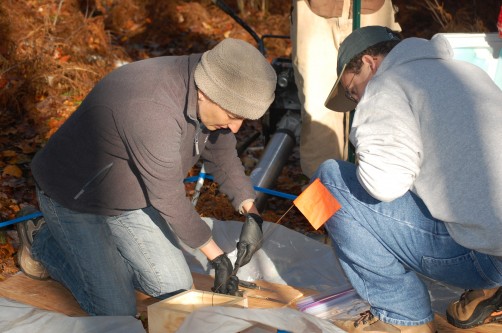 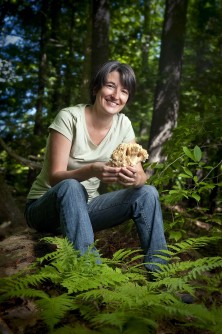 Serita Frey, professor of natural resources at the University of New Hampshire

Warmer Soils Release Additional CO2 into Atmosphere; Effect Stabilizes Over Longer Term Newswise — DURHAM, N.H. -- Warmer temperatures due to climate change could cause soils to release additional carbon into the atmosphere, thereby enhancing climate change – but that effect diminishes over the long term, finds a new study in the journal Nature Climate Change. The study, from University of New Hampshire professor Serita Frey and co-authors from the University of California-Davis and the Marine Biological Laboratory, sheds new light on how soil microorganisms respond to temperature and could improve predictions of how climate warming will affect the carbon dioxide flux from soils.

Frey and co-authors Johan Six and Juhwan Lee of UC-Davis and Jerry Melillo of the Marine Biological Laboratory were curious how increased temperatures due to climate change might alter the amount of carbon released from soils. “While they’re low on the charisma scale, soil microorganisms are so critically important to the carbon balance of the atmosphere,” Frey says. “If we warm the soil due to climate warming, are we going to fundamentally alter the flux of carbon into the atmosphere in a way that is going to feed back to enhance climate change?”

Yes, the researchers found. And no.

The study examined the efficiency of soil organisms – how completely they utilize food sources to maintain their cellular machinery – depending upon the food source and the temperature under two different scenarios. In the first short-term scenario, these researchers found that warming temperatures had little effect on soils’ ability to use glucose, a simple food source released from the roots of plants. For phenol, a more complex food source common in decomposing wood or leaves, soils showed a 60 percent drop in efficiency at higher temperatures.

That effect diminishes, however, in the second scenario, in which soils were warmed to 5 degrees Celsius above the ambient temperature for 18 years. “When the soil was heated to simulate climate warming, we saw a change in the community to be more efficient in the longer term,” Frey says, lessening the amount of carbon dioxide the soils release into the atmosphere and, in turn, their impact on the climate. “The positive feedback response may not be as strong as we originally predicted.”

The research team also examined how changes in soil microorganism efficiency might influence long term storage of carbon in soils as predicted by a commonly used ecosystem model. Models of this type are used to simulate ecosystem carbon dynamics in response to different perturbations, such as land-use change and climate warming. These models generally assume that efficiency is fixed and that it does not change with temperature or other environmental conditions. The team found a large effect on long-term soil carbon storage as predicted by the model when they varied carbon use efficiency in a fashion comparable to what they observed in their experiments. “There is clearly a need for new models that incorporate an efficiency parameter that is allowed to fluctuate in response to temperature and other environmental variables,” Six says. The researchers hypothesize that long-term warming may change the community of soil microorganisms so that it becomes more efficient. Organism adaptation, change in the species that comprise the soils, and/or changes in the availability of various nutrients could result in this increased efficiency.

This study was based on work done at the Harvard Forest Long-Term Ecological Research site in Petersham, Mass., where Frey and Melillo have been warming two sites – one 9 meters square, the other 36 meters square -- with underground cables for two versus 18 years. “It’s like having a heating blanket under the forest floor,” Frey says, “allowing us to examine how this particular environmental change—long-term soil warming—is altering how the soil functions.”

The article, “The Temperature Response of Soil Microbial Efficiency and its Feedback to Climate,” is published in the advanced online publication of Nature Climate Change on Jan. 20, 2013. To access the abstract or full text (subscribers only) of the article after the embargo lifts, use the digital object identifier (DOI) number 10.1038/NCLIMATE1796 at this link: http://dx.doi.org/.

http://www.unh.edu/news/releases/2013/jan/forestplot.jpgCaption: Research sites at the Harvard Forest Long-Term Ecological Research site in Petersham, Mass., where Frey and Melillo have been warming two sites with underground cables. The photo was taken during a January thaw on a 50-degree day; the heated plots, which had been snow-covered, melted before the unheated ones.Credit: Alix Contosa, postdoctoral researcher at UNH