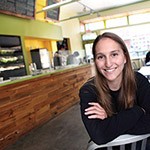 This is not the case, however, at Washington University in St. Louis, where more than 40 percent of successful companies started by recent graduates through the university’s business entrepreneurship courses have been founded by women.

“I think a lot the university’s success with female entrepreneurs begins with admissions,” says Clifford Holekamp, senior lecturer in entrepreneurship at Olin Business School. “When you admit ambitious, confident young people, they tend to do great things, whether they are male or female.”

- The Migrant and Immigrant Community Action Project (MICA) – Founded by Nicole Corté, who earned a master’s degree in social work from the Brown School and a Juris Doctorate from the School of Law in May 2012; and Jessica Mayo, who earned a Juris Doctorate in May 2012, the organization works with low-income immigrants to overcome barriers to justice. - The Green Bean restaurant – Founded by Sarah Haselkorn, who earned a bachelor’s of science in systems science and engineering from the School of Engineering & Applied Science in May 2013, the Central West End restaurant features locally sourced food and sustainable materials. - Liberal Diagnostics Center – Founded by Amber Ansari, who earned an MBA from Olin Business School in May 2013. Ansari founded and managed the initial operations of the facility in Liberal, Kan., while attending the full-time MBA program in St. Louis. - Farmplicity – Co-founded by Lauren Ortwein, who earned a BSBA from Olin Business School in May 2013; and senior Jolijt Tamanaha, majoring in political science in Arts & Sciences, Farmplicity makes it easier for restaurants to order locally grown food. - myEDmatch – founded by Alicia Herald, who earned an EMBA degree in 2011, the company matches educators with jobs to find the best fit for both the school and the employee. - Sparo Labs – Co-founded by Abigail Cohen, who earned a bachelor’s degree in biomedical engineering in May 2013, Sparo Labs is developing a low-cost spirometer, a device which measures lung function, aimed a helping people in developing countries.

“Washington University turns that assumption on its head,” she says. “The university has created an environment that allows women to build their businesses with the tools and skills needed to make calculated decisions to eliminate that risk. The result is that most of my entrepreneurship classes, clubs and events have a strong female presence. We’re a passionate and driven community and we don’t want to work in a cubicle all our lives. Entrepreneurship gives us that freedom and the university gives us the tools to get there.”

Washington University helps nurture and fuel student entrepreneurship through a variety of programming and support, including the Olin Cup, the YouthBridge Social Entrepreneurship and Innovation Competition (YSEIC), the Discovery Competition in the School of Engineering & Applied Science, The Hatchery course, the Skandalaris Center for Entrepreneurial Studies and a partnership with St. Louis startup hub T-REx.

“There has been a general culture shift in the Washington University community over the last 10 to 15 years that founding a business after graduation is a viable and advisable option,” says Holekamp, who co-teaches The Hatchery, one of the university’s capstone entrepreneurship courses.

The recent national attention focused on St. Louis as an entrepreneurship hub has certainly helped.

“There is not doubt that the student community is inspired by the St. Louis startup community,” Holekamp says. “We are engaging our students in the St. Louis scene, and that becomes infectious. Students want to stay here and grow their businesses. Getting them exposed to the field takes away some of the veil of mystery of being an entrepreneur, making it less intimidating.”

Opportunities abound for both men and women.

“There are amazing resources here if you take advantage of them, and you should, because you’re only here for four years,” says Haselkorn, founder of Green Bean. “It’s important to find the right people to reach out to who can help you.”

Entrepreneur magazine has ranked Washington University No. 5 in undergraduate programs and No. 6 in graduate programs. Degrees in entrepreneurship are offered at the undergraduate and graduate level in the business school; WUSTL’s Brown School offers a master’s degree in social entrepreneurship in conjunction with Olin Business School. A minor degree in entrepreneurship is an option for all undergraduates at WUSTL. The Skandalaris Center for Entrepreneurial Studies manages two annual business plan competitions: the Olin Cup for commercial ventures and the YouthBridge Social Enterprise and Innovation Competition. The School of Engineering and & Applied Science launched its Discovery Competition last fall with the goal of promoting new and innovative solutions for real-world problems and allowing students to compete for financial resources that could help turn their ideas into businesses. The winning team was awarded $25,000.