Watch on Live Camera As a Baby Albatross Grows Up 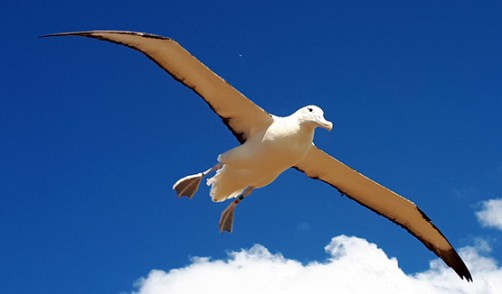 Newswise — Otago, New Zealand & Ithaca, New York—Millions of people from around the world can now witness a rare sight in real time: a Northern Royal Albatross pair nesting and raising their chick. The live views originate from a coastal albatross colony in Otago, on South Island, New Zealand, and are made possible by a new partnership between the country's Department of Conservation (DOC) and the Cornell Lab of Ornithology.   The Cornell Lab's Bird Cams website now carries the popular Royal Cam which will continue to be hosted by DOC on a windy hilltop near the ocean. Viewers will see a 21 year old male bird (identified as OGK, with orange, green, and black leg bands) and a 25 year old female (YRK, with yellow, red, and black bands). YRK laid her egg on November 14. Look for hatching to begin on the live cam in late January and early February. Chicks usually fledge in September and will remain at sea for several years before returning to the breeding grounds. By any measure, this is an impressive species. It is one of the largest albatrosses in the world, with a wingspan of nine feet. It is also highly endangered and breeds only in New Zealand. The Bird Cams website is visited by millions of viewers each year and offers an opportunity for people to learn more about the Northern Royal Albatross—called Toroa in the native Maori language.

"A record number of 28 albatross chicks fledged at the colony this year, and a new generation of chicks will soon be hatching," says DOC biodiversity ranger Sharyn Broni. "Being featured on the Cornell Lab’s Bird Cams site will significantly increase the exposure of the species to a worldwide audience and help people understand the threats these birds face once they leave the relative safety of the colony."   Charles Eldermire leads the Cornell Lab’s global Bird Cams project and has been watching the Royal Cam since its launch in 2016. He approached DOC to suggest bringing the Royal Cam to the world stage.   "Seabirds like the Northern Royal Albatross face so many of the conservation issues we worry about today, such as climate change, invasive species, and habitat loss," says Eldermire. "Toroa are an incredible agent for opening hearts and minds to the challenges seabirds are facing globally. The distances these birds travel, crossing entire oceans and bypassing borders, makes them a powerful symbol for how wild birds connect us all."   The Cornell Lab has upgraded DOC's Royal Cam so it can now pan the nesting site and use night vision, which does not disturb the birds in any way.   "We’re excited to see what albatross get up to in the evenings. Night vision also gives our international audience the ability to tune in at any time of the day, when previously they would miss out on much of the albatross action due to different time zones," says Sharyn Broni.   If the Royal Cam proves to be a hit with the Cornell Lab’s viewers, there’s potential for other New Zealand species to get the same attention. New Zealand is home to a quarter of the world’s population of seabirds.

Editors: Download images and video. The use of this material is protected by copyright. Use is permitted only within stories about the content of this release. Redistribution or any other use is prohibited without express written permission of the New Zealand Department of Conservation (contact below).