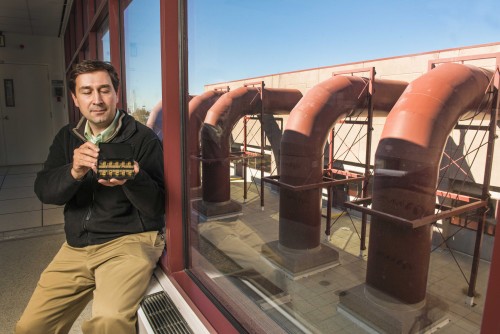 Sandia National Laboratories researcher Murat Okandan holds one of the microscale actuators that could lead to better understanding of brain function, which could help with prevention, diagnostic and treatment techniques for brain disorders.

Newswise — ALBUQUERQUE, N.M. — They are with us every moment of every day, controlling every action we make, from the breath we breathe to the words we speak, and yet there is still a lot we don’t know about the cells that make up our nervous systems. When things go awry and nerve cells don’t communicate as they should, the consequences can be devastating. Speech can be slurred, muscles stop working on command and memories can be lost forever.

Better understanding of how neurons and brains work could lead to new prevention, diagnostic and treatment techniques, but the brain is complex and difficult to study. If you were to hold your brain, you would likely marvel at how much it feels and moves like Jell-O. This tissue is composed of neurons and other supporting cells with tiny cell bodies, which generate electrical signals that determine how the brain and the nervous system function.

Those signals can be recorded and measured if a suitably small electrode is in the vicinity, but that presents challenges. Brain tissue is always moving in response to the body’s movement and breathing patterns. In addition, the nerve tissue is incredibly sensitive. If disrupted by a foreign body, the cells trigger an immune response to encapsulate the intruder and barricade it from the electrical signal it’s trying to capture and understand.

That challenge led Jit Muthuswamy, an associate professor of biomedical engineering at Arizona State University, Tempe (ASU), to pursue a robotic electrode system that would seek and maintain contact with neurons of interest autonomously in a subject going through normal behavioral routines. That led him to Sandia National Laboratories.

“We are working to develop chronic, reliable, intelligent neural interfaces that will communicate with single neurons in a variety of applications, some of which are emerging and others that are closer to market,” Muthuswamy said. “Applications like brain prostheses are critically dependent on us being able to interface and communicate with single neurons reliably over the course of a patient’s life. Such reliable neural interfaces are also critical to help us understand the dynamic changes in the wiring diagram of the brain.”

Key to the success of that robotic approach are the microscale actuators needed to reposition the electrodes. This led Muthuswamy in 2000 to seek out Sandia engineer Murat Okandan and the unique microsystems engineering capabilities available at Sandia’s Microsystems and Engineering Sciences Applications facility.

“The process flow we use to make these isn’t available anywhere else in the world, so the level of complexity and mechanical design space we had to design and fabricate these was immensely larger than what other researchers might have,” Okandan said. He has been working with Muthuswamy’s research team since that initial contact to find a suitable method to track individual neurons as they fire.

Earlier probes were made of a sharpened metal wire inserted in the tissue. The closer the probe is to the neuron, the stronger the signal, so experimenters ideally try to get as close as possible without disrupting surrounding tissue. The problem is that even a thin wire is too big; such a probe can take measurements around the neuron, but is far too cumbersome to be reliable over time.

Equally important is capturing the signals from an awake animal. Given their size and rigidity, current probes aren’t suited to gather recordings as the animal responds to its environment. Those units aren’t self-contained, so they keep the animals from moving around freely.

Microscale actuators and microelectrodes are critical to addressing both of those issues so probes can interact with individual nerve cells while doing minimal damage to surrounding tissue. The microscale actuators and associated packaging system developed at ASU and Sandia let a probe move autonomously in and out of the areas surrounding the cell, collecting measurements while compensating for any movement in the neuron or brain tissue.

About the size of a thumbnail, the self-contained unit has three microelectrodes and associated micro actuators. When a current runs through the thermal actuator, it expands and pushes the microelectrodes outward over the edge of the unit, which is flat to fit against the tissue. Because the actuator is so small, it can be heated to several hundred degrees Celsius and cooled again 1,000 times per second. It takes 540 cycles to fully extend the probe, but that can be done quickly – in a second or less.

The probes were implanted in the somatosensory cortex of rodents and rigorously tested in numerous experiments, both in acute and long-term conditions, Muthuswamy said. Animal procedures were carried out with the approval of ASU’s Institute of Animal Care and Use Committee, and experiments were done in accordance with National Institute of Health guidelines.

Muthuswamy said the neural probes demonstrated significant improvement in the quality and reliability of the signals when the probes were moved with precision using the Sandia microactuators in response to loss of neural signals. Further, he said, adding autonomous closed-loop controls to compensate for microscale perturbations in brain tissue significantly improved the stability of neural recordings from the brain.

Scale of this system is unique

Thermal actuators have been used for years at Sandia and elsewhere, but the scale of this system is unique. “The idea that we could build this system to achieve multiple millimeters of total displacement out of a micron-scaled device was a significant milestone,” said Sandia engineer Michael Baker, who designed the actuator. “We used electrostatic actuators in the past, but the thermal actuator provides much higher force, which is needed to move the probe in tissue.”

The microelectrodes are made of highly conductive polysilicon, which the team discovered has a number of advantages. It is almost metal-like in its conductivity, but durable enough for millions of cycles. It provides a signal-to-noise ratio much greater than previous wire probes and provides high-quality measurement signals.

Muthuswamy and Okandan currently are seeking to produce richer data with resolution in the submicron range to be able to go inside cells and take measurements there. They also are working on stacking the existing neural probe chips and decreasing the spaces between probes. Muthuswamy’s Neural Microsystems lab at ASU has developed a unique stacking approach for creating three-dimensional arrays of actuated microelectrodes.