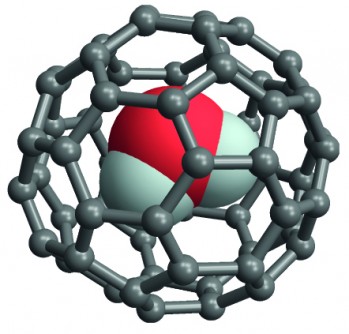 Newswise — WASHINGTON D.C. May 20, 2014 -- In a new paper in The Journal of Chemical Physics, produced by AIP Publishing, a research team in the United Kingdom and the United States describes how water molecules "caged" in fullerene spheres ("buckyballs") are providing a deeper insight into spin isomers -- varieties of a molecule that differ in their nuclear spin. The results of this work may one day help enhance the analytical and diagnostic power of nuclear magnetic resonance (NMR) and magnetic resonance imaging (MRI).

Water molecules can exist as one of two isomers depending on how the spins of their two hydrogen atoms are oriented: ortho, where the spins are parallel and have a spin number of 1, and para, where the spins are antiparallel and have a spin number of 0. Scientists believe that any given molecule can transform from ortho- into para- spin states and vice versa, a process known as nuclear spin conversion.

"Currently, mechanisms for this conversion are not completely understood, nor how long it takes the molecules to transform from one spin isomer to the other," said Salvatore Mamone, a post-doctoral physicist at the University of Southampton and lead author on the JCP paper. "To study this, we had to figure out how to reduce the strong intermolecular interactions that are responsible for aggregation and lower the rotational mobility of the water molecules."

The answer was to use chemical reactions to open a hole in fullerene (C60, also known as a buckyball) spheres, inject water molecules and then close the "cages" to form a complex referred to as [email protected] "At the end of this synthetic preparation nicknamed ‘molecular surgery,' we find that 70 to 90 percent of the cages are filled, giving us a significant quantity of water molecules to examine," Mamone said. "Because the [water] molecules are kept separated by the cages, there is a large rotational freedom that makes observation of the ortho and para isomers possible."

In their experiment, the researchers quickly cooled the individual [email protected] samples from 50 Kelvin (minus 223 degrees Celsius) to 5 K (minus 268 degrees Celsius) and then monitored their NMR signal every few minutes over several days.

"As the observed NMR signal is proportional to the amount of ortho-water in the sample [para-water with its spin number of 0 is "NMR silent"], we can track the percentages of ortho and para isomers at any time and any temperature," Mamone explained. "At 50 K, we find that 75 percent of the water molecules are ortho, while at 5 K, they become almost 100 percent para. Therefore, we know that after the quick temperature jump, equilibrium is restored by conversion from ortho to para—and we see that conversion in real time."

A surprising outcome of the experiment was that the researchers observed a second-order rate law in the kinetics of the spin conversion which proves that pairs of molecules have to interact for conversion to occur. "Previous studies have speculated that other nuclear spins can cause conversion but we found this not to be the case for [email protected]," Mamone said.

Next up, the research team plans to study the roles of isomer concentrations and temperature in the conversion process, the conversion of para-water to ortho ("back conversion"), how to detect single ortho- and para-water molecules on surfaces, and spin isomers in other fullerene-caged molecules.