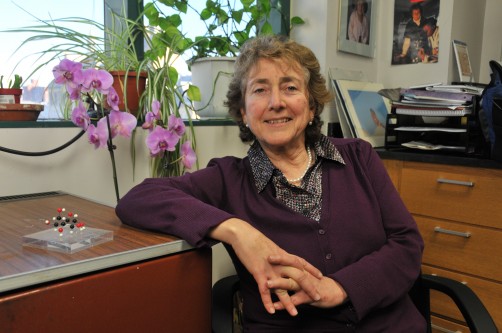 Miriam Greenberg, Ph.D., professor of biological sciences in the College of Liberal Arts and Sciences at Wayne State University

Miriam Greenberg, Ph.D., professor of biological sciences in the College of Liberal Arts and Sciences at Wayne State University

Newswise — DETROIT — The Barth Syndrome Foundation recently announced awardees from its 2017 grant cycle. Miriam Greenberg, Ph.D., professor of biological sciences in the College of Liberal Arts and Sciences at Wayne State University and a resident of Ann Arbor, Michigan, received a one-year, $50,000 grant for the project, “Cardiolipin activates pyruvate dehydrogenase (PDH) – a potential new target for treatment of Barth syndrome.”

Barth syndrome (BTHS) is a rare and life-threatening, X-linked genetic disorder that primarily affects males and is passed from mother to son; women who are carriers do not show symptoms of the disorder. Fifty percent of children born to a mother who is a carrier will inherit the defective gene, and all daughters born to an affected man will be carriers. BTHS is caused by a mutation in the tafazzin gene that results in decreased production of cardiolipin, an essential lipid for energy metabolism.

Greenberg and her team will test the hypothesis that cardiolipin (CL) deficiency results in a deviation of the metabolic pathway for energy production, specifically due to decreased activity of the enzyme pyruvate dehydrogenase (PDH).

Wayne State University is one of the nation’s pre-eminent public research institutions in an urban setting. Through its multidisciplinary approach to research and education, and its ongoing collaboration with government, industry and other institutions, the university seeks to enhance economic growth and improve the quality of life in the city of Detroit, the state of Michigan and throughout the world. For more information about research at Wayne State University, visit http://www.research.wayne.edu.