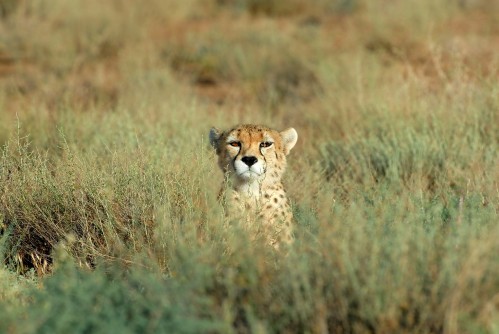 Asiatic cheetahs are indirectly impacted by diseases affecting their prey species including wild goats and sheep.

Newswise — TEHRAN, Iran (November 24, 2017) – WCS and Iranian scientists are collaborating to tackle wildlife diseases – a rapidly growing threat affecting many of Asia’s remaining great wildlife assemblages. To draw attention to this issue, WCS has collaborated on the first-ever Persian-language field guide on major diseases impacting Iran’s wildlife. The book is written by Dr. Iman Memarian, the chief veterinarian at the Tehran Zoo.

The guide describes a range of wildlife diseases – many of which are becoming more common due to increasing numbers of domestic livestock. Diseases such as Peste des Petits Ruminants (PPR) are readily spread from livestock to wildlife and have gravely impacted wildlife across Central Asia. Habitat loss, drought, and a growing human population have further exacerbated the spread of diseases.

Said Dr. Stephane Ostrowski, WCS Ecosystem Health Manager and Veterinarian for West and Central Asia, who worked closely on the field guide: “Solving the issue of wildlife disease cannot be done by one country or one organization. Diseases do not recognize political boundaries, which is why it is so important to partner across borders to come up with solutions to prevent and mitigate them.”

Many of those populations are only a fraction of what they once numbered. Asiatic cheetah are down to their last 50-100 animals, all in the central deserts of Iran. Saiga and Tibetan antelope dropped from the millions to under 100,000 each in just a few decades – for saiga it was an astonishing 97 percent decline.

While the two antelope species have seen a slow improvement in numbers, saiga have recently experienced a series of massive die-offs from disease, losing half their global population in just two years. The main Kazakhstan population lost over 150,000 animals or more than 75 percent of its population in just a few weeks in 2015 from a Pasteurella disease outbreak, and just this past year over 50 percent of the remaining population in Mongolia died from PPR. For Asiatic cheetahs in Iran, diseases including PPR are impacting prey species such as Persian ibex, urial sheep, goitered gazelle and chinkara gazelle.

At a recent ceremony in Tehran announcing the book, Dr. Memarian mentioned the importance of collaborating with partners including Dr. Ostrowski and Houman Jowkar, director for Conservation of Asiatic Cheetah Project (CACP). The book’s foreword emphasizes the importance of zoos in conservation, noting the growing role of the Tehran Zoo in disseminating knowledge on animal care and veterinary medicine.

The new field guide is part of an ongoing effort by WCS to disseminate knowledge on wildlife diseases across the Persian speaking world. In 2011, WCS produced a book with funding from USAID on wildlife diseases in Afghanistan, printing 2000 copies in Dari and Pashto languages respectively. The book was disseminated across veterinary schools, institutions, and animal health professionals in Afghanistan.

The new book was partially funded by WCS through the Flora Family Foundation.