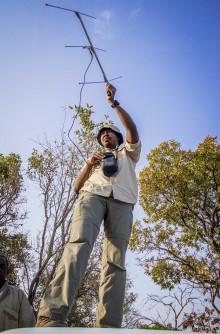 WCS scientist and field conservationist Nachamada Geoffrey has been nominated for the Tusk Award for Conservation in Africa for his efforts to protect Nigeriaâ€™s remaining elephants and other important wildlife in Yankari Game Reserve.

Newswise — NEW YORK (June 28, 2017) – WCS scientist and field conservationist Nachamada Geoffrey has been nominated for the Tusk Award for Conservation in Africa for his efforts to protect Nigeria’s remaining elephants and other important wildlife in Yankari Game Reserve.

Geoffrey, the Director of the Yankari Landscape Project for WCS’s Nigeria Country Program, is one of three finalists for the prestigious award, presented to individuals for noteworthy achievements in African conservation.

The Tusk Conservation Awards are presented annually in partnership with Investec Asset Management. The winner of the Tusk Award for Conservation in Africa will be announced on October 4, 2017, in Cape Town, South Africa.

“Nachamada has made significant progress in stopping elephant poaching in the Yankari Game Reserve and boosting morale of rangers under his supervision,” said Andrew Dunn, Director of WCS’s Nigeria Country Program. “His nomination is well deserved.”

Geoffrey’s management of a team of rangers in Yankari started in 2014, when discoveries of elephant carcasses in the game reserve were averaging 10 incidents annually. Since that time, poaching incidents have decreased dramatically as a result of increased patrols and Geoffrey’s implementation of SMART (Spatial Monitoring and Reporting Tool), conservation software designed to improve the effectiveness of anti-poaching efforts in the field. No instances of elephant poaching were recorded in Yankari during 2016.

Other changes initiated during Geoffrey’s leadership include the implementation of a zero tolerance policy for cattle grazing in the reserve, increased discipline and training for rangers, and a requirement that only properly armed rangers go on patrol. Well-armed poachers and herders have been known to use deadly force against rangers, and Geoffrey routinely places himself at the front of the line, demonstrating the leadership his rangers have grown to respect and emulate.

Geoffrey holds a BSc in Natural and Environmental Science from the American University in Nigeria and an MSc in Primate Conservation from Oxford Brookes University, where he was awarded a scholarship in 2011. Geoffrey’s first experience in the Yankari Game Reserve was as an award recipient through the Conservation Leadership Program (CLP), a prize that resulted in an internship with WCS-Nigeria.

“Nachamada is a role model for other rangers across Africa who are risking their lives in order to safeguard the planet’s natural heritage,” said Dr. Tim Tear, Executive Director for WCS’s Africa Program. “His nomination is a source of pride for WCS and the entire conservation community.”

WCS manages the Yankari Game Reserve in partnership with the Bauchi State Government. The reserve contains one of the largest remaining elephant populations in West Africa.

Tusk is a dynamic and pioneering organization with over 25 years of experience initiating and funding conservation, community development and environmental education programmes across Africa.

96 Elephants WCS is leading global efforts to save Africa’s elephants and end the current poaching and ivory trafficking crisis. In September 2013, WCS launched its 96 Elephants campaign to amplify and support the Clinton Global Initiative (CGI) “Partnership to Save Africa’s Elephants” by stopping the killing, stopping the trafficking, and stopping the demand. The WCS campaign focuses on: securing effective moratoria on sales of ivory; bolstering elephant protection; and educating the public about the link between ivory consumption and the elephant poaching crisis. www.96elephants.org