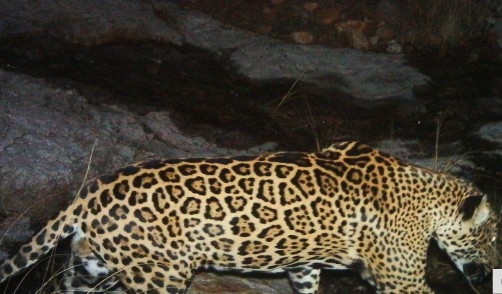 This adult male jaguar has been photographed in two separate southern Arizona mountain ranges by motion-detection wildlife monitoring cameras. The images were collected as part of part of a U.S. Fish and Wildlife Service/Department of Homeland Security-funded jaguar survey conducted by University of Arizona through June 2015. WCS played a critical role in informing the position of USFWS on jaguar conservation by providing the best available science and research to guide and support the plan.

Newswise — New York (December 19, 2016) – A recovery plan for the Western Hemisphere’s largest cat species along the U.S.-Mexico border was released today by the U.S. Fish and Wildlife Service (USFWS). WCS played a critical role in informing the position of USFWS on jaguar conservation by providing the best available science and research to guide and support the plan.

WCS scientists conducted an exhaustive synthesis of all known jaguar observations in the northern part of its range since the 16th Century. The accuracy, precision, and reliability of observations over such a long period of history vary greatly, so WCS built a novel database structure to account for the types of criteria team members might use to include or exclude observations from consideration.

“Recent and verifiable sightings of the jaguar in places such as Arizona may indicate that viable habitat for this species still exists in the United States,” said Senior Conservation Ecologist Eric Sanderson, who led the research effort for WCS. “The database provides wildlife scientists with instant information about where jaguars were observed, or in some cases hunted, in the past in both the southwestern U.S. and northern Mexico.”

John Polisar, Coordinator of the WCS Jaguar Conservation Program, and a large group of scientists within and outside WCS, wrote the most authoritative guide produced to date on jaguar survey and monitoring techniques and methodologies relevant to the northern part of their range. The survey and monitoring protocol they developed for the Jaguar Recovery Team served as the scientific foundation for monitoring and decisions by the USFWS about how to structure their Jaguar Recovery Plan.

The public can view the new database through an online interface created by WCS developer Kim Fisher and access more than 400 observations of jaguars across the northern part of their range: http://jaguardata.info/. Because it is comprehensive, instantly reflects the user's criteria, and can be easily updated by an administrator, the database gives the public an extraordinary data exploration tool for understanding the northern range of the jaguar over time.

Sanderson and Fisher modeled potential jaguar habitat across the northern part of the range by working closely with the experts on the Jaguar Recovery Team to correlate subsets of the observations data with vegetation, terrain, water, human influence, and other ecological spatial data. This modeled habitat was correlated with existing surveys of jaguars in the Mexican portion of the area to estimate carrying capacity, or the number of jaguars an area could potentially support in the absence of threats. The report on this work (https://goo.gl/gu19cr) shows support for significant jaguar populations south of the US-Mexico border and the potential for jaguars north of the border. Habitat estimates were used by colleagues at the IUCN's Conservation Breeding Specialist Group to estimate population viability over time.

In addition, the database includes a habitat model that depicts the pathways of greatest movement probability across existing or planned roads or other linear infrastructure; WCS pinpointed the best places to plan road crossing structures to mitigate the barriers.

All WCS analyses and reports referred to herein may be downloaded from https://www.fws.gov/southwest/es/arizona/Jaguar.htm.

WCS (Wildlife Conservation Society)MISSION: WCS saves wildlife and wild places worldwide through science, conservation action, education, and inspiring people to value nature. To achieve our mission, WCS, based at the Bronx Zoo, harnesses the power of its Global Conservation Program in nearly 60 nations and in all the world’s oceans and its five wildlife parks in New York City, visited by 4 million people annually. WCS combines its expertise in the field, zoos, and aquarium to achieve its conservation mission. Visit: newsroom.wcs.org Follow: @WCSNewsroom. For more information: 347-840-1242. # # #