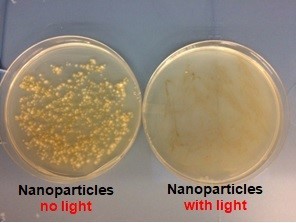 Bacteria with nanoparticle photosensitizers grow before illumination (left), but are killed after illumination (right) as oxygen is activated.

Newswise — BOSTON, Aug. 19, 2018 — The life-threatening bacteria called MRSA can cripple a hospital since it spreads quickly and is resistant to treatment. But scientists report that they are now making advances in a new technique that avoids antibiotics. Instead, they are using light to activate oxygen, which then wipes out antibiotic-resistant bacteria. The method also could be used to treat other microbial infections, and possibly even cancer.

The researchers are presenting their results today at the 256th National Meeting & Exposition of the American Chemical Society (ACS). ACS, the world’s largest scientific society, is holding the meeting here through Thursday. It features more than 10,000 presentations on a wide range of science topics.

Clinical facilities currently have few alternatives when trying to rid their patients of MRSA (methicillin-resistant Staphylococcus aureus). The Veterans Health Care System, for example, hires infection prevention staff to track hand hygiene. Going even further, one recent study found that disinfecting every patient admitted to an acute-care setting cut the rate of bloodstream infections in half. However, this procedure isn’t feasible at most hospitals.

“Instead of resorting to antibiotics, which no longer work against some bacteria like MRSA, we use photosensitizers, mostly dye molecules, that become excited when illuminated with light,” Peng Zhang, Ph.D., says. “Then, the photosensitizers convert oxygen into reactive oxygen species that attack the bacteria.”

Although other teams have experimented with using these types of photocatalysts to kill bacteria, they did not destroy enough microorganisms to effectively shake off infections. Photosensitizers in a molecular form tend to not be corralled enough to do significant damage. In addition, many of them are hydrophobic. This makes it difficult to disperse them in aqueous media where microorganisms typically exist. To overcome these challenges, Zhang’s group collaborated with Neil Ayres, Ph.D., and his team. Both are at the University of Cincinnati. They set out to design a new, water-dispersible, hybrid photosensitizer — one that includes noble metal nanoparticles decorated with amphiphilic polymers to entrap the molecular photosensitizers.

The team showed that the new nanoparticle photosensitizer was much more effective at killing a variety of bacteria than corresponding formulations that did not contain the metal particles. According to Zhang, these nanoparticles provide two benefits. The metal has a plasmonic enhancement effect that promotes the generation of more reactive oxygen species, while also concentrating the photosensitizers in one place for a more localized hit to the bacterial cells.

Zhang explains it this way: “If you want to attack a castle, and you just let all these people attack individually, it is not very effective. Instead, if you have the same number of people grouped together attacking the castle at one point, it is possible to cause more damage.”

Zhang has a patent related to the design of hybrid photosensitizers, which can be formulated into a spray or gel. He says that once the spray is developed into a product, medical professionals could put it on any surface and then illuminate it with blue or red light to clean away the bacteria, including MRSA, that may be present. Zhang also says that the method shows promise in direct wound applications to eliminate infection and assist in healing. He has recently performed experiments on laboratory samples of human skin and found that the photosensitizer didn’t kill skin cells.

The researchers acknowledge support and funding from a University of Cincinnati Technology Accelerator award and the donors of the American Chemical Society Petroleum Research Fund.

Staphylococcus aureus (MRSA) has become one of the major causes of various infections, leading to morbidity in both healthy and immune-compromised populations worldwide. Herein, we report a novel type of hybrid photosensitizer based on amphiphilic block copolymer functionalized gold nanoparticles. The design of the nanoparticles provides a facile means to incorporate hydrophobic photosensitizing molecules for use in aqueous media. The hybrid photosensitizers display greatly enhanced singlet oxygen generation and outstanding photodynamic inactivation efficacy against MRSA under light illumination. These hybrid photosensitizers greatly improve the effectiveness of photodynamic inactivation against MRSA while not involving antibiotics.