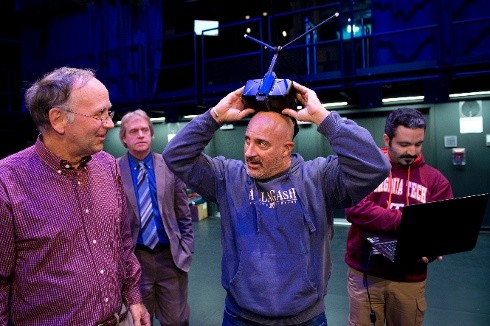 The Weather Channel's Jim Cantore dons a sophisticated virtual reality headset alongside Bill Carstensen (left), a professor and head of the Department of Geography at Virginia Tech. With them is Ben Knapp, director of the Institute of Creativity, Arts, and Technology. A Virginia Tech doctoral student (right) queues the simulation. 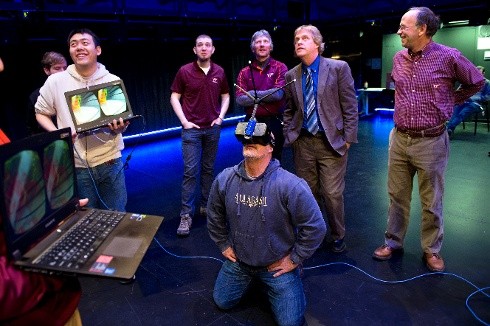 The Weather Channel's Jim Cantore using a headset that shows a virtual reality style view of the activity in a tornado.

Newswise — When The Weather Channel meteorologist Jim Cantore stepped into an EF-5 tornado re-created in 3-D in a four-story immersive installation at Virginia Tech, his perspective was that of someone 7,000 feet tall.

Beneath him was the landscape of Moore, Oklahoma. Around him was the storm that killed 24 people in May 2013.

With support from Virginia Tech’s Institute of Creativity, Arts, and Technology, a student and faculty team from the geography department in the College of Natural Resources and Environment created the storm in the Moss Arts Center facility known as the Cube — a highly adaptable space for research and experimentation in immersive environments.

Cantore was tipped off by Kathryn Prociv, a Virginia Tech geography graduate who is now a producer at The Weather Channel.

She had been a storm chaser with the Virginia Tech team for three years before completing her master’s degree research on the effects of changes in land surfaces on rotating storm intensity in the Appalachian Mountain region.

When Prociv asked her former instructor Dave Carroll what was happening at her alma mater, he told her about the tornado re-creation in the Cube. Cantore promptly made arrangements to visit, accompanied by Greg Forbes, The Weather Channel’s severe weather expert.

Real weather delayed the visit a few months, but on Feb. 6 Cantore was immersed in the re-created storm and broadcasting live.

The project was born when Bill Carstensen, a professor and head of the Department of Geography, told Benjamin Knapp, director of the Institute of Creativity, Arts, and Technology, about Carroll’s 3-D images of storms.

Subsequently, a $25,000 Science, Engineering, Art, and Design grant from the institute made it possible to hire Kenyon Gladu of Troutville, Virginia, a junior majoring in meteorology, and Trevor White of Henrico, Virginia, a master’s student in geography.

Gladu worked with radar data and White did the programming to retrieve the needed NEXRAD (Next-Generation Radar) data and render it appropriately. Institute staffer Run Yu of Beijing, China, a computer science doctoral student in the College of Engineering, placed the storm in the cube.

“We decided to produce that tornadic supercell because it was a catastrophic event,” said Carroll. He was south of Moore with the Virginia Tech storm chase team at the time it occurred. The team members can often safely position themselves within a mile of a storm, but not in that instance.

“It formed in the suburbs of Oklahoma City. We couldn’t engage the storm because of the hazards in that environment — traffic, people fleeing,” he said. “We had to back off.”

“People on the ground could not observe that storm from all angles and directions,” said Carstensen. “But NEXRAD radar captured data throughout the storm. It provided hundreds of thousands of data points in 3-D with several attributes at each data point, including the intensity of precipitation and the direction and speed of floating particulates.

“Our meteorology degree program ties in geospatial science with weather data — to meld atmospheric data with ground data. Geospatial science can register ground data — the rolling hills of Oklahoma and the land cover, such as agriculture, prairie, forests, and urban development. So in this re-creation of the Moore storm, there is the land cover on the ground and the storm above in perfect position.”

The Cube allows complete tracking of where a subject is standing, moving, and looking. An Oculus head-mounted display provides an image of what the subject would see from any vantage point. If there are two people in the cube, they will see each other as avatars and will be able to see different points of view and exchange information.

“Eventually, you will be able to zoom in, to control the scale of what you see,” said Carstensen.

“It’s like a game environment in which you are embedded in the computer,” explained Carroll. “You can then study storms from different perspectives than in the field. You can peel away the outer layers of rain so you can see the business end of the storm. It is a more effective way of looking at storm structure.”

“It will be a valuable tool for researchers, forecasters, and students,” said Carstensen.

The ultimate goal is to bring real-time radar into the Cube — “real time” in this instance being only a four- or five-minute delay. Carstensen and Carroll met with Mike Kleist, a Virginia Tech mathematics graduate who is now vice president of engineering at Weather Services International (WSI), a weather graphics software company.

“Mike said real time was absolutely doable,” said Carstensen. “We could visualize the whole East Coast, or any place that has been mapped, overlain by a snow storm, or a storm surge model.”

“This has great potential for emergency managers,” said Carroll. 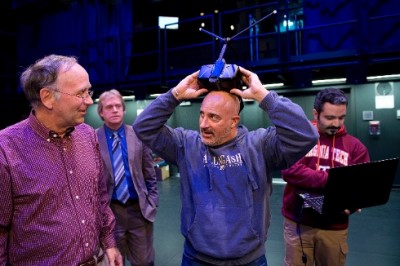 Caption: The Weather Channel's Jim Cantore dons a sophisticated virtual reality headset alongside Bill Carstensen (left), a professor and head of the Department of Geography at Virginia Tech. With them is Ben Knapp, director of the Institute of Creativity, Arts, and Technology. A Virginia Tech doctoral student (right) queues the simulation. 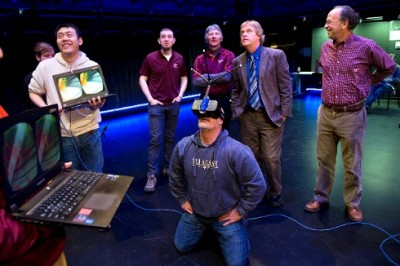 Caption: The Weather Channel's Jim Cantore using a headset that shows a virtual reality style view of the activity in a tornado.