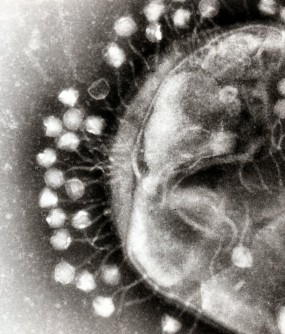 Image of a phage, an invasive virus that attacks bacteria

Newswise — It may come as a bit of a surprise to learn that bacteria have an immune system – in their case, to fight off invasive viruses called phages. And like any immune system – from single-celled to human – the first challenge of the bacterial immune system is to detect the difference between “foreign” and “self.” This is far from simple, as viruses and bacteria – in fact, all living things – are made of DNA and proteins. A group of researchers at the Weizmann Institute of Science and Tel Aviv University has now revealed exactly how bacteria do this. Their results were published online in Nature on April 13.

“In most environments, phages are around ten times more abundant than bacteria. And, like all viruses, phages use the host cell’s replication machinery to make copies of themselves,” says Prof. Rotem Sorek of the Weizmann Institute’s Department of Molecular Genetics. “And they are constantly evolving new ways to do this. So bacteria need a very active immune system to survive.”

But until recently, scientists were not even sure that bacteria had a so-called adaptive immune system – one that “remembers” a past encounter to produce a targeted response. That changed several years ago when a bacterial adaptive system called CRISPR was discovered. The CRISPR immune mechanism is not just crucial to the bacteria; it has a major impact on our daily lives. For example, it is used to protect the “good” bacteria that make yogurt and cheese. And it may also affect our future, as scientists have figured out how to use the ingenious CRISPR system to “edit” the human genome – making it a handy tool for a wide range of clinical applications.

To remember an infection, the CRISPR system grabs a short sequence from the invading viral DNA and inserts it straight into the bacterial genome. The bits of phage DNA are stored in special sections of the genome, forming the immune memory. In subsequent infections, CRISPR uses these sequences to create short strands of RNA that fit the genetic sequence of the phages’ kin. Protein complexes attached to the RNA then identify the phage DNA and destroy it.

Selectivity is clearly an issue for such a system. Previous research in Prof. Sorek’s lab had shown that mistakenly grabbing bits of self-DNA can cause the bacterial cell to suffer a sort of autoimmune disease in which it attacks its own DNA, and the results may be fatal to the bacteria. With around 100 times more self than foreign DNA inside the cell, says Prof. Sorek, there would seem to be room for many more mistakes than researchers have actually observed.

How does the CRISPR system know how to insert foreign, rather than self, bits of DNA into the immune memory? Prof. Sorek and his research student Asaf Levy teamed up with Prof. Udi Qimron and Moran Goren of Tel Aviv University to answer the question in detail, revealing a complex, multi-step mechanism for this part of the CRISPR process.

They devised an experimental setup using plasmids – short, circular pieces of DNA that mimic viruses – and injected them into bacteria cells. These bacteria had two proteins known as Cas1 and Cas2 – parts of the CRISPR system that are responsible for acquiring the pieces of foreign DNA. The CRISPR system successfully incorporated the plasmid DNA into the bacterial genome, while the “self” DNA was only rarely attacked. The team recorded some 38 million separate immunization events.

Looking more closely at the results, the team found that the CRISPR system, using Cas1 and 2, specifically identifies DNA that replicates rapidly. Thus, ironically, it is the phage’s own survival tactic – its programmed drive to replicate at all costs – that proves to be its downfall.

“Still,” says Prof. Sorek, “this did not completely explain how the CRISPR system differentiates between self and non-self.”

The solution came from deeper understanding of the process. During DNA replication, small breaks occur frequently in the DNA; these breaks call up a DNA repair enzyme that “nibbles” a bit of the broken DNA. The team discovered that the “leftovers” from the repair machinery’s nibbling are actually the source of the viral DNA used by the CRISPR system to generate the bacterium’s immune memory. But when that repair enzyme meets a short sequence called a “Chi site,” its nibbling stops. Such Chi sequences are found very frequently throughout the bacterial genome, but rarely in the viral one. So Chi sites also serve as “self” markers: they reject the activity of the CRISPR machinery when they are present, but enable it to use bits of phage DNA if they are missing.

Thus, the bacterial cell uses its normal DNA replication and repair processes to identify phage DNA, checking and double-checking that the new DNA differs in two fundamental ways from the “self” genome. Through the activity of the CRISPR proteins Cas1 and Cas2, the bacterial immune system can ensure that it is adding only foreign DNA to its immune “memory,” and can, therefore, activate its defenses.

Prof. Sorek says that “Solving the riddle of self versus non-self for the bacterial immune system and deciphering the exact mechanism of this step in the CRISPR process gives us important insight into the unseen confrontation that is taking place everywhere, all around us, all the time.” Prof. Qimron continues, “The bacterial solution to evading autoimmunity might be utilized in future clinical applications that take advantage of the CRISPR system.”

Dr. Rotem Sorek’s research is supported by the Dana and Yossie Hollander Center for Structural Proteomics; the Abisch Frenkel Foundation for the Promotion of Life Sciences; the European Research Council; the Leona M. and Harry B. Helmsley Charitable Trust; the Hugo and Valerie Ramniceanu Foundation; the Dr. Dvora and Haim Teitelbaum Endowment Fund; Mr. Martin Kushner Schnur in honor of Fanny Kushner; and the estate of Samuel and Alwyn J. Weber.