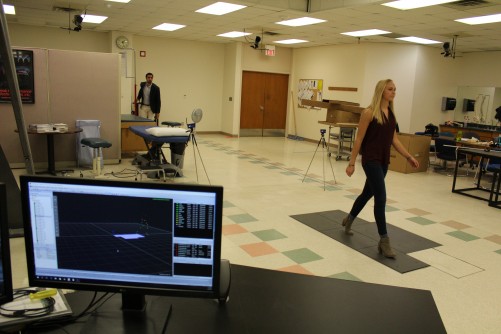 Newswise — They were once daily wear for most women in the middle part of the last century. Now, high-heeled shoes are typically only the province of women in business or broken out for special occasions.

Whatever the circumstance, a pair of Creighton University undergraduates in the College of Arts and Sciences are collecting data on women in heels with an eye on the health effects of the shoes, especially as it pertains to lower back problems and the potential earlier onset of osteoarthritis in the knee. They also hope to be able to make a recommendation on which style of heel — wedge, platform or stiletto — makes for the safest walk.

“It’s been an interesting process,” said Lindsay Durand, a junior exercise science major who kicked off the research in the fall and presented her early findings at Honors Day in April. “The research has definitely opened other doors for me. I always thought I’d be working with a sports team but I’ve become more interested in women’s health, working on this project.”

With fellow junior and exercise science major Amy Clysdale and four subjects who agreed to spend six hours walking in the three different heel styles — all at three inches high, an inch taller than the two-inch height defining a shoe as high-heeled —, Durand used the revamped Rehabilitation Laboratory in the Boyne Building, complete with a new set of force plates for better measuring walking gait, to accomplish the data collection.

The lab is also outfitted with a battery of wall-mounted cameras which can record a subject’s gait from multiple angles. When a subject is wearing reflective markers, the markers can also transmit data to a computer program measuring force.

Using a tennis shoe as a control, Durand and Clysdale undertook to determine the velocity differentials between the control and the different high-heel styles, and the descriptions of movement involved in walking in each shoe. Each subject walked in each shoe style three separate times.

“My mom wears high heels all the time and I wear them sometimes, too,” Clysdale said. “It’s always interested me what the effects could be — whether you’re better off in a wedge or not. There’s a lot we’re learning here.”

So far, it looks like the wedge shoe — with its solid composition between heel and sole — looks like the most stable piece of footwear. Durand and Clysdale have also observed that there are larger amounts of force on the knee coming from outside, as opposed to the equal forces at work from inside and outside when a subject is walking in tennis shoes.

The research is being overseen by Dimitrios Katsavelis, PhD, in the Department of Exercise Science, and Jennifer Bagwell, PhD, DPT, in the Department of Physical Therapy in the School of Pharmacy and Health Professions. Both Durand and Clysdale plan to enroll in physical therapy school following their Creighton graduations.

“It is a new strain of research that we have not seen in the literature to date,” said Katsavelis, who said the project opened up as a result of an anatomy class he taught last summer and in which Durand was enrolled. “My wife wears high heels — really high, sometimes five inches or so — and it’s always been an interest of mine as to how the body handles that. There’s more we hope to do with this research, so many ways we can go with it.”

Bagwell said the project, along with the use of the new Rehabilitation Lab, has made for a prosperous interprofessional alliance as the students and faculty ponder the pendulous prospect of life in high heels.

“It’s been a very positive collaboration between departments,” Bagwell said. “It’s a good demonstration of how exercise science and physical therapy work together and how the research can overlap.”

Following this initial foray, the plan is to collect more data from a larger sample population and gather more evidence for a potential publication. The students would like to expand to 12 subjects and study a fuller visual and three-dimensional analysis using the cameras and sensors. Other measurements including the center of pressure, balance, propulsion and the high frequency phenomenon observed when a high heel strikes the ground may have more to tell the researchers about the shoes and the safest way to display and be mobile in haute couture footwear.

“I think everyone who has worn high heels has, at one time or another, fallen in them,” Durand said. “What is that fall risk? How could we address that? We’d like to collect more data and see where else the research can take us.”